LONDON THEATRE: Lend Me a Tenor: The Musical??

I have to admit two things:  Lend Me a Tenor - both the original production and the recent revival - is one of my favorite comedies.  I've seen many productions of it, mostly good.  The other thing I have to admit is that I often see plays, go to movies and read books and think, "Wow!  That would make a great musical!"

Lend Me a Tenor was not one of those works.  And so, several years ago, when it was announced that the British were taking an American farce and making it into a musical, I was skeptical.  I'd have bet Love Never Dies would be an international sensation before I'd bet that Lend Me a Tenor would be made into a toe-tapping tuner.

The London musical title logo
Sure it has the larger than life characters, the insane situation, and even a legitimate reason to sing.  But how do you turn a one set, door slamming play into a full fledged song and dance extravaganza?  I'm still trying to wrap my head around it.

But in theatre the sure bets often lose and the out there stuff becomes a hit.  And guess what?  Lend Me a Tenor: The Musical is not only happening, it is now touring Great Britain en route to the West End!  OK, Ok... so it opened at the Utah Shakespearean Festival in 2007, but went nowhere... But now it stars Sally Ann Triplett as Maria, and she ain't no slouch.  This must be serious. 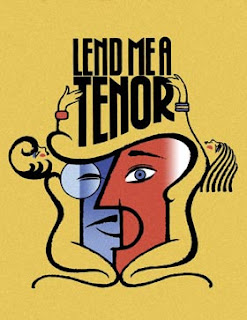 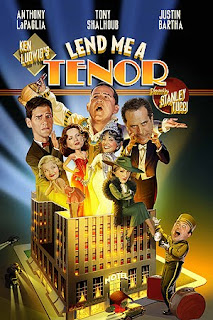 The Broadway revival logo
I don't know that much about it, yet, as it just started, but looking at the cast list (27 strong) - much expanded from the play - you can see where they have expanded it.  There are characters called "Opera Guild Ladies."  One can assume that there must then be scenes at the opera that is only talked about in the play.  I guess we will get to see Max (Victor Garber or Justin Bartha, here) go on as "Il Stupendo" (Ron Holgate or Anthony LaPaglia, here).  And we'll get to see Diana, the soprano, do Otello (Caroline Lagerfeldt or Jennifer Laura Thompson, here) with Max.  I just hope that they write a great comedic aria for Morelli's much-suffering wife, Maria (Tovah Felshuh or Jan Maxwell, here)!

The full London logo
If this is a hit, maybe they'll turn Equus into a musical next!

Comments?  Leave one here or email me at jkstheatrescene@yahoo.com or Tweet me!
Jeff
2.36
Posted by JK at 12:01 PM