Glee: Best Revival of a Musical?

THE FOLLOWING BLOG CONTAINS PLOT SPOILERS ABOUT THE OCTOBER 26TH EPISODE OF GLEE.

What an interesting two weeks for Glee, the nation's hottest TV show.  In the two weeks since an original episode aired, the show has been all over the news.

In typical fashion, the media can't let a good thing go on without stirring up ugly.  Not that the Glee kids didn't have a part in it.  I'm talking, of course, about the racy and controversial photo shoot for GQ which had the three principal stars (Cory Monteith, Lea Michele and Diana Agron) in "hyped-up" - read sexualized - versions of their characters.  Parents cried, "Foul!"  How would they ever explain this to their 9 year old daughters who are rabid gleeks?  Easy.  It is an adult magazine that your 9 year old has no business even knowing about, let alone seeing.  And never mind that all of the cast is actually adult, a fact that the show even plays up occasionally.  Sure, the pictures are a risque, and maybe keeping an image of wholesomeness would have been wiser.  But, really folks.  If you want your kids to be completely sanitized, stick to the Disney Channel.  Oh, wait... Britney, Christina, Justin and now little Miley all started there.  And look what became of them. 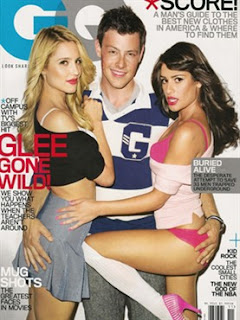 How interesting that this real life issue of Glee pushing boundaries comes just before an episode where the boundaries of art in education are pushed and questioned.  Yes, this is the week where the kids do The Rocky Horror (Glee) Show.  And boy, was it a winner!  Let me preface what follows with the this:  I appreciate Rocky Horror and I enjoyed the Broadway revival, once, but I am not a huge fan, nor fan enough to understand some of the references I am sure the show made.  That said... 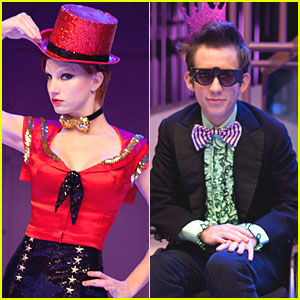 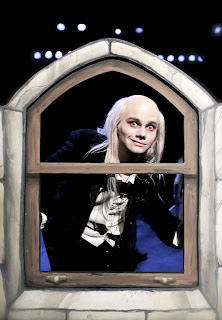 Managing to legitimately work in 7 songs from the stage show/film, many in context of the actual script, the show really managed to give us the fullest flavor allowable by 8PM TV on broadcast television.  Purists, I'm sure will take issue with lyrics changes, but they are perhaps the most realistic part of the episode.  After all, schools are frequently censored in regards to the plays and musicals they produce.  Kurt (Chris Colfer) even mentions the Texas production of RENT that got shut down.  I won't go on a self-righteous diatribe about how I feel about that, but I am glad that the show recognizes the realities of putting on any show, let alone Rocky Horror. 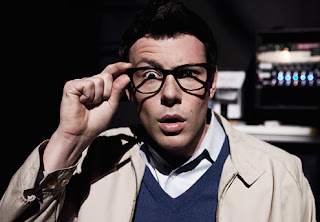 Each number, even out of context of the show, was wonderfully staged, endlessly clever with camera angles and just edgy enough to keep everyone interested.  I knew it was going to be cool with the opening number done just like the film - red lips and nothing else - and a cast list of credits that featured only the character names!  Of course, "The Time Warp" stands out as the most well known song, and they pretty much gave the audience what it expected.  But there were 3 excellent surprises that really made the episode extra fun for this viewer.  First, John Stamos' number was absolutely thrilling.  Man, can he sing and dance!  Why the hell didn't this guy show up in Bye Bye Birdie?  Second was Amber Riley's amazing "Sweet Transvestite".  How great that they worked in some non-traditional casting and recognition that she rarely gets to be a "lead."  And most/best of all...Jayma Mays finally gets to really sing!  And be HOT!  Her "Toucha Toucha Touch Me!" was sublimely funny, sexy and right on given the context of the scene.  GIVE HER MORE TO DO!

Also nice, though, was that the show gave equal time to issues that would definitely come up and need to be addressed.  The constant barrage in the media of the female form and body image is well known, documented and addressed, even as it continues.  But finally someone has taken the other side of the coin and recognized that body image is a serious issue for guys, too.  The show played it mostly for laughs (and more sightings of Chord Overstreet's fabulous body) but the truth is even the most confident male has issues with how he is perceived.  Being cool and not being perceived as gay are addressed frequently in the show, but it was nice to see the two guys watching out for each other, helping each other, and most importantly confiding in each other that they worry about how they look.  I bet a kid made to wear the "traditional" Rocky costume, no matter how terrific he is in shape, would be embarrassed.  And any kid (in this case Monteith's character) who feels he is "big" would agonize over doing a scene in his underwear. 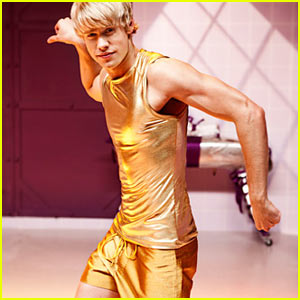 Then there is the parental issue, succinctly but pointedly addressed by Harry Crum's character, whose parents had an issue with him wearing a bustier and playing a transvestite.  And the utter lack of support from a school administrator, leaving the teacher and the kids out to dry should any trouble come up was shamefully true.  In another surprise, for once, even though her intentions were characteristically self-centered, Sue Sylvester's (the always wonderful Jane Lynch) indignant speech of the week was spot on and well-stated, whether you agree with her point or not (I can agree and disagree with what she said, depending upon the given situation about arts in public schools).  Of course, in typical (in the best possible way) Glee fashion, the real points being made turn everything on its ear.

Will (Matthew Morrison) did the show for all the wrong reasons, and he got called on it.  The result?  A private for glee club members only performance, and an important character growth scene for he and Emma, one that will likely bear fruit in the long run.  And Sue said exactly the right thing for all the wrong reasons.  The result?  She got another one over on the glee club, but also lost her personal goal, a local Emmy.  Such is the life on Glee.

Let's hope next year they tackle another musical.  But for now, this might just be the Best Revival of a Musical in 2010.

(Photos from FoxTV.com and TVGuide online, and all are copyrighted by 20th Century Fox Television and Ryan Murphy Productions.)

Comments?  Leave one here, email me at jkstheatrescene@yahoo.com or Tweet me!
Jeff
2.57
Posted by JK at 12:01 PM