Today marks the first Broadway preview of the new (and maybe last) musical from Kander and Ebb, The Scottsboro Boys.  As such, I thought I'd take a look at their logo and see what I get from it.

First, though, I want to acknowledge the off-Broadway logo.  More austere than the newer one, this is evocative of the event (the prison bar-like lines) and the format of the show (a minstrel figure).  Interesting, but not nearly as "sellable" (I hate to use the word "commercial" as it has a negative connotation) as the newer version.

Now, about that newer version...

I think it is BRILLIANT. 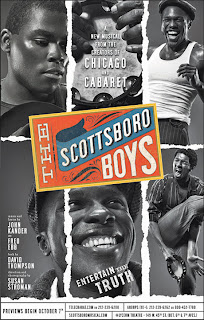 I'll start with the title and work out from there.  The colors are vibrant and bold, definitely reminiscent of both show advertising and the old-South.  A riverboat, for some reason comes to mind, but more for the style of the box than for the actual boat, as I don't believe a riverboat comes into play here.  The type styles used are also mindful of a time period long ago - "THE" almost seams wild west, while the blue banner that holds "SCOTTSBORO" seems to announce a big name, and of course, "BOYS" together with "SCOTTSBORO" really makes the whole thing look like a group - or act - being announces at the local theatre.  Of course, I'm sure much of that assessment stems from the fact that I have read up on the show itself.  Finally, I love how, even though it is in vibrant color, the title has also been somewhat distressed, instantly letting us know that the show hearkens back to days, and entertainments past.
Speaking of entertainment, I really think the catchphrase "Entertain the Truth" really hits the mark, especially if you go in knowing some history.  It is a perfect catchphrase because it works on two levels.  The minstrel show format of the piece is certainly controversial, and might even be appropriately uncomfortable (not unlike several moments in Kander and Ebb's Cabaret).  And the phrase lets us know that we are being entertained and that the truth is somewhere in there.  Just maybe through the filter of the "entertainment", the "truth" can be found.  And a little masking of the truth through broad entertainment sure makes the difficult issues easier to take.  Just look at the writers' Cabaret, told through the filter of a seedy European cabaret show, and Chicago, told through the filter of a vaudeville show.  Given the racial issues at stake in this true story, a minstrel show seems a logical format for presentation, and the catchphrase captures that. 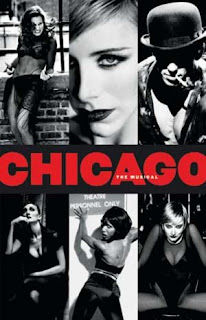 Speaking of Chicago, am I the only one who sees a resemblance between the above poster and the original artwork for the revival of Chicago?  It certainly worked there, and it works here.  The similarities might draw the Chicago crowd (and the " A new musical from the creators of CHICAGO and CABARET" certainly clarifies it), and the differences really sell this particular show.  Instead of sharp black and white photos, these are softer and have a grey sepia tone quality.  The images are much less stark, and much more emotional (the merry murderesses are a cold lot; the boys are the good guys, right?).
The top left photo, a serious, sad man with his hat held to his chest suggests right off the bat that this show will be serious.  The top center photo (the best of all, I think) is of two hands holding a tambourine, and I immediately think musical, but from another era, as tambourines really aren't as prominent as they once were.  Knowing that this is also a minstrel show, I know that tambourines figure prominently in their presentation.  But it is the hands that I think tell a richer story.  Holding the instrument like that insures that it will be silent, and the hands are holding it like a man holding a hat in front of him, while he addresses someone of import, or perhaps as he stands before a judge.  Then, tellingly, before we get too serious, the upper right photo depicts a laughing, smiling man.  He is well-dressed (look at his pants); he still has his hat on, but he has removed his shirt and appears to be sweating.  Perhaps he is feeling joy and/or relief?  And maybe now is the time to play for him.
The bottom two photos again depict the same happy, smiling man, this time in close up, but also more dressed.  Is he the focal point of the show?  Has he just come from a situation where he was to dress nicely and is now happy to be done with it?  Notice, too, that he is looking up at his own image.  The final photograph, a different, and perhaps younger man, is in full celebration/performance mode.  That tambourine is being put to its fullest use, and he is singing and dancing with joy.  This picture should satisfy the musical lover who likes catchy tunes and dancing.
Finally, I love the fact that the photos are torn, which could mean a lot of things, but the placement of the photos makes the jagged edges of the pictures form an image of prison bars.  Enough said.
Grade: A+
(The Scottsboro Boys images from the Vineyard Theatre and SpotCo)
Comments?  Leave one here, email me at jkstheatrescene@yahoo.com or Tweet me!
Jeff
2.37
Posted by JK at 11:33 PM