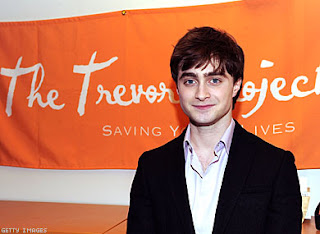 How wonderful to have Broadway make national headlines for something truly great for a change!  It was announced today that Broadway's own Daniel Radcliffe will be the 2011 recipient of the Trevor Project's Hero Award.  He is being so honored for his tireless efforts on behalf of the organization, which provides a hot line and numerous resources for troubled and suicidal gay, lesbian, bisexual, transgendered and questioning youth.  In recent months, he has filmed a PSA for the organization, and has been very outspoken about his beliefs on sexual orientation in general and the work that the Trevor Project does.

Arguably one of the most recognizable people on the entire plant, Radcliffe has said that he grew up knowing many homosexual people through his parents, and that it never occurred to him that there was any reason to think of them as different, let alone be against them or want to hurt them.   One might think that someone of his financial stature and celebrity would try to distance himself from even the whiff of controversy.  Not Daniel Radcliffe, who has taken the lead amongst his generation in the fight for equality for people of a sexual minority.  Other Broadway stars similarly honored in the past include Nathan Lane and Vanessa Williams.  But Radcliffe is the first honored at the same age as the Project's target "audience." 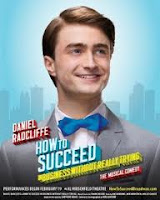 And his humility sets a new standard among young Hollywood types.  About his work for the Trevor Project he says, "Out of everything that I’ve done so far in my career, I think this is absolutely one of the most important, if not the most important, thing that I’m associated with.”  And about this latest honor: "The people that are doing the heroic things are the people answering phones 24 hours a day in the Trevor call centers."
The star of the soon-to-open How to Succeed in Business without Really Trying, has really made a name for himself in the Broadway community, much like frequent visitor and fellow international superstar Hugh Jackman.  In 2008, then starring in Equus, Daniel generated quite a bit of money for Broadway Cares when he'd strip off his jeans, autograph them and auction them off on the spot.

With a guy like this on their side, the work of the Trevor Project, and indeed the world, gets one step closer to a society of full acceptance for everyone.  Radcliffe will receive this honor on June 11, 2011.


Comments?  Leave one here, email me at jkstheatrescene@yahoo.com or Tweet me!