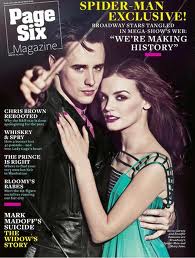 Given the year's (plus) events surrounding the Broadway production of Spider-Man: Turn Off the Dark, one can't help but shake one's head at the sheer amount of time and energy spent by thousands of people to write, comment, discuss, cajole, cheer, late, love this show.  I suppose a lot of things contribute to this: the proliferation of instant-gratification sources of information like websites, message boards and social media, not to mention blogs like this one; the mass media grabbing on to this story and not letting it go; and just the enormity of the production and its budget make it newsworthy.  But these are mostly the means and the initial motive for interest.  It is also the (certainly over-amplified) barrage of drama on the stage, off the stage, behind closed doors and the very human element of injury and danger - both physical and mental.  Everyone loves an underdog, which in many ways this show now is, but people, even more, love to revel in the misery of others when it comes to the mundane and/or the extra-privileged especially.

The saga of Spider-Man has now been chronicled by various outlets.  Its history as a Broadway musical, we now know dates back nearly a decade, with its juiciest history beginning at least two years ago when the production team began renting what is now known as the Foxwoods Theatre.  (I'd love to be that owner- a constant stream of rent money for years and only a little over 100 performances to show for it, not to mention millions in permanent structural upgrades which will outlive this and many more shows.)  And now, with this past week's definitive set of major decisions - firings, rearranging the power structure, hirings, rearranging the show itself - it seems the media has concluded that we are now at an intermission of sorts in this Broadway-sized theatre drama. 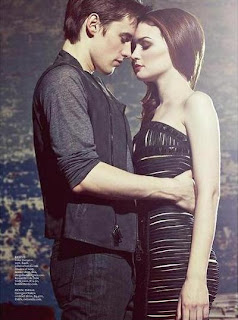 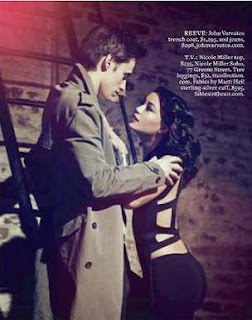 A Smouldering Love Triangle: Talk about your tangled web!
To ring the curtain down, The New York Post has run a major piece that bring a sort of finality to events up to this point.  The Post's famed Page Six, which itself has been home to many a Spidey article, runs a magazine on occasion.  The most recent, clearly done before the axe fell, is an article and photo shoot of the three main stars, Reeve Carney, Jennifer Damiano and TV Carpio.  The photos are sharp and sexy, and actually serve to offer pictorial evidence that the three share an unmistakable chemistry - one often lost to all but the front rows in the cavernous Foxwoods.  The accompanying article does a fairly decent job of accurately letting each tell us how the pressure of it all is effecting them, and each acknowledges trouble without being snarky.  Each also defend director Julie Taymor's temperament and vision; perhaps part "company line," though all sound sincere.  While the photos themselves are here for you to see, I don't have a copy of the actual article.  The online version only gives you the first page.  However, if you go to Mr. Carney's band's website, the entire article has been scanned to the site.  I recommend that you take a look HERE. (You will need to scroll down the page to the 3/10/2011 entry about the article) 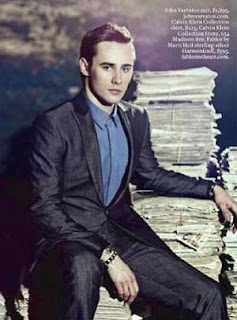 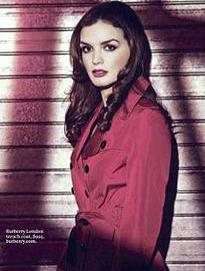 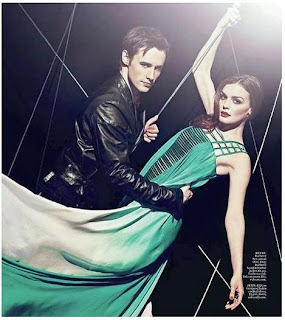 Carney and Damiano:
So young to be in this nasty spotlight!
Who knows how Act Two will play out?  Who will the players be when the dust settles?  What will the show end up like - a Broadway musical or Universal Studios stunt show?  How much of the original "vision" will remain intact?  Will the show get the ultimate revenge and win Best Musical of 2012?  Or will it simply die and become fodder for many a book?  We shall see.  My Spidey-sense is tired and needs this intermission, but it is still all a-tingle in anticipation!