ON THE RADAR: Prometheus Bound

NOTE: SOME OF THE IMAGES BELOW MAY NOT BE CONSIDERED
WORK-SAFE (CONTENT, NOT NUDITY)

When you think of all the larger-than-life drama found in Greek mythology, it is hard to believe that more of it hasn't cropped up in Broadway musicals.  Well, Tony Award winner Steven Sater (Spring Awakening), Grammy Award winner Serj Tankian and Tony nominee (and environmental staging go-to girl) Diane Paulus (Hair) have come together to tell the story of Prometheus as a hard-edged rock musical.  Currently, the piece is being performed at A.R.T. in Boston, where it opened last night.  It stars Tony-nominee Gavin Creel as the title character. 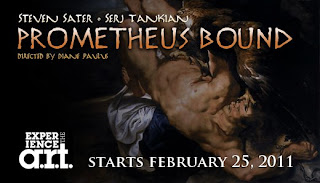 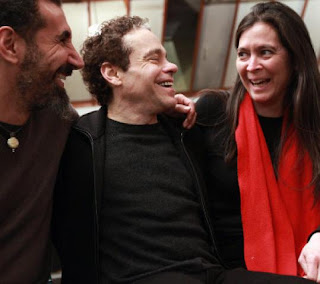 TOP: Classic art version of the logo
BOTTOM: The Collaborators:
Serj Tankian, Steven Sater and Diane Paulus
If you are unfamiliar with the story... Prometheus, a Titan,  is chained on a mountainside as punishment for  having given the gift of fire to the human race, which freed them from their dependence on the gods.  The original epic is by Aeschylus.  This version is staged like a rock concert, with patrons standing mosh-pit style around the main stage and elevated playing spaces throughout the theatre.  As I said, Paulus knows a thing or two about using the whole environment for a theatrical staging. 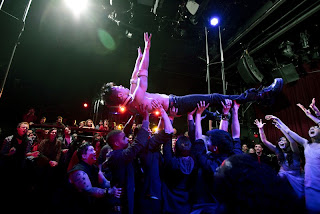 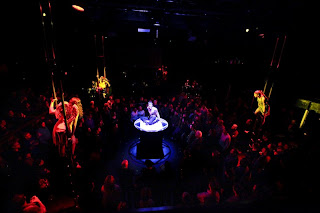 Prometheus in a mosh pit:
100% environmental theater
To be fair, I have nothing to go on about this show beyond some statements about modern democracy and timeliness from Sater, so what I'm about to say may be just pure conjecture on my part.  But from the looks of it, Prometheus Bound has the look of what is becoming a trend - and perhaps even a trend that is growing tired quickly.  Judging from the photos, it looks very similar to - obviously - Spring Awakening  and Hair, but also Bloody Bloody Andrew Jackson and most of all, American Idiot.  A little of this style goes a long way is all I'm saying. 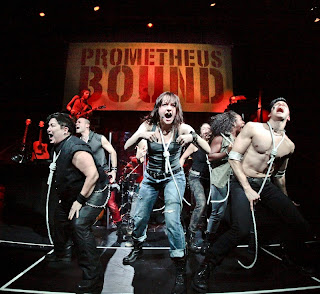 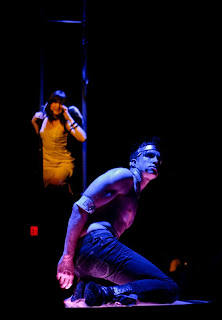 Deja vous?  Or something new?
And the show has already, despite having its first opening night just yesterday, had some impact beyond the theatre, which is usually a great thing.  It has caught the eye of Amnesty International.  And a recent release of the single "The Hunger" from the show will have all proceeds going to that organization.  Click HERE to read more about that. 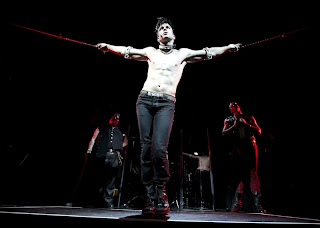 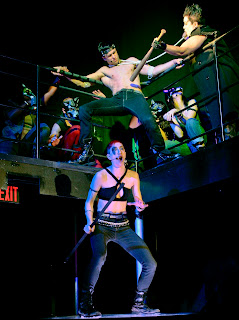 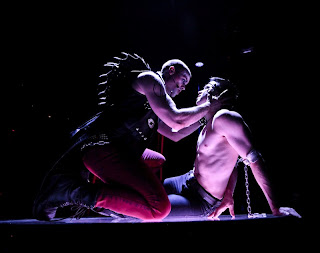 Classic religious imagery with a modern rock sensibility
Even having conjectured the above, I still find the story, staging and star to be worth further attention.  Given the pedigree and caliber of the creative team and members of the cast, it wouldn't be too presumptuous to assume that there are higher hopes for this show past Boston.

Here is a sample of the show:

Comments?  Suggestions for other shows to put "on the radar"?  Leave them here, email me at jkstheatrescene@yahoo.com or Tweet me!
Jeff
2.186
Posted by JK at 12:01 PM