I just don't understand this one.  I mean, I've seen the film it is based upon.  I've been following its gestation to Broadway enough to know that the show takes place in the 70's disco era, the one major change from the film.  And I have given it (probably way too) much thought.  I just do not understand where they are going with the logo/promo art for Sister Act.

OK, I'll concede that even as popular as the film was, uh, still is - it is on cable almost every weekend - maybe trying to sell singing and dancing nuns on Broadway has perplexed the ad people.  Maybe test audiences didn't respond to something closer to the film logo or even a logo with nuns kicking up their heels failed the test.  I would argue that maybe they didn't try hard enough.  After all, Nunsense and all dozen of its sequels have run everywhere and were huge in New York for more than a decade.  And those Nuns on the Run or Nuns Having Fun calendars fly off the shelves every Christmas.  But who am I?  A lowly consumer trying to figure out if I want to shell out nearly $150 for what they are trying to sell down at the Broadway Theatre.  That's who. 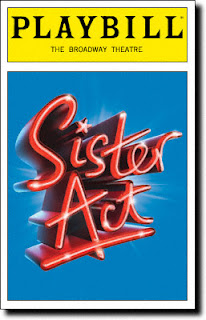 The Logo on the Official Playbill Cover
Let's look at the primary image of the logo, which also happens to be the titling.  A bright blue background is eye-catching.  Ask the folks at 9 to 5: The Musical, A Life in the Theatre, Come Fly Away, How to Succeed in Business..., and, gulp, Spider-Man: Turn Off the Dark.  Looks like blue is several seasons' black on the Great White Way...  Then we have the HUGE words SISTER ACT, which kind of leap out at you with a kind of 3D print effect, but not really.  It is bright red, another eye-catching color, but it is so big and so crammed together at the same time...  and what does the lettering style say to us?  Hmmm...  except the star that dots the "I", I see no real religious reference, or even a show bizzy flare (a nod to the main character's vocation and/or how she makes the boring nuns sing and become stars).  Wait, is the 3D thing supposed to be the show biz flare?  Or is the white highlight that runs through the lettering supposed to make it look like the words are in lights?  No matter what, it looks like someone took a pen to a blank page and was told to write "Sister Act" as fast as they could, and no matter how it turned out, that was the look they'd use.

There are two things I like about it.  One, the "glow" effect behind it does suggest something Heavenly.  I love the subtlety, if that's what that is.  And, two, the tag line, as obvious as it is - a Divine Musical Comedy - at least has something to do with the content of the show. 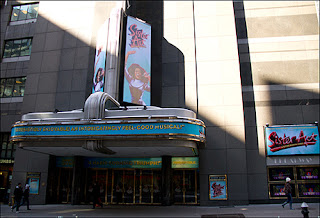 The Logo in action at the Broadway Theatre
There is a big billboard for the show outside the St. James Theatre, which has the title in giant sequins, which I admit really works much better.  Nothing says show biz (or disco era) like giant glitter (someone should mention that to the Priscilla team).  And there are caricatures of smiling, happy (are they singing?) nuns.  Each one is different and silly.  And a step in the right direction.  My first thought was, "are these drawing of the actual cast?  I'll have to come look after I see the show."  Then I remembered that these cuties have adorned the show's website since before it was cast, so clearly that is not the case.  Maybe these are the London nuns on loan?

Is she or isn't she?  No.  She is not.  At least not yet.
The truth is, if all I had to go on was this logo, I'd think "cheap imitation of beloved film."  And I'd buy a ticket to another show.  And to be even more honest, if I didn't know that it wasn't the case, if I was Joe average, occasional show attendee, I'd think Whoopi Goldberg was actually IN Sister Act.  Why?  Because right above the title, in bright lettering (actual show biz flare!) it says "Whoopi Goldberg."  In my excitement, I'd skip right over the "and Stage Entertainment" and totally miss the minuscule "present."  Now, Sister Act, with the star of the film in the Broadway show!!??  Sign me up.

And the sad thing is if you Googled "Whoopi" and "Sister Act musical," you'll get articles that say she was in it.  Yes, in London, right before it closed.  But I'll bet the keyboard I'm typing on that there are people who have purchased tickets thinking that very thing.

I hope the show is better than the logo.  Maybe with a little divine intervention...