DVD: Les Miserables: The 25th Anniversary in Concert. Presented in 2010 at The O2 Arena in London, England, United Kingdom.  Cameron Mackintosh in association with Universal Pictures presents Boublil and Schonberg's Les Miserables based upon the novel by Victor Hugo. Conducted by David Charles Abell. Directed for the Stage by Laurence Connor and James Powell, and for DVD by Nick Morris. 170 minutes.

From the outset, Les Miserables has been epic.  First Victor Hugo's novel, then countless movie adaptations and even a PBS version.  But nothing really prepared the world for the epic piece of musical theatre it would become.  In 1985, clocking in at over 3 and a half hours in length, the show opened at the Barbican Theatre, and it was not a success - a fact that seems to get glossed over in its rosy colored history.  Critics ravaged its length, its simplification of themes and characters, its "atrocious translation," and the sheer audacity of trying to bring such an epic downer to the stage.  And so its fate, it seemed, was sealed.

But a funny thing happened.  The people came anyway.  The very people that the show was about - common, everyday folk, not the upper echelons of theatre snobbery.  It seemed that, in fact, misery loves company, and a love story, and a rallying around a cause, and the triumph of moral right over legal right.  And so, after the Barbican, the West End, two runs on Broadway, several national and international tours, and a rumored translation into Martian, we have arrived 25 years later at an anniversary that has to date never been equalled in terms of presentation. 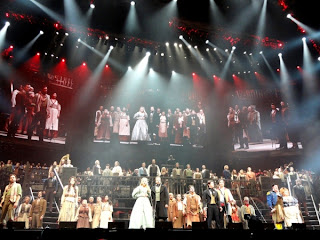 First, the enormous The O2 Arena is the venue, and the show was filmed over the course of a two performance sold-out run.  Although the exact number of seats for this specific event was not available (rumored to be over 18,000 per show), depending upon the event, 23,000 people at a time can attend.  The stage is enormous, large enough to fully seat a several hundred member choir, a full symphony orchestra, and a setting and stage that can fit a hundred member cast.  There are 3 giant screens that project images, film footage and live camera shots of the soloists, and a dozen or more light bridges on the stage alone that move and tilt, forming "the barricade."  (There is extensive lighting on the seating areas as well.)

Second, the company itself features over 550 actors, singers and musicians.  And it doesn't end there.  In perhaps the most epic of curtain calls ever, members of the original 1985 London cast, the current company of the original production, which is still running in the West End, AND a 2010 new production company, all take the stage to sing several numbers, including "Bring Him Home," "One Day More," and with hundreds of school children who have performed the school version of the show, "Do You Hear the People Sing?"  It is, in and of itself, a grand and glorious production.  And that is just the curtain call. 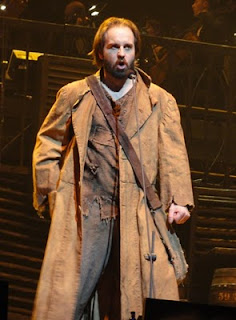 The performance itself features thoroughly talented performers, probably the best they could get across the board.  Everyone, of course has their preferences (I don't care at all for Colm Wilkinson as Valjean, and I adore Merwin Foard as Javert, for example.) but I think it would be hard to quibble about the level of talent here.  Alfie Boe (Jean Valjean) delivers a tour de force performance, nicely balancing an operatic quality with a more down to earth delivery.  His wide eyed facial expressions offer a larger than normal take on the emotions of the character, but considering what he has to perform in front of it is easy to get used to and look past.  He gets a mid show ovation for "Bring Him Home," and he looks visibly shaken by the response.  I love live performance for this very reason.  Norm Lewis (Javert) was in sturdy control of his instrument here and delivers a sharp, tough as nails performance as the unbending inspector.  Only because of the concert staging itself, did his big number, "Stars" suffer in any way.  If you weren't familiar with the actual show, you probably had no idea he was committing suicide.  On the other hand, the concert staging forces the Thenardiers to do much less over playing and mugging, which has become the unfortunate norm in recent years.  Instead, Jenny Galloway and Matt Lucas really focused on the characters, providing laughs for sure, but also some serious chills when they become most evil. 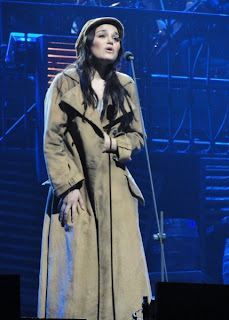 I have always had an issue with the character Cosette, who is just too damned good, and beyond Judy Kuhn, usually a shrill, hard to understand soprano.  But I can say I found Katie Hall to be far beyond my expectations.  A decent actress, she sang so that every word was as clear as a bell.  No, I don't now love the character, but I did enjoy the actress.  The much more sympathetic (and with the best female material to work with) role of Eponine is played very very well by Samantha Barks, though I have heard several actresses do "On My Own" as good or better.  The role of Marius, again a sympathetic character with some of the best material to work with, may be to many of you the weak link of this production, as played by Nick Jonas.  True, his voice is not the bombastic opera-meets-Broadway belt that every single other singer/actor (even the fop and the workhouse boss) brought to the show.  And because of that he sticks out from the rest.  Perhaps some vocal variation in the supporting roles would have added to the whole evening, actually.  Still, I found Jonas' portrayal to be one of the best acted, if not best sung.  Marius is young, naive, impressionable, passionate and a mess of hormones in love.  And Nick Jonas gives us every bit of that and more.

By far, though, my two favorite performances of the show were by Ramin Karimloo and Lea Salonga.  I have loved "I Dreamed a Dream" since the first time I heard Patti LuPone belt it on the Original London Cast Recording, and it still my go-to song wen I sing in the shower.  And I also love the story arc and character of Fantine.  I've heard many actresses do this role, including Alice Ripley and the US original Randy Graff, and I think Ms. Salonga is my second favorite ever, behind Ms. LuPone.  And, even having seen the original Broadway cast with Tony winner Michael Maguire, I have never been able to figure out why student leader Enjolras was such a big deal.  Well that ended the second Karimloo took the stage.  Sure it helps that he is devestatingly handsome, but his passion and fire in the role really brought it to life for me in a way that no other performer has been able to for me. 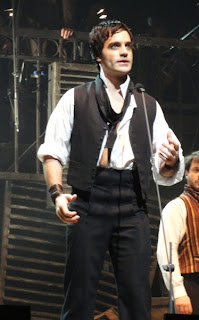 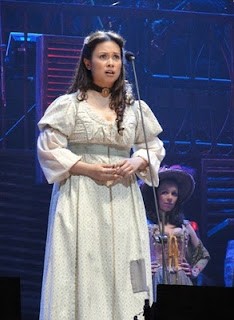 When you take into consideration that the screens projected titles and film clips (Valjean stopping the runaway cart, for example) and the use of full costumes, it is amazing how very little I missed the "iconic staging" of the original production.  In fact, there were several times that I appreciated the pauses and the on and off stage movement more than the constant circling of the turn table.  Only a few times did the "concert staging" seem to get in the way, like every time two characters were singing dialogue to one another, standing right next to each other and emoting their asses off, but NEVER looking at each other.  It was off-putting to say the least.  Only occasionally did they touch each other or even seem to act like anyone was onstage but themselves.  Apparently, Nick Jonas didn't get that note, God bless him... he took every opportunity to look at Cosette and Eponine directly!  And it worked.  How else do you portray head over heels love?

The DVD comes with a special "Whiz Through Les Miz" bonus feature which is fun and theatrical, and the show is also subtitled in several languages. 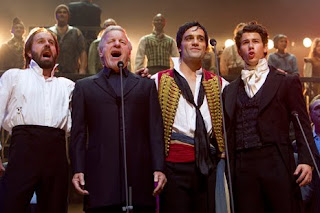 Alfie Boe, Colm Wilkinson, Ramin Karimloo and Nick Jonas
The Finale
Although Les Miserables is a show I've seen numerous times - I went through the same infatuation period everyone else did - history has shown me that it is not one of my favorite musicals of all time.  I can appreciate it for what it is, and nothing beats the cast recording when you are in a certain mood.  This DVD and performance reminded me of my initial love and exuberance for the piece - this cast's passion reminds me of when it was new back in the 80's.  And I am glad I have it in my collection.  But my overall opinion of the show is the same: respect and admiration.


(Talk about good timing!  This very performance was broadcast on PBS on Sunday, March 6th!)