With the Titanic an obvious exception, back in the day, travel on an ocean liner was glamour, sophistication and upper class fun personified.  Even today, there is a certain glamour to taking a cruise, even if today's images are highly sexualized, adventure-driven and inclusive of children.

But, back in the 30's, 40's and 50's, especially, the rich and famous, the upper crust, the entertainers and gangsters, the businessmen and the tycoons all took long cruises to get away and to be seen.  And that is the conceit of Cole Porter's Anything Goes, which debuted as a contemporary piece in the 30's, and enjoyed nostalgic and highly successful revivals in the 60's (off-Broadway) and the 80's (on Broadway).  And, starting just yesterday, a new revival for the new millennium began previews at the Stephen Sondheim Theatre. 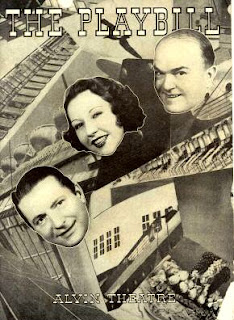 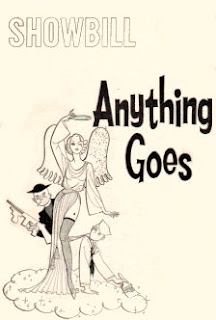 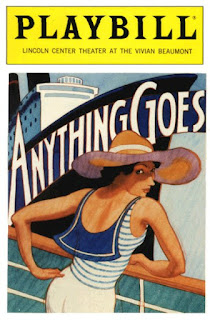 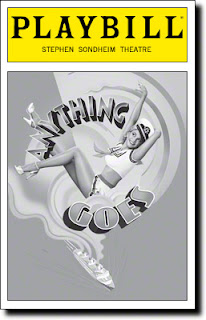 Anything Goes through the years
Let's see what the Roundabout Theatre Company has come up with for their advertising and logo! 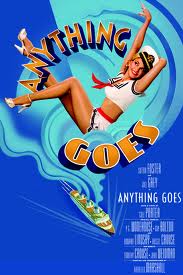 TOP: The central ad image
BOTTOM: The logo with billing
Well, the first thing you notice is that a woman (photographed, not an art icon) is the centerpiece of the ad.  We know this is Sutton Foster, and she is certainly a draw for Broadway fans.  But beyond Broadway, who knows who she is really?  I suspect that that is why, except for the billing posters outside theatre and some Times Square ads where her name is more recognizable to passersby, you don't see many things touting that Sutton Foster is in the show - her (and Joel Grey's) name really works only where people who know Broadway will see it and it means something.  It is wise of the Roundabout to limit name recognition so as to appeal to a broader, older, touristy crowd.  After all, if this show has the legs it is rumored to have, it will play longer than the limited run it is currently scheduled to have, and will play long past Foster and Grey's contracts.  (Roundabout may be thinking Cabaret not Bye Bye Birdie this time.  I think they've learned from The Pajama Game as well.)

But the image... 30's style sass and glamour.  The gal's got legs for miles, a winsome, slightly naughty smile of full red lips, and her high heels and "sailor suit" fairly screams, "I'm entertaining!"  What more could you ask for from a single image for an old-fashioned musical?  And they way they use her image is smart, too.  Don't you love how she rides the waves of steam miles above the ocean liner, carefree and oblivious to any danger?  Or how they have her draped over key words in a signature song from the show, "It's De-Lovely"?  It is smart and vibrant and yet still old-fashioned in the best way. 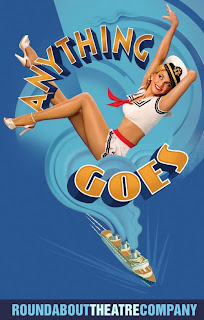 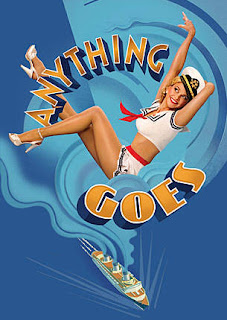 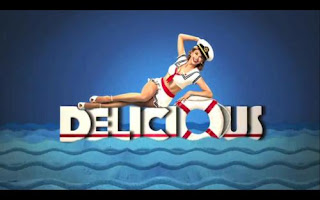 The choice of blues and blue-greens obviously call to mind the water, and the pattern in which they are laid out is art deco all the way, as is the wavy tumble of the title words.  They are in a period typeset with recalls both the art deco era and the nautical.  In short, we have a logo that sets the scene.  And the images transport us back to a time ago, when things were less complicated, fun, and risque without being dirty.  If that's not Anything Goes, I don't know what is!

In the months leading up to the first preview last month, the Roundabout sent out "e-postcards" featuring various holiday-themed sayings from Sutton Foster as Reno Sweeney.  They are clever, not pushy, and help keep the show in mind.  They also do something very important.  They get us to thinking about Ms. Foster as someone other than Millie, Fiona or Jo.  She is really taking on an adult role here, one generally associated with slightly older dames.  The pictures at least show us that Foster can work as a sassy dame on the high seas.  How she does live in performance remains to be seen, but I am confident. 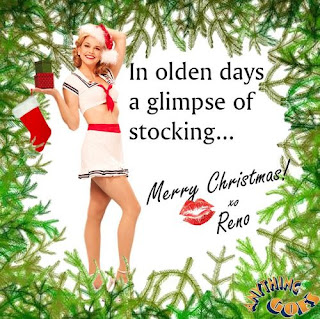 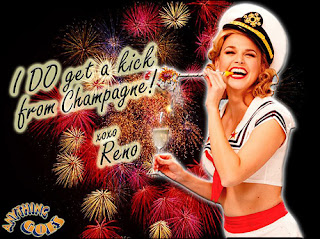 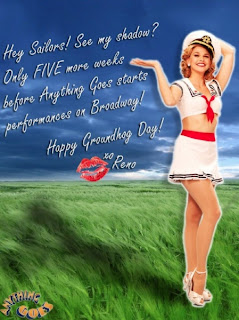 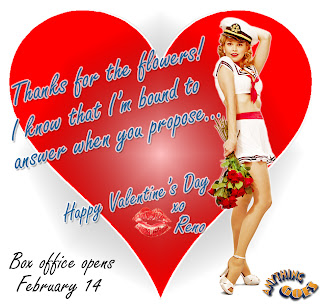 I hope the show is as much a winner as the artwork and advertising!