My friend Mike and I usually disagree on small things or a specific performance when we see a show.  It is rare at we completely agree.  And every once in awhile, we completely disagree.  Passing Strange is one of those instances.  I saw the show on Broadway, and found it to be self-important, smug, ego-driven, and most of all dull.  Oh, and as pretentious as referring to yourself in the third person or by name as Stew does, or referring to your movie as a "Joint" like Spike Lee does.

Mike and I did not see this show together, and so it seemed completely out of the blue when he emailed to say he watched the movie version and was quite fond of it.  And so I asked him to write a review of the show/DVD, knowing that I would not be wasting another 135 minutes of my life on Stew and his crew, but realizing maybe some of you might be interested.  And so, here is my best buddy's guest blog.  Enjoy! 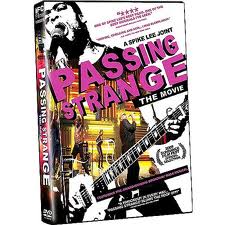 Have you ever seen a show and thought, "wow, that was a clever concept! I wonder how they managed to screw it up?" I sure have. Well, Passing Strange is just the opposite: the story is pretty lackluster, but the execution is so sincere and compelling that I found this video version of the 2008 Stew musical to be quite satisfying.

About that story... let's just say that it traces the artistic (or maybe pseudo-artistic) journey of the kind of self-absorbed young man that, well, only a mother could love. In pursuit of musical inspiration, a callow Youth (Daniel Breaker as a younger version of Stew himself) travels from Los Angeles to Amsterdam to Berlin, alienating everyone who cares about him along the way, without ever really discovering what it means to be a real artist, or indeed what it means to be real at all. I can't blame audience members who wondered "what's the point?" and maybe even "who the hell is this Stew guy to think that he deserves to be telling this story on Broadway?"

The show is basically a satire, but the targets of the satire - the foibles of a middle-class African American upbringing in 1970s Los Angeles, the casual sex and innocent debauchery of Amsterdam, the post-modern anger and emptiness of Berlin - don't have much resonance, unless you've led a life pretty much like Stew's. Only towards the end of the show do things converge in the direction of a more universal theme, but even then, the lessons are not terribly original (if you've seen Home Alone, then you've already learned them).

What, then, is the appeal of this show and this video? Well, if you're traveling with the right people, a road trip can be fun even if the scenery is blah and the destination is meh; in much the same way, the people who tell this story and the music that is used to tell it make Passing Strange worth the time. The cast is superb: Breaker as our (anti?) hero; Eisa Davis as his very sympathetic and long-suffering mother; and a quartet of young actors who play the Youth's friends and compatriots at various stages of his journey: Rebecca Naomi Jones (terrific also in American Idiot), Colman Domingo (even more terrific in The Scottsboro Boys), De'Adre Aziza (Women on the Verge of a Nervous Breakdown), and Chad Goodridge. All give fascinating performances, and all work very hard (most of them end up soaked in sweat by the time the show is over).

And then there's Stew, who is the creator of the show, its central performer, and its soul. I found him very likable and enjoyed his casual sense of humor, and I very much enjoy his singing voice, which can be both strident and soothing. Even though the Tony he won was (inexplicably) for Best Book, it's really the score that makes this show work. There are some beautiful, heart-tugging ballads ("Keys," "Come Down Now") and some energetic rock songs ("We Might Play All Night," "Passing Phase"). There's also some trippy chromaticism to accompany various drug binges and some vivid passages that do a much better job than the dialogue in establishing the atmosphere of cities like Amsterdam and Berlin.

Even though the story of Passing Strange leaves a lot to be desired, the script does have a few high points. There's lots of humor, much of it quite funny, and some of it deeply rooted in the dramatic situation, as when Stew deadpans that "no one in this play has ever had to hustle for dimes in South Central." (See? You had to be there.) And while many of the show's attempts at "deep thinking" miss the mark, a few of them are genuinely though-provoking, as when Stew suggests to his younger self that the concrete realities he's looking for may only exist in art. 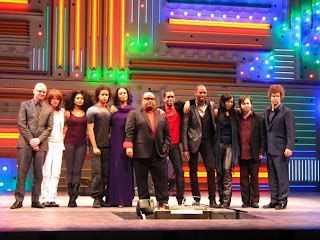 As for the design elements, there's nothing too flashy, except for the many neon lights at the back of the stage. These are by Kevin Adams, and while they do a serviceable job evoking the various dives that constitute most of the show's settings, they pale in comparison to the work he had done in Spring Awakening and would soon do in Next To Normal. The scenic design is sparse - basically a few chairs - and works well enough. The costume design, on the other hand, is extremely effective, and absolutely crucial in differentiating the roles of the "quartet" of friends as the Youth makes his way from California to Germany. It's the costumes that also establish, from the start of the show, the connection between our narrator Stew and the impetuous Youth.

I was actually invited to review the DVD of Passing Strange, but I see that I've used up almost all of my space discussing the show itself. If I can't be verbose, then let me be clear: this is, hands-down, the best video recording I've seen of a stage show. Some of that, I'm sure, is due to budget: Spike Lee has a dozen or more cameras all over the theater, something clearly beyond the means of PBS or Lincoln Center. But it's clearly also a matter of talent and artistry: from moment to moment, the director has carefully chosen each shot and each angle so that we see precisely what we're supposed to see. He also shows admirable restraint, letting the performances speak for themselves. The few cinematic tricks that he does employ - a sort of fuzziness when drugs are being used, as well as a "home movie" effect when one character is shown filming another - are appropriate and unobtrusive. If I have one qualm, it's that the shots that show the audience detract a little from the viewing experience, but I suppose that's a byproduct of his laudable commitment to filming a live performance of the show.

In short, if you missed Passing Strange on Broadway and have any curiosity at all about the show, do not hesitate to buy or rent this DVD. That is all.