I'm not Catholic, but I had decided that after last week's last posting about Spider-Man: Turn Off the Dark, that I was giving up blogs on the subject for Lent.  Or until the "new version" started previews.  But not one but TWO headlines today got my Spidey Sense all a-tingle.  One made me laugh, and another was a bit more serious.


The more serious one was the news that TV Carpio was injured on March 16th during her "battle" scene with Spider-Man/Peter Parker.  I was immediately relieved to find out that her injuries were minor (despite an AP headline that reads, "Another Injury ROCKS 'Spider-Man' Broadway Musical" - caps mine - talk about over kill...the news guy in the show would be thrilled) and that she's only be sidelined for about 2 weeks.  Depending upon who you read as more information was revealed, she either hurt her neck, her head or her back.  The official notice says she has "whiplash."  One thing that must disappoint the anti-Arachne crowd is that not one article I read even hinted that the rigging was unsafe or that safety procedures were not in place or not followed.  In other words, she suffered a performance injury akin to a dancer popping a knee or twisting an ankle during a rigorous routine.  Having seen the stunt in question, I can say that I'm not surprised to hear that the flying part is not to blame, considering that at that point she moves slower than the Phantom's chandelier.  The hand-to-hand combat aspect of the stunt, however, is right up there in terms of difficulty and potential injury.  It reminds me a lot of the "slow motion" barricade sequences in Les Miserables, that end with actors dangling by their ankles as the set spins around after they gun fight and got fist to fist with other actors.  (Actors got injured doing those stunts, too.)

Then I got to thinking... hmmm... Arachne's role is reportedly being "re-thought" by the new creative team... the show will shut down shortly for "repairs", in roughly 2-3 weeks... Is TV Carpio getting an "easy" "graceful" way out?  Well, depending upon who you read, again, Ms. Carpio has been somewhat public in her desire to return to the role quickly, and can't wait to work on the show.  I sincerely hope that is the case, because she really really makes a difference and is quite a talent.  I wish I could be as favorable about her understudy America Olivo, who I am sure is a wonderful person, but not a great Arachne.  Sad, but true, my next thoughts were, "the understudy will kill the role once the creatives see how ill-suited she is."  Even sadder?  A quick review of the inevitable message board thread on BroadwayWorld.com has other "fans" speculating just as I was.  Talk about a bitter pill to swallow! 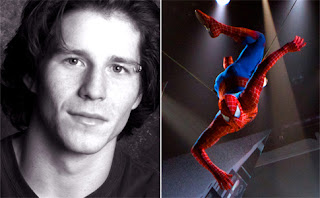 The second Spider-Man article, that made me laugh, literally out loud, came as I went to The New York Times to see what those vultures reporters had to say about Ms. Carpio.  At the time, there was not a single word about it, can you believe it?  Instead there was this little gem about the recovery of Christopher Tierney.  How cloak and dagger meets Frankenstein!  A clandestine, out of state DNA test?  Finding ways to heal even faster with a study of the results?  Science fiction, I tell you!  LOL!  But seriously, if this kind of thing is done to help athletes and stunt men heal faster, why not the athletes and stunt men that regularly perform on the Great White Way?  And writer Kate Taylor got it right on the button when she suggested that Dr. Osborne (pre Green Goblin) would so approve of this!  See?  There is something to be gotten from Turn Off the Dark!  After I laughed and thought about it some, it sure sounds pretty cool if not just a tad Incredible Hulk-ish.  Can a musical about him be far off?

I now return you to the regularly scheduled 2010-2011 Broadway season.  Up next: Sister Act, BROADWAY BARES, and Baby It's You!