Whether anyone wants to admit it or not, a show that has the word "kinky" in the title faces a sort of damned if you do/damned if you don't dilemma.  I mean I know (and probably most of you who read this blog and others like it) that Kinky Boots is based on an independent but still mainstream film.  But there is a pretty decent chance that the long term audience for the show may not know and make certain assumptions.  Patrons going to the Al Hirschfeld Theatre for something along the lines of Fifty Shades of Grey will be sorely disappointed.  Here, "kinky" is much more benign; these are boots with flash, flair and suggestive naughtiness, not tools in a dominatrix's bag of tricks.

So, I have to assume that producers went to the ad agency and asked for some kinky "flavor" rather than something overtly sexual, and, of course, something that is in keeping with the actual story, NOT any assumptions.  And they got what they asked for.  Maybe even a little too safe. 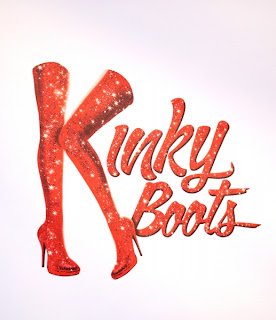 Bright red and sparkly letters against a plain white background is obviously (in a good way) eye-catching.  And the over sized "K" made of kinky boots is equally eye-catching and obvious (in a safe way) way to get the expectations where they need to be - not a whip or set of cuffs in sight.  Middle-America will get it instantly.  It is difficult to imagine a more true to the show and still kind of dull logo.  It is serviceable. 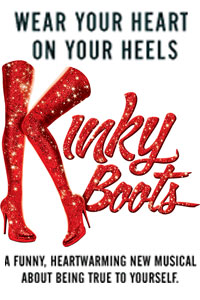 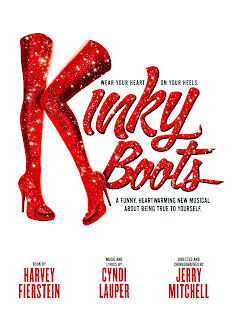 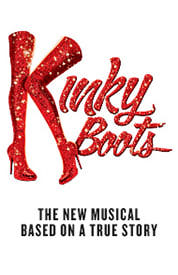 What I find more interesting is the ever-changing tag line situation.  Clearly, they aren't sure what they want.  In logo one, the logo gets almost lost in all the words.  The top line is clever and catchy (picture it on the back of the show shirt).  But that last line almost begs you to be defiant and say, "it wasn't that funny or that heartwarming," even if it really is.  And isn't the fact that something called "Kinky Boots" is also a true story interesting enough?  Logo two has all the same words, only smaller, which doesn't really chance anything.  But it does add, for theatre fans at least, the real stars of the show - Harvey Fierstein, Cyndi Lauper and Jerry Mitchell.  Alas, they are not a team in the way that Rodgers + Hammerstein are, and so they are not easily integrated into a logo.  Number two is more a show poster than logo.  Finally, logo three de-clutters, but keeps the wrong information.

What would I do?  In this case, I'd keep a "New Musical" in there somewhere for people who don't know the title, and those who do will know this isn't the movie plopped on the stage.  And I'd definitely keep the "Wear Your Heart on Your Heels" line.  It is clever and thematic and as fun as the show should be.