Well, it was bound to happen.  Everything I generally dislike about solo cabaret acts put on by Broadway stars came together in this latest in the 54 Below series by Broadway Records.  What surprises me is that it was the efforts of Christiane Noll that provided this largely dismal listening experience.  I loved her in Chaplin and I think she has a lovely voice.  How disappointing that without a script and some direction she becomes my worst nightmare - the adult version of the pretentious thea-TAH geek that got the rest of us shoved into lockers in high school - a self-indulgent, scarf-wearing ACTRESS (check out the pictures of her in the CD booklet). 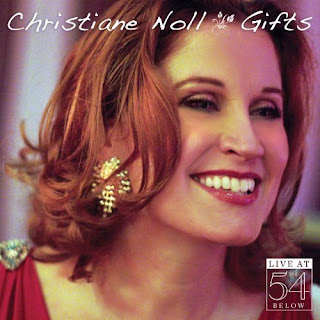 The Gifts of Gifts

There a few things in favor of this CD.  First, per usual for Broadway Records, the quality of the sound and packaging are first-rate.  The sound is full and well-balanced - rarely does it sound like a live recording.  Second, the piano accompaniment by Ross Patterson is excellent in every number.  You almost forget there are no other instruments.  Third, given that the song list is almost exclusively "Broadway," it is nice that Ms. Noll balances the expected (songs from Ragtime and Jekyll and Hyde) with a few classics (Annie's "Hard Knock Life," "What I Did For Love" from A Chorus Line, "Some Enchanted Evening" from South Pacific) and a generous handful of show tunes that deserve to be heard more (Baby's "I Want It All," Once on This Island's "Waiting for Life" and Barnum's "Museum Song").

And there are a few times during the set where Ms. Noll just sings.  No patter, no forced melodrama, just her beautiful soprano singing a song - "Waiting for Life" and "Back to Before" stand out to me even now.  And there is one part of her patter that is interesting, engaging and mostly sincere - memories of her father bringing home every "soundtrack, uh, cast recording" ever made, thus explaining her love for show tunes.  All are hints at what could have been. 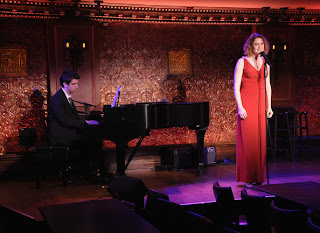 Does Gifts Come with a Gift Return Receipt?

Alas, great packaging and sound quality do not necessarily make a hit.  (If it were, Chaplin would still be open.)  Now, to be fair, I did not attend this performance and have only my ears to rely on.  But I have spent the majority of my life around theatre people, and can generally sense some things about the truly gifted.  They fall into two categories: (1) confident no matter the circumstance, and (2) insecure over-compensators. LuPone, Osnes, Peters, group 1; Butz, Noll, group 2.

I have no doubt that her stories are for real - her childhood in a musical family of three, and her life-changing husband and child, for example.  But when she talks, it almost always feels like she is ACTING instead of letting us see any of the "real Christiane Noll."  When she reveals an all-too inevitable mother-daughter rivalry, instead of being down to earth, she delivers the tale like a monologue from Medea.  She gets all the way to the end of a great story about singing "The Sound of Music" at an audition for Julie Andrews.  Then she ends it with a punchline masquerading as insight.  Looking back on it, it has the feel of a sleazy "three priests walked into strip club" joke.  They say the proof is in the details, and there are plenty in each story, but she delivers them in a telling oversell that makes nearly every story ring insincere.

Why does she do this?  People would (and have) pay just to hear her sing and interpret the American musical songbook.  She has a lovely instrument.  But the often harsh oversell of her set exposes, possibly, her fatal flaw: she comes across like either she has no confidence in the material or she lacks confidence in herself.  It is not at all that uncommon among the truly talented to feel that they are somehow lacking.  But these are the same people that make the general population cringe when they hear the term "stage actress."  Almost the entire CD smacks of Ms. Noll being "on."  And she sure SELLS it, meaning she yells, screeches and emotes to the rafters.  She does it with telling ease.  One has to wonder if, in fact, every time she is one of those performers who is always "on"?

She starts the show with a wistful "Somewhere Out There."  Is the real Christiane Noll out there somewhere?