LOGOS: Hands on a Hardbody

Who'd have thought that a show logo that features a red pickup truck would be so closely associated with one of the greatest American musicals?  Not that it doesn't make sense, literally.  After all,  Hands on a Hardbody is about hopeful contestants vying for an all-American prize, just as A Chorus Line is about hopeful dancers vying for an American musical prize.  Both shows take us through the contest - the emotional and physical ups and downs - by way of meeting and getting to know each of the contestants.

The logo definitely pays homage to the classic. Notice each of Hardbody's 10 characters in silhouetted poses with the titular truck, just like the dancers on the titular line. 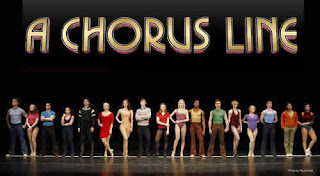 Of course, the newer show is, let's say, more rugged.  And as the tag line reads "Made in America."  So what says "American" and "rugged" like a background covered with tire treads and a central star shape that looks like riveted metal.  And that same star is both patriotic AND symbolic of the show's locale, Texas.  With a bright yellow/burning orange prevailing color, the overall image is both eye-catching (a must in busy Times Square) and reminiscent of the hot, scorching sun the contestants must endure to win the prize. 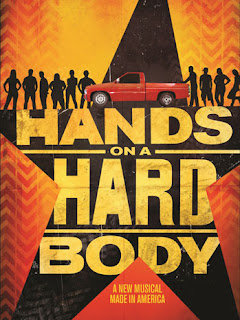 The lettering of the title, all straight lines and chunky, are very masculine and rough edged, and look kind of home made, rather than precise and fancy.  And the tag lines - "A New Musical" and even more importantly, "Made In America" - are done in the stamp style of products marked "made in America."


In short, the logo does everything a logo should do: it tells the story, it explains the title, visually depicts the central themes and emotions, and it is eye-catching and visually interesting without being so crowded or vague so as to confuse.  It should make you pause and look closer.  Let's hope it translates into ticket sales.

Before you go, be sure to check out this week's "Face of the Future," Jon Rua!  HERE