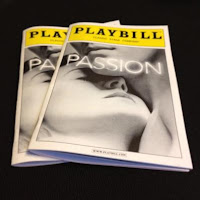 When Passion opened on Broadway in 1994, it left audiences divided at best, downright angry and confused at worst.   Certainly, the music - the complicated motifs, the character-driven sounds - and the lyrics - spare and poetic - were lovely from the get go, if not a tad solemn. But, of course, there are the main characters - a wooden soldier, a philandering, unhappy housewife, and a sickly spinster with obsession issues.  Hardly the stuff of a musical theatre romp, right?  Sondheim fans knew there was something special there, and, as with most of his works, they felt it maybe was troubling because it was just ahead of its time.  Well, nearly twenty years later, it looks like the Sondheim-ites may have been right.  Time has been kind to this show; the theatre-going public has certainly warmed to the score.  And this current, nearly perfect revival presented by Classic Stage Company and directed by John Doyle proves that there is, in fact, something special there.  Don't get me wrong.  What was once perplexing remains perplexing.  But instead of leaving audiences frustrated, they are leaving beguiled.

Doyle, a true Sondheim master interpreter, has lent his less-is-more approach to the piece, his spare design bringing the characters in this character-driven piece to the fore.  A few chairs, a cracked marble floor and the occasional prop are all he gives us to define what is happening and where we are.  The moody, alternately sharp and diffuse lighting brilliantly designed by Jane Cox suggests time, place and feeling, while the single costumes per actor beautifully designed by Ann Hould-Ward wordlessly define who these people are.  Genius Sondheim orchestrator Jonathan Tunick has created a miraculous, lush sound for a very few instruments, under the masterful baton of Rob Berman. But all of this artistry is really a frame for the art that floats ethereally in front of you for the duration of the performance. 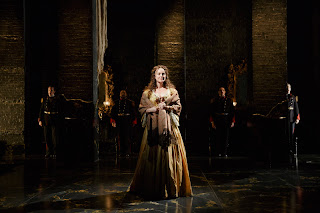 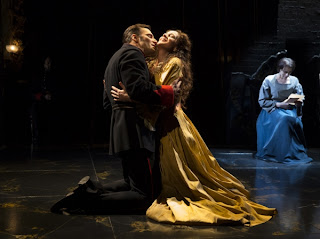 As spare as this production is physically, the staging is really austere art in motion.  Doyle has his cast alternately in a constant fluidity or in rigid formation.  The soldiers are stiff, never quite looking at each other as they march past and between each other; their unison suggesting a militarism so ingrained as to be done without thought. Even as they share a dinner table, they never really see each other as they trade the same banal conversations over and over.  The only time they really come to life is when they are gossiping, and even then it is with the feel of fake interest or simply as a relief from the haze of their lives.  They circle the central characters like birds of prey.  And they are often facing away from the audience, forcing us to listen more closely to share in their collective boredom.  The result is as intriguing as it is unsettling.  They are quite good as a unit - excellent singers all.  When they are called upon to portray more developed characters they slip in and out effortlessly and with a sharp clarity.  Standouts include Will Reynolds as Count Ludovic and Jeffry Denman and Ken Krugman as Fosca's parents.  In more central roles, Stephen Bogardus impresses with a difficult, possibly one-dimensional leader role, and Tom Nelis imbues the doctor with a thought-provoking mix of the cold calculation of a master manipulator and the warmth of a seasoned caregiver. 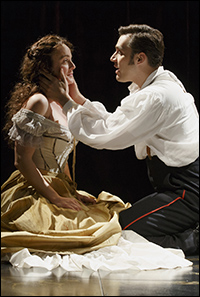 By necessity, though, the success of any and every production of this difficult piece hinges on the casting of the three main roles.  And this production has had three lightning strikes.  All three are brilliant interpreters of the complicated score, as one should expect.  But the entire production thrives in a way that the original did not due entirely to the thoughtful collaboration between text, director and actors.  It is telling that while this Clara (Melissa Errico) is the more traditional beauty and she has a flowing golden gown, it is muted, not dazzling; her long locks are slightly a mess, her face is lovely, but largely unmade up.  Equally telling is that this Fosca (Judy Kuhn) is plain - almost painfully so - but not entirely ugly, either.  When she allows a brief smile, her eyes wrinkle in delight and her brief happiness lights the room.  Despite an ill-fitting and Puritanical plainness, her dress and blouse still manage to evoke a subtle sense of femininity.  Great care has been taken to add dimension to these women: you can tell Clara is torn - tormented, even - that her sense of duty to her family must keep her from what truly makes her thrive; Fosca has been given a sense of humor, making it all the more believable that she knows what she is doing as her obsession takes over and is really helpless to fight it.  Her apologies now seem genuine - the beast has some beauty in her, and it is so welcome.  Here, both ladies are more accessible, making for a much more interesting and relatable evening.  Both Ms. Errico and Ms. Kuhn have years of experience and an unspoken clout; their mastery of these difficult roles isn't terribly surprising, but it sure is gratifying to witness. 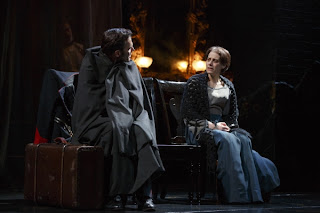 The real delight here is the relatively unknown Ryan Silverman, formerly of The Phantom of the Opera and nearly the lead in Rebecca - aren't we now glad that didn't happen, and now hope it does?  His Giorgio is a heady mix of genuine masculinity and self-assurance covering a mess of a man conflicted by a love he thinks he understands and another love he is woefully unprepared for.  We see him struggle to do what is right and/or follow his heart.  We witness the transition from a physical, sexual love to a complex, emotionally profound love.  This Giorgio makes mistakes, bad choices and a valiant effort to make everyone happy.  This inner conflict is as much a part of his near destruction as is his poor judgment or inability get untangled from his circumstances.  This Giorgio is a manly soldier to be sure, but he is hardly wooden.  Instead, he is sexy, but in an everyman way, charming, but in a sincere and honest way, and he is flawed, but in a work in progress kind of way.  Silverman's voice and presence are warm and inviting.  At last, Passion fans have a leading man to root for - actually, all three of these leads allow their audience an accessibility that makes this production revelatory.  If you think you knew Passion before, give this production a visit.  You will leave all the richer for the experience.

To quote another Sondheim show, "Art isn't easy."  And it shouldn't be.  This particular work will always leave many questions unanswered.  But at least this production makes you want to answer them or at least think about them instead of wanting to run screaming in frustration.