RE-REVIEW: The Mystery of Edwin Drood

You never know what you are going to get when you see a show close to the end of its run.  Sometimes, it is a mere shadow of its earlier self - maybe the replacements aren't so great.  Other times, it has been around so long and has gone unchecked, making it an unwieldy mess - a parody of itself.  But in the case of the soon-to-close revival of The Mystery of Edwin Drood, it is as together, exciting and excellently performed as it was when it first opened.  And, considering that at this performance there were two major cast replacements and four understudies on in principal roles, that is amazing in and of itself.  It speaks volumes for the company and its depth of talent.

It was all hands on deck to fill in all of the roles, including both swings, Jennifer Foote and Justin Greer.  You'd think that maybe the big company numbers would look skimpy, but that was definitely not the case.  The dancing, in fact, seemed even more sharp and spectacular than it did on my first visit.  And the entire ensemble got the whole place - it looked full to me - really pumped up before the orchestra struck the first note!  In short, despite being down a few members, the ensemble brought an intense and special energy to the show that night. 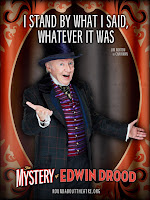 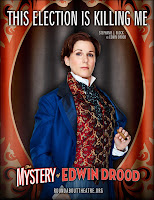 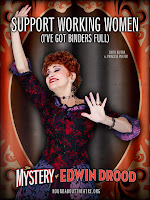 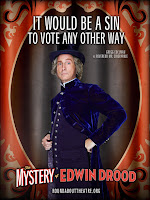 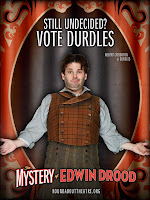 Indeed, even the regulars who were in the show had a particular edge that night.  Gregg Edelman seemed to take his role of Crisparkle to new zany (and creepy) heights; the audience ate him up, and he responded in in kind.  Robert Creighton's Durdles/Nick Cricker remains delightful - charming, sweet and delightfully vulgar. (His lover's duet with Ms. Rivera was sooo icky, and sooo funny.)  As Drood, Stephanie J. Block was on fire!  Her energy, enthusiasm and swagger elevated every scene she was in, and she nailed that last note in "The Writing On the Wall" with effortless power.  And the great Chita Rivera was just that - great.  She looks like she is having the time of her life, and really plays directly to the audience very well.  She is a treasure.  Finally, in the most challenging role of Chairman, Jim Norton  is a sublime mix of downplaying, overplaying, wit, charm, sophistication and bawdy.  He is the glue that holds the whole thing together, and yet he makes it look like it is no big deal, just a man doing his job.  But you can tell by the sparkle in his eye and the little gestures he has with each company member, that he is enjoying every single second on the stage. 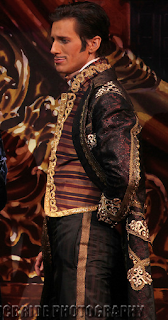 The two high profile additions to the cast, replacements Andrew Samonsky and Erin Davie, fit their roles and fit into the company without a hitch.  Neither plays their role like their predecessor, but the show does not suffer for it.  Samonsky's rakish Neville Landless is a riot of big toothsome smiles and over-the-top bravado.  He nails every laugh - maybe even more than Andy Karl.  But it is his melodramatic intensity that is both hilarious and edgy.  His heightened menace brings some palpable tension whenever he and Drood are in the same place.  Ms. Davie's Rosa Bud is a silly, coy and charming little girl getting used to a woman's body, and as Dierdre Perrigrine she's a scream - a sexy flirt with a little something for everyone.  She is one of those actresses you find yourself watching even when she's not the focus of the scene; watching her face as she goes back and forth between characters is a real delight  She has a lovely voice and manages to be both the serious ingenue and hilariously funny at the same time.  It is no wonder she was selected as murderer that night - and she tore that confession up!

So how were all of those understudies?  Across the board, they were excellent.  No one in the audience lost anything because they were on.  It was especially nice to see Kyle Coffman come to the front as the Deputy.  He actually talks! The young actor played off Mr. Creighton with comfortable ease.  And he's quite funny and athletic in the role - his dancing remains impeccable.  Nick Corley was a sweet delight as Bazzard, singing "Never the Luck" with delight and just a knowing dash of irony.  He was a crowd-pleaser to be sure.  The Helena Landless of Alison Cimmet was sturdy, vicious, and very funny.  She worked well with both Samonsky and Davie, and was a terrific Dick Datchery! 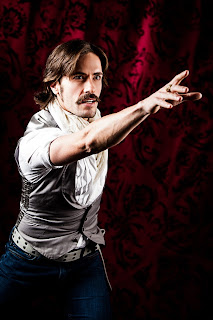 But the delight of the evening was Eric Sciotto's amazing turn as John Jasper.  On in the role for the first time - you'd never know it - he made the role his own.  This was no carbon copy of Will Chase to be sure.  Sciotto (a smaller to average man in stature) was larger than life as he navigated the tricky line of melodrama, never teetering over into excess, but still attacking every nuance of the role with appropriately broad strokes.  "There are two men in me" takes on new meaning in his capable hands - the nice choirmaster becoming less and less evident as the lustful, vengeful man on an evil mission takes over more and more.  What was particularly engrossing about his performance was that he was quite funny, but also quite menacing, and even a little scary.  A terrific touch to his performance was an hilarious homage to the Jekyll and Hyde hair flip.  He also has a terrific and powerful voice, especially in "A Man Could Go Quite Mad" and "Jasper's Confession."  As I said, you'd never know he hadn't done the part before, let alone with just a couple of hours notice. He looked like he was having the best time doing it, and the audience really seemed to love his efforts.  Bravo! (Click HERE to read Eric's philosophy on understudying, and be sure to read his 4 part interview as well!)

Drood is in excellent shape and as fun as ever.  Get to one of its final performances if you've still not seen this - you won't regret it!