REVIEW: A Night with Janis Joplin

Bio-musicals/rock star recreations are not my favorite musical sub-genre.  And I am not a big fan of 60's rock (particularly the kind played predominantly at Woodstock).  Janis Joplin, especially, always kind of annoyed me - screaming to a distorted electric guitar is what it sounded like to me - to the point that whenever anything to do with Woodstock ever came on TV or the radio, and it got around to her, I'd quickly change the channel.  So it may surprise you that I even went to A Night with Janis Joplin at all.  The truth is that had the powers that be not determined the show to be a Best Musical candidate, I wouldn't have gone.  So it surprises the hell out of me to say this: I am glad I went, and would definitely have felt like I missed something had I missed it.  Even more of a surprise is that of the sub-genre of bio-musicals/rock star recreations, this is one of the best.

Still, the show has its faults - all of which would apply to any musical I'd review.  Had the show ended at what was intermission, I'd have given the show a solid A.  But like many a show with very specific concept and structure, not to mention a limited song catalog, A Night with Janis Joplin outstays its welcome by about an hour.  The only highlights of Act Two - a medley by the "concept" (aka "Janis' Blues Inspirations"), "Me and Bobby McGee", and the finale-feeling "I'm Gonna Rock My Way to Heaven" - could have easily been tacked on to the first act and we'd have left thrilled and fully sated. 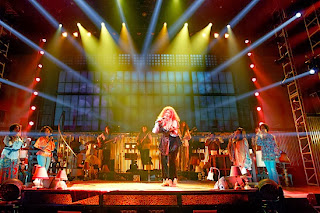 Also, the concept/structure of the show, which is really an amazing way to creatively and reasonably add to an evening that by rights should be limited to about 6 greatest hits, ends up feeling very played out - read "overdone" - way before the lengthy curtain call/encore sequence.  That concept, Janis Joplin talking us through her years growing up is trite enough, but she also discusses her influences.  Ranging from singing Broadway show tunes as she and her siblings cleaned their Texas home to blues legends including Odetta, Bessie Smith and Nina Simone, she introduces these women and they sing those songs which really influenced her blues/rock career.  Interesting and insightful to be sure.  But it gets old - especially when she teams up with "Aretha Franklin" to do one of those audience-participation call back numbers that never feels very genuine - though the slightly inebriated audience lapped it up like a last-call drink. And the between song banter (written by director Randy Johnson, rumored to be based on actual Joplin writings) seems organic enough when it all gets going, but then you start to realize that it lapses into rhyming couplets and lines set to the underscoring, making it feel less "fuckin' real, man" and as contrived as one of those cheesy tribute film shorts they play in museums.

Finally, at the risk of sounding morbid, one of the more interesting things and, arguably a big part of why she is the legend she has become - like Jimmy Dean, Marilyn Monroe and Elvis before her - is the cause of her untimely death.  Hard partying, booze and drugs killed the woman at the too young age of 27.  And, yet, short of a few applause-greeted onstage swigs of Southern Comfort, all of the ugly side of her short life goes unmentioned.  And with that omission, the show suffers from a decided lack of dramatic tension.  It's kind of like watching a bank robbery while ignoring the time bomb by the safe. 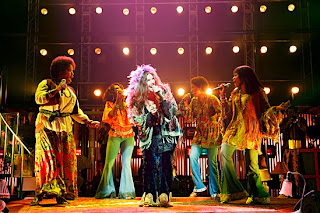 All of that said, there are many things to like (and even love) about A Night with Janis Joplin.  Chief among them is the just-right volume, which, thanks to sound designer Carl Casella, is rock 'n' roll loud, but not ear-splitting.  And there is the insightful contribution of Darrell Maloney's projections on an enormous wall of screens upstage, not to mention the Tony-worthy lighting design of Justin Townsend (he also designed the odd attic antiques/rock concert venue set), which contributes mood and visual excitement from start to finish. Those tube lights that frame the stage are fuckin' mind-blowing, man.

Performance-wise, the show is an embarrassment of riches, starting with the absolutely sensational band led by musical director/guitarist Ross Seligman.  These guys, including a swinging horn section, play with passion and style. The four back up singers, aka the Joplinaires, are superb in just those roles.  But they really excel at their roles of blues inspirations to Joplin.  Allison Blackwell's amazing deep register bellows across the Lyceum as she conjures Odetta and Nina Simone.  The bluesy swagger of the great Bessie Smith is wonderfully recreated by Taprena Michelle Augustine, while Nikki Kimbrough brings the vocal style of Etta James to realistic life.  But it is NaTasha Yvettte Williams, who brings down the house as "Blues Woman," with a stunning rendition of Porgy and Bess' "Summertime," and later as the Queen of Soul.  These four ladies more than hold their own against that tornado of energy who plays Joplin herself. 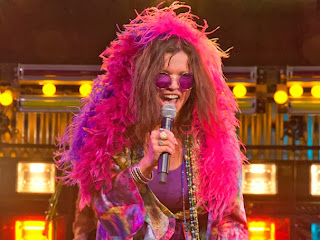 Mary Bridget Davies wisely avoids doing a photo copy of Janis Joplin, but rather does a loving recreation of the legend's mannerisms and voice.  When she sings, however, she nails the gravelly, booze-fueled sound of Joplin perfectly.  But she also brings much more to each of her numbers, a quality that today's Idols only seem able to approximate.  She (just like Joplin) can riff, scat and do amazing vocal runs, but more importantly, also like Joplin, there is an organic and profound passion behind every word she sings.  Her "Piece of My Heart, "Summertime" and "Cry Baby" are particularly effective.  Davies also possesses that illusive "it" quality that makes you look at her, even when she's not the focus of a scene.  Thankfully, those moments aren't frequent.

I'd like to think that the real Janis Joplin would have been touched by the tribute to her music.  And I'm pretty sure she'd have seem right through the rest of it.