CD Review: The Sound of Music (Music from the NBC Television Event)

There sure has been a lot said about NBC's live telecast of The Sound of Music, and when I sit down and watch the whole thing through without interruption, I'm sure I'll have a few words to share myself.  Whether you liked it or not, whether you found its star good or bad, Broadway fans should be rejoicing that this took the nation by storm - and it is important to note that the Broadway version, not the film version was presented - and, as I write this very review, NBC has announced that the search is on for its next live musical, in what will become an annual event!  For now, however, the good folks over at Sony Music/Masterworks sent me a demo copy of the CD, memorializing the score of the show.  And that is all I will be talking about today. 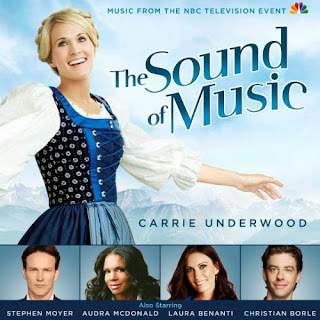 The Booklet: I'm willing to give NBC/Sony Masterworks the benefit of the doubt.  I mean this is largely uncharted territory for a half century, and it is pretty risky all by itself to release a recording of a score days before the live telecast - you are hearing studio recordings of what will be done live here.  So that excuses the lack of "show" photos.  But they could have included some rehearsal pictures and/or set/costume drawings to make the booklet more of a keepsake.  (I suspect that the next such recording will be more lavish, given the huge ratings this one got.)  Perhaps most lacking, though, is that they didn't even see fit to tell us who is singing which lyrics as part of the inclusion of the lyrics.  OK, maybe I'm being nit-picky, but still...

Stephen Moyer: Please, True Blood fans, don't write... he was somewhat better in his acting scenes in the telecast (heck, he even covered for another actor when he went up on his lines).  But in isolation on this recording, without any visual to go with the performance, I find his voice to be the thinnest of anyone on the recording.  He is not bad, just not strong.  And "Edelweiss" is pretty decent...

The Orchestra: I always love to hear a classic Broadway score like this played by a full orchestra as it was originally written.  And this orchestra is wonderful under the baton of David Chase.  It is lovely, lush and thrilling.  Rodgers and Hammerstein would be thrilled, I think.

The Complete Broadway Score: Here is the complete, original score as first presented on Broadway.  It is so complete, that it includes both numbers from the dinner party scene, "The Grand Waltz" and "Landler."  Free of any movie-version interpolations, even some Broadway fans may be surprised to hear that "My Favorite Things" is sung as a duet between Maria and the Mother Abbess, and that "The Lonely Goatherd" is the number Maria and the children sing to relieve the fear of a booming thunderstorm.  Also included, thankfully, are two songs for Max and Elsa: "How Can Love Survive?" and "No Way to Stop It."  Nice, too, for fans is that it is all done in the original order of Opening Night in 1959. 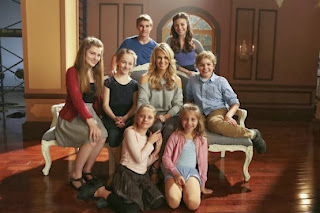 Nice work from the Kids: Even on the recording, the kids don't come across as cutesy or cloying.  They seem down to Earth and genuine.  How many productions of the show have you seen where it was ruined by cheesy, smarmy kids?  I've seen too many.  And Ariane Rinehart (Liesl) and Michael Campayno (Rolf) show off some lovely voices and song interpretation skills with "Sixteen Going on Seventeen."

Carrie Underwood: Remember, I am reviewing the CD, not the show.  And, based on the recording, I can see why she has legions of fans, and why NBC chose her to draw in the viewers.  The fact is that she sings the score beautifully - even in her duet with the monumental Audra McDonald, Underwood holds her own.  She even manages to convey character and affection in her numbers with the children.  Is she Julie Andrews or Mary Martin?  No.  But she has a terrific voice that really fits the score very well.

The Broadway Folks: When the nuns and ensemble list reads like a who's who of current Broadway talent (including Ashley Brown and Nikki Renee Daniels, no less), you know you are in for a treat, theater fans!  And when most of the major supporting roles are taken by Tony winners, we can all relax.  It comes as no surprise, then, that on the recording alone, Christian Borle, Laura Benanti and Audra McDonald practically steal the show.  Man, are they good!  (Will Audra win her first Emmy?)

Broadway fans will want this CD just to have everything Audra, Laura and Christian sing, I think.  Fans of the show will definitely want this full, well-produced version of the score, as will Underwood fans, I'm sure.  Mostly, though, it make me so happy that this was even attempted.  We all should all get behind whatever they come up with next.