Need a last minute stocking stuffer to get your Broadway lover into the holiday mood?  This new CD could be the answer.

I had a pretty limited appreciation for "holiday shows - I always found them to be overly saccharine, and generally of "community theater" quality.  Then the Broadway wave of holiday shows started, and I managed to stay away until Elf, which I found delightful, and last year's A Christmas Story, which was a riot and truly was one of the best musicals of the entire season.  (And I've heard some great things about White Christmas, though so far I've managed to miss it.)  I know that all of these titles are based on beloved films, and so maybe others' feelings about them may vary.  I enjoyed both as a first time viewer of both stories, and maybe that's part of the reason I had such mixed feelings about Dr. Seuss's How the Grinch Stole Christmas!, a tradition in my family and so many with people of my generation.  We never missed it - we knew every word of dialogue and my dad does one heck of a rendition of "You're a Mean One Mr. Grinch."  While I appreciated the efforts of all - after all, this was the show that started the trend - of all of them, this is the one I liked least.  Bloated unnecessarily, and so twee it gives me cavities, I didn't really think it was a needed addition to the Broadway canon.  And to be completely fair, I hated the full-length feature film with Jim Carrey. Still, I will give credit (as much as I can, anyway) where it is due, as the recently released World Premiere Recording of the stage show is a finely produced CD. 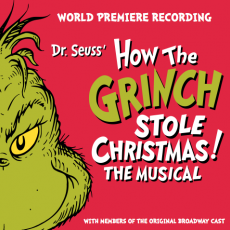 OK, so Timothy Mason (book and lyrics) and Mel Marvin (music) have musicalized every possible moment of Dr. Seuss's little book.  And then some - including the addition of "Old Max," the grown up version of the poor puppy forced to drag the Grinch's sled all around Whoville.  Some of it is nice, and Mason's lyrics mostly fit in with the Seuss vernacular.  And they made a very smart move by including the songs from the TV cartoon, as well as the big number from the film version (included here as a bonus track).  Does it really add to the story?  Not really.  And those little Whos are almost excruciatingly cute.  No wonder the Grinch hates them so much...

But there is also a lot to praise about this recording itself.  First and foremost, you get a fun performance by multi-Tony-winner John  Cullum as Old Max, and a delightful scenery-chewing turn by the always fun Patrick Page, Broadway's king of villains.  His "You're a Mean One, Mr. Grinch," backed up by Cullen and Young Max, Rusty Ross, is awesome!

And there is much to be said for the rest of the cast who sing the heck out of this simple score, most of them Original Broadway Cast.  Then, too, is the nice sound of the full orchestra, led by Joshua Rosenblum, who also provided the musical and vocal direction.

Would that all cast recordings were given this treatment.  When the only criticism I can give it is that the lyrics aren't included, you know there is something here.  The booklet includes a full synopsis which will certainly fill in the holes for those who only know the book or TV show.  The writers provide a nice liner note, and there are several nice production photos. Talk about complete!  In addition to the two bonus tracks and all of the main songs, there is the overture, six reprises, the finale, the bows music and the exit music.  There are so many Broadway scores I would have loved to have recorded with this much care.

So, it isn't my favorite cast recording.  But before you call me a Grinch, know that I'll probably haul it out each holiday season to get me in the mood... along with Elf and A Christmas Story.