Only time will tell for sure how history will treat the last new musical of the season .  Will it be greeted with the critical orgasm Susan Stroman's The Producers got, only to be seriously tempered by the realization that, by and large, it was the original cast that really made that otherwise pedestrian show work?  Or will critics (and audiences) recognize that Bullets Over Broadway is really a slick retread of that other show (and many others) that isn't as funny, clever or thrilling as it thinks it is?  When all is said and done, what will this mostly boring Woody Allen musical be remembered for?  Will it be the hot dog song and dance number?  Or maybe it'll be the most ridiculous, inane finale ever conceived for the stage?  Or will it be the already infamous "Irving Berlin" joke?  My guess is probably the joke, but it hasn't even been a week since I've seen it, and I can't wait to finally forget the whole thing.

First things first: I've never seen the film upon which this show is based.  I've only seen one Woody Allen film, Everyone Says I Love You, which I didn't really love or hate.  And I have not been keeping up with the various scandals that plague the man's life.  So I really went into this thing cold.

There are three things that are above average about Bullets (otherwise, I'd have given it a much lower grade).  The scenery, designed by Santo Loquasto, is stunning.  Always nice to look at, and full of fun surprises, it manages to be old-fashioned - in the very best sense of the word - and still period-appropriate, and interestingly enough, also kind of modern.  Similarly, William Ivey Long's lavish, painstakingly detailed and very plentiful costumes are a sight to behold.  I would be disappointed if they weren't both at least Tony nominees.  And last but not least, actor Nick Cordero (himself a likely Tony nominee) who, as gangster-hit-man Cheech, rises above the banality of his role to deliver a character that we can fear a little, and love a lot.  He's the very definition of "triple-threat": a fine comedic actor, a great character singer, and one heck of a hoofer.  And since he has to play most of his scenes against a one-note loudmouth, it's all even more remarkable. 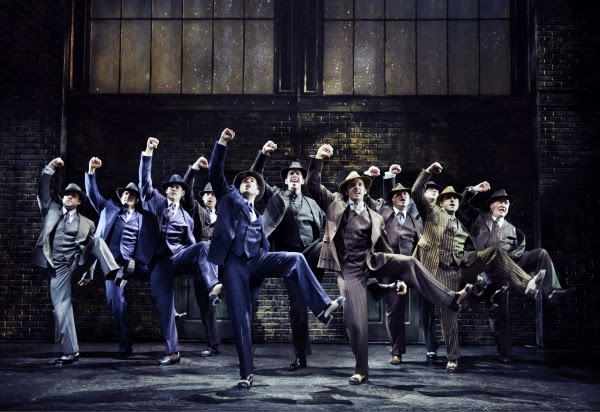 Now here's where things get a little more complicated.  You see, there really isn't anything wrong with much of the rest of the show (save for a few things - see below), but there is an awful lot of mediocrity.  In this case, the sum isn't as good as the parts.  As I alluded to earlier, Ms. Stroman has come up with a slickly directed piece that looks great as you are watching it.  But then, as your mind goes over what you've seen you realize that Bullets is a sub-par re-hash/mash up of the superior 42nd Street and Guys and Dolls and the only slightly better The Producers.  The problem with it being so much like the latter is that Ms. Stroman was responsible for both - in the very same theatre - and this show has much less going for it.  For all of her slick staging and her plentiful choreography none of it is terribly original.  Where is all of the jaw-dropping creativity of her best "old-fashioned" show, Crazy for You? And where she isn't doing Stroman-light, she's getting her moves from 42nd Street ("Shuffle Off to Buffalo" comes to mind) and Guys and Dolls ("Luck Be a Lady" comes to mind).  Of course, as truly embarrassing as it is, "The Hot Dog Song" does have one thing going for it.  I often complain that shows and directors either hold back or are afraid to "go there."  But I'll give credit where it is due: "The Hot Dog Song" goes for broke.  The sock garters are almost too much, but who can resist a huge wiener? (See what I did Stroman did there?) 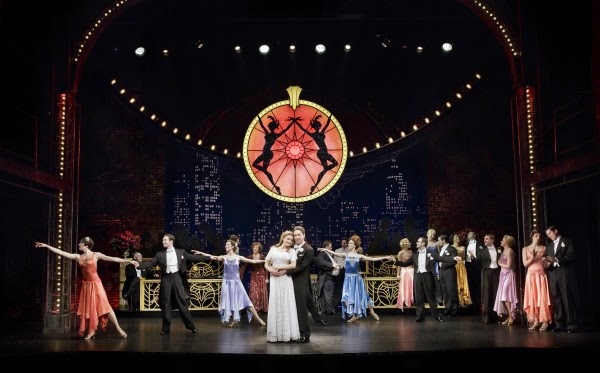 As far as the performances go, like I said, no one does anything really wrong, they just don't really do much that is original.  Lenny Wolpe is the slightly nervous, pragmatic yes-man-Broadway producer.  Vincent Pastore is the gruff gangster (and he does his very best comic version of his Sopranos shtick).  I can't imagine why - other than she needed the job to keep her AEA insurance - Tony-winner Karen Ziemba would even take on the thankless role of ditsy Broadway second banana.  I'll give her credit for handling her dog duties (Trixie) with aplomb. Brooks Ashmanskas does a better than decent job with the typical hoity-toity actor who isn't as good as he thinks he is, and Ashmanskas gets a few bonus points for being a human sight gag, and extra credit for going through with it, even though the joke gets less funny as the night wears on. Betsy Wolfe is close to terrific - she nails her big solo - but never really gets to do much with a poorly written role.

As for the leads, Zach Braff does a nice job for his Broadway debut.  But he also isn't doing much more than a pale imitation of Matthew Broderick playing at being neurotic.  He even sounds like Broderick.  Still, he holds his own, and I'll even go so far as to say that I hope he stays with the whole "Broadway thing."  And Marin Mazzie, whom I adore generally, is larger than life as Helen St. Claire.  She is commanding, very funny and in fine voice.  I've come to expect as much from this diva.  But, like so much of the show around her, I always felt like I'd seen it all before.  She looks like a young Carol Burnett doing a Sunset Boulevard send up.  (Actually, when they get around to reviving Sunset Boulevard (the musical, not the send up) I vote for Ms. Mazzie as Norma, Mr. Cordero as Joe, Ms. Wolfe as Betty and Mr. Braff as Artie.  See what I mean about seeing it all before in Bullets?)  But in the spirit of giving maximum credit where it is due, Ms. Mazzie gives it her all when she delivers that nasty infamous Irving Berlin joke.  And she almost pulls it off.  But I've seen her enough to know that a little bit of the feigned discomfort Helen gives off during the audience's stunned-silence-slash-uneasy-laughter is also some real Marin Mazzie discomfort.  She's professional enough to do her job and classy enough to know it's not nice.

Which brings me to the two worst things about this show:  Woody Allen's book and the performance of Heléne Yorke.  Ms. Yorke has the dumb broad thing down, and the crowd laps her up like cream.  But of all the things we've seen before, she does the very least she can to make it more than it is.  Her nasally Brooklyn floozy accent is funny - for the first few lines, anyway.  And then it sets in that there will be no variation on this well-worn theme (Vivian Blaine/Faith Prince did it better in Guys and Dolls, and Rachel York took it to a new level in Victor/Victoria). Ms. Yorke has no more tricks up her sleeve.  I mean we get it, already - the character is dumb and crass, pandering to the lowest common denominator.

But to be fair, Ms. Yorke, and everyone else in it, can only do so much with the material they have to work with.  No, the music isn't to blame - most of the songs, save for the horrid finale, fit the show.  And between the added/changed lyrics by Glen Kelly, and the vast majority of them being unfamiliar to most of us, it may as well be a new score.  The blame lays almost solely at the feet of Mr. Allen, who has done nothing from what I can tell besides cram a bunch of cliches and stock characters from old movies and old TV variety shows into one story.  And all of it with a slimy layer of off color jokes that are less funny and even less titillating.  There is nothing tongue-in-cheek or even clever about about the multitude of dirty jokes; instead, they give off the whiff of skeezy, perverted humor.  I picture him writing this and giggling over each line like a young adolescent sneaking a peek at his dad's hidden Playboy.

A lot of the people I saw the show with seemed to really enjoy it.  But the after show chatter revealed very mixed reviews.  Maybe audiences will see Bullets Over Broadway for what I think it really is.  Like my father always says: a shiny turd is still a turd.