As I was watching Violet, which opened yesterday, it struck me that this 17 year old musical felt very contemporary, and I wondered how it must have been received by audiences back then.  Full of intertwining songs (music by Jeanine Tesori lyrics by Brian Crawley and quick scenes (book by Mr. Crawley), it is a simple story - a disfigured girl travels by bus to seek a miracle cure from a 1960's televangelist, and it becomes a journey of self discovery.  As is so common today, the show gets caught up in the minute details of its characters and themes, creating a rich tapestry of quirky, easy to relate to people and ideas thoughtfully addressed.  There are no broad, "musical comedy" strokes here.  No, the joys of this piece come from the more realistic details and the very theatrical presentation of them. 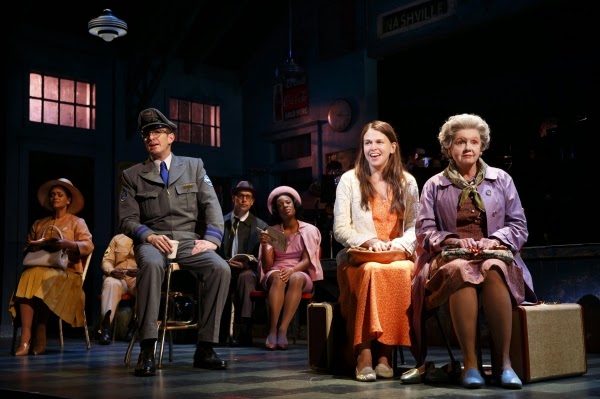 Director Leigh Silverman could have easily inflated this slightly-larger-than-a-chamber-musical musical into an unnecessarily bloated extravaganza, and designer David Zinn might have tried to create a set that included a bus and various sets depicting all of the places that bus stops.  But this little gem isn't about the transportation or the locations, really, it is all about the people.  And though the unit set could be mistaken for the almost production of Pump Boys and Dinettes announced earlier in the season, it suits Violet just fine.  Ms. Silverman has taken great care to make sure the piece flows - it is a fast hour and forty-five minutes - with just the right amount of lingering over the more important moments.  Though it could be argued that this is little more than a staged reading, it certainly doesn't skimp on theatricality, easily moving between past and present, and sometimes showing both at once.  We never doubt for a minute that we are watching people on a Greyhound - your mind fills in the details effortlessly.  This is a wise, thoughtful conceit that also makes an important leap of imagination easier, too.  Since the story is about Violet and not her disfigurement, you never see her scars, but you can definitely imagine them (not to mention letting us "see" her emotional scars unfettered).  And that is made quite easy, thanks to the brilliant performance by Sutton Foster. 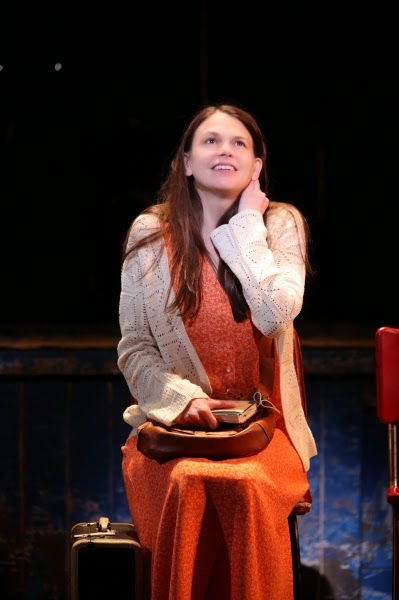 Nothing in Anything Goes or Thoroughly Modern Millie really lets on that Ms. Foster is just at ease in a low key, emotionally charged role as she is being a comedienne with tap shoes and a big grin plastered on her pretty face.  Here, she is the very picture of "plain."  I'm not even sure that she's wearing any make up.  Further, this completely winning performance is remarkable for its consistently understated, economical precision, making the really emotional highs and lows all the more powerful.  She has made the wonderful choice (rare this year, particularly) to trust the material and let the less-is-more approach take the audience on the journey of the season.  That she can sing (just as effortlessly) is a given, but her depth of acting here is a pleasant surprise.  A Tony nomination is surely in her future.

By and large, the company that supports her is on the same page, both in tone and style, creating equally interesting and well-developed characters.  Standouts in the small ensemble include Rema Webb as the fierce, golden-voiced gospel singer, and the delicious Annie Golden who alternates quickly between playing an elderly woman and a drunken prostitute with amazing ease.  Less successful is Ben Davis who is just a tad too much as the televangelist, making the broad stereotype he plays stick out in a bad way against the grounded realistic performances of everyone else.  And there is Emerson Steele, who, as Young Violet, has a Southern accent so thick she is virtually unintelligible.  In the very opening number, "Water in the Well," I understood little more than the first word, "Mama," and the last words, "in the Well ."  Everything in between was so much "blah blah blah" to my ears.  And as the show progressed, it struck me that Miss Steele has done little in the way of connecting with Ms. Foster, ineffectively letting us see the girl behind the woman. 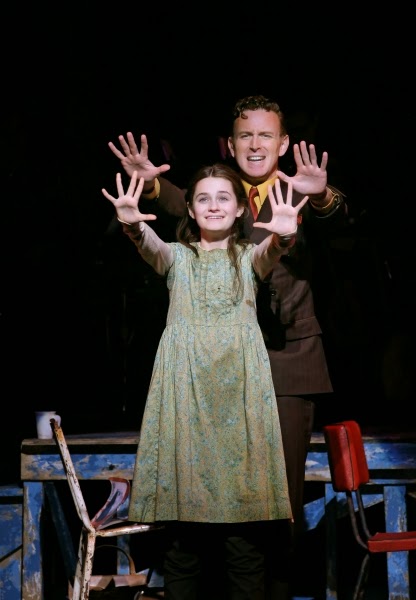 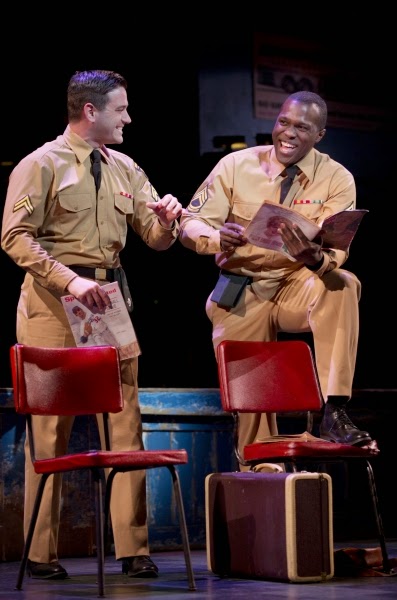 Ms. Foster's three leading men, though, are terrific support for her star turn.  Alexander Gemignani does well with the least to work with, as Violet's brooding, distant father.  His final scene, in which he confronts a ton of built up emotional baggage, is a wonderful pay off .  Colin Donnell is also great as the swaggering cad of a soldier, Monty, working his charms and sex appeal on both Violet and the audience with skill.  But the real stand out here is Joshua Henry as Flick, another soldier, who bears a similar "scar" to Violet - the color of his skin - and who understands Violet better than she understands herself.  His big solo number, "Let It Sing," rightfully stops the show, and his performance is as inspiring as it is powerful.  He continues to be one of my favorite Broadway actors.

Though Violet has everything going for it - a theatrical staging, a thoughtful, thought-provoking book, and a fine country western/gospel infused score, and several brilliant performances - I left feeling slightly underwhelmed.  When all was said and done, I felt like I should have been brought to tears, or at least feel emotionally spent.  I can't even articulate where the fault lies (maybe it is just me).  Don't get me wrong, I cared about it all throughout the performance.  This wonderful journey was moving.  I just wanted to feel more.