REVIEW: The Most Happy Fella 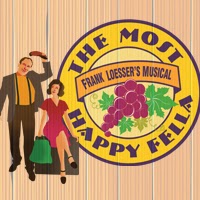 For musical theatre lovers, one of the greatest pleasures we get is when a classic musical is revived well.  Another is seeing favorite performers surprise you and delight you with their efforts.  As it so happens, I attended two revivals, both full of some of my favorite performers.  One of them ranks among the worst of the season (that review will be posted Wednesday).  The other, The Most Happy Fella, ranks among the best of this and several recent seasons.  Unfortunately, if you didn't get to see it over the past week, you missed it, as this most recent production in the Encores! series closed yesterday.  And boy, did you miss something special!

The sheer logistics of giving this show the treatment it deserves are daunting - there is a huge cast of singers and dancers, and Frank Loesser's lush, alternately operatic and musical score needs a huge orchestra.  In today's Broadway economical environment, a commercial revival seems very unlikely.  But that is the beauty of Encores!  There were a whopping 77 people on the New York City Center stage - 38 each in the cast and orchestra, and conductor Rob Berman, whose skilled baton and masterful musical direction brought this masterpiece to loving life.

As a big fan of Loesser's Guys and Dolls and How to Succeed...I am kind of embarrassed to admit that the very little I knew about Fella was limited to a vintage I Love Lucy episode.  But, given how dissimilar the first two shows are, it wasn't too surprising that Fella is even more dissimilar to anything he wrote before.  I can only imagine the reaction of the first-nighters in 1956.  Things we take as pretty regular today must have seemed very unusual then.  Mostly through-composed, the show features opera-style numbers, musical comedy numbers, songs sung in counterpoint, some that are short snippets that fit the precise moment, and still others stop midway and then resume later (a musical running joke, if you will). It is a complex, beautiful tapestry of song, dance, and interludes.  Today, we'd say things like "that's so Sondheim," but Sondheim has barely gotten started - West Side Story hadn't even opened yet.

Casey Nicholaw proves again that he has a variety of skills in his directorial arsenal.  This production requires economy - there is little scenery and no effects to rely on, and pretty limited space, and yet he has created a stylized, smoothly flowing production full of memorable moments.  And his dances are just as smooth and definitely flowing, combining ballet, jazz and traditional Broadway-style hoofing.  There are several times when the huge company is dancing and it never looks crowded or like any compromises were made due to space restrictions, either.  Even more to his credit is that he did all of this while shepherding Aladdin to its opening night!

But the best part of this thrilling evening was watching the principal cast in action.  Fine turns by featured actors include Bradley Dean, Zachary James and Brian Cali as the trio who sing the very funny "Abbondanza," and Kevin Voortman does nice work as the doctor, a voice of calm and practicality.  Jessica Molaskey makes quite an impression as the antagonist, no small task considering what a downer of a role she has.

The secondary couple of the story, providing much of the comic relief, is wondrously brought to life. The utterly charming Jay Armstrong Johnson is a real song and dance man here, singing the show's most famous song, "Standing on a Corner."  His "partner in crime" is the perfectly cast, big-voiced Heidi Blickenstaff, who opens the evening with the hilarious lament "Ooh! My Feet!," an ode to anyone who has ever waited tables.  And the two of them lead the company in the rousing dance number "Big D," which got a huge, well-deserved hand.  They were terrific.

The central love-triangle of the story features Cheyenne Jackson as the suave, handsome vineyard foreman, Joe.  Loesser's score assigns the character a pair of smoldering, sexually charged numbers ("Joey, Joey, Joey" and "Don't Cry") with which Jackson holds everyone in the theatre spell-bound.  And the absolutely luminous Laura Benanti shows off yet another one of her amazing skills in the operatic style required of her character, Rosabella.  What a singer!  What an actress!  Could this really be the same woman who sang to a dumpster in The Wedding Singer?  Then there's the commanding performance of Shuler Hensley, as the titular "fella," who goes from the highest highs to the lowest lows and back again.  Hensley handles each moment and emotion with such depth and variety, and all with a booming voice and commanding presence.

It is said that they just don't write 'em like that any more.  And it is so true - tight story-telling, a variety of emotional characters and an even wider variety of music just doesn't happen like this much anymore.  And a lot of what we look for these days in the "modern musical" was already around nearly 60 years ago.  We have so much to be thankful to Frank Loesser for.