CONTEST: WIN Tickets to Off-Broadway's UNDER MY SKIN 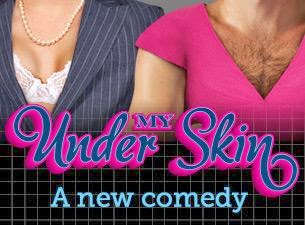 THIS CONTEST HAS ENDED AND THE WINNER HAS BEEN NOTIFIED!  THANKS FOR PLAYING!  LOOK FOR MORE CONTESTS SOON!

I'm excited to bring you a contest for a new Off-Broadway play that has some great stage and TV stars, and written by the duo that provided scripts for three of my favorite classic TV sit-coms.  And it's all about some really topical issues - healthcare and sex.  Check out the logo - looks like some craziness will be happening this spring at The Little Shubert Theater (a GREAT venue - if you haven't been there, you really need to check it out)!  You'll get to see it if you enter to win!

THIS CONTEST WILL END AT NOON ON WEDNESDAY, APRIL 9 AT NOON!

ABOUT THE PRODUCTION:
Take the dashing CEO of America’s leading healthcare provider, a single mom from Staten Island, and an outrageous twist of fate and you’ve got the makings of a sexy and outrageous new comedy, UNDER MY SKIN.

Kirsten Sanderson directs the new off-Broadway comedy about three things we all want but can’t always get: Sex, Love & Healthcare.

Tony and Drama Desk-nominee Kerry Butler (Xanadu, Catch Me If You Can) and film, TV and stage actor Matt Walton (Burn After Reading, One Life to Live) star in the play that will leave you in stitches.

UNDER MY SKIN is written by the husband and wife writing team Robert Sternin and Prudence Fraser, known for their hit shows The Nanny, Three’s Company, and Who’s The Boss? It’s the uproarious out-of-body experience that brings “he said, she said” to a whole new level and proves a man can’t really understand the opposite sex until he’s walked a mile in someone else’s stilettos.

THE CONTEST
1.  Which star of Sternin-Fraser comedy The Nanny is currently starring in Brodaway's Cinderella?
A. Fran Drescher
B. Daniel Davis
C. Charles Shaughnessy
2.  The late John Ritter, star of Three's Company starred on Broadway in which Neil Simon play:
A. Rumors
B. Proposals
C. The Dinner Party
3.  Who's the Boss? star Judith Light won Tony Awards for her performances in all of the following plays EXCEPT:
A. Lombardi
B. Other Desert Cities
C. The Assembled Parties

MORE ABOUT THE SHOW: ONLINE and SOCIAL NETWORKS