REVIEW: Hedwig and the Angry Inch

Hedwig and the Angry Inch is an excellent, exhilarating and unexpectedly deep musical.  It is also one of the more perplexing shows I've ever seen.  To be completely honest, if it weren't for the cast, some amazing (and loud) music, and some nice staging surprises, I'd probably have written this one off.  I came into it with only very cursory knowledge about the basic set up of the show - I'd never seen it on stage or on film, and I'd never heard any of the music.  And, quite frankly, I'm getting a little tired of drag shows.  And then Neil Patrick Harris took the stage. 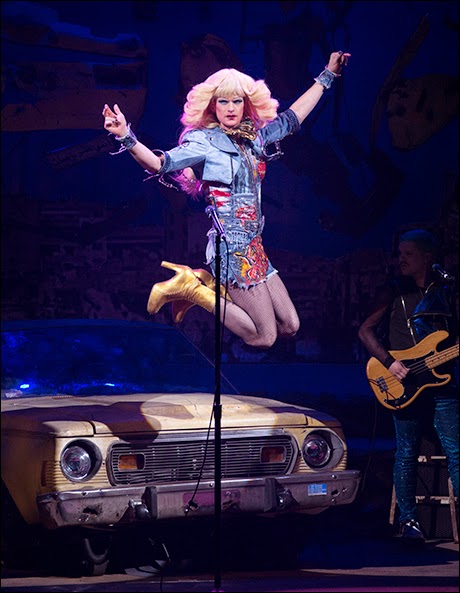 Now, what I'm about to say might upset passionate Hedwig and/or NHP fans, and it probably will seem to fly in the face of the grade I gave it.  There are two big things that hold this back from a perfect A+: Mr. Harris and the rather baffling ending.

As Hedwig recounts her rather tumultuous life to date, Mr. Harris is required to switch voices as each of the significant people in her life become a part of the story.  He switches easily and expertly with a precision that is rather astonishing.  The trouble is that Hedwig's own East German accent is many times inconsistent.  (I'd call out any actor for such a thing, it is nothing personal.)  And, furthermore, as the show is supposed to be happening the day of the performance, a lot of pop culture references - and an abundance of Broadway references - come flying out of her mouth at a rapid pace, punchlines firmly attached.  Maybe if any other person were doing this, I wouldn't even have noticed, but after awhile, it started to sound a lot like Mr. Harris' hilarious Tony Awards bits. When he was not doing Broadway shtick, Hedwig herself was in full command.  And then Neil Patrick would drop by for a visit. Long story short, despite his inevitable Tony nod (and, likely, win), I don't feel that he was totally immersed in his character. 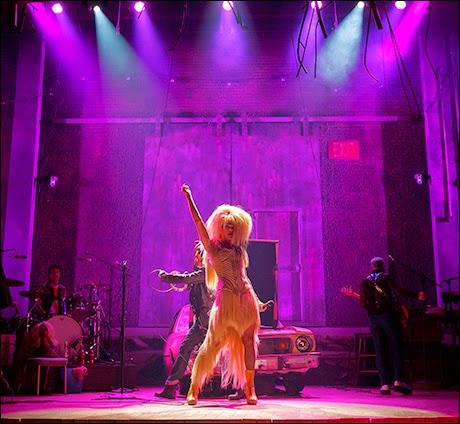 And I know for a fact that I am not alone in feeling this way about the plot:  the last 10 minutes or so lost me completely.  Was Hedwig really her own nemesis, Tommy Gnosis?  After all, when we see a picture of Tommy, it is NPH sans drag with a cross painted on his forehead.  And the last thing we see is Mr. Harris sans drag with a cross painted on his forehead.  Or is Hedwig really telling the story of her partner-in-crime, Yitzhak? After all, throughout the show we see Yitzhak in FABULOUS drag king regalia, only to see him finally revealed in very fine Hedwig-esque drag.  I've tried to wrap my head around this now for the better part of the last four days.

So, you might be wondering why I didn't give the show a lower grade.  Well, it is simple: despite my misgivings, Neil Patrick Harris is giving a true star turn performance.  Whatever qualms I have about the details of his performance, it doesn't matter. I know a career defining moment when I see one. This. Is. One.  The guy is magnetic and mesmerizing, not to mention one hell of a rock star. Be warned: if you are going to see Doogie Howser or Barney Stinson, you will not see either of them.  You will see a real, legitimate star making a difficult role accessible and endearing, and, above all, achingly human. All is forgiven. 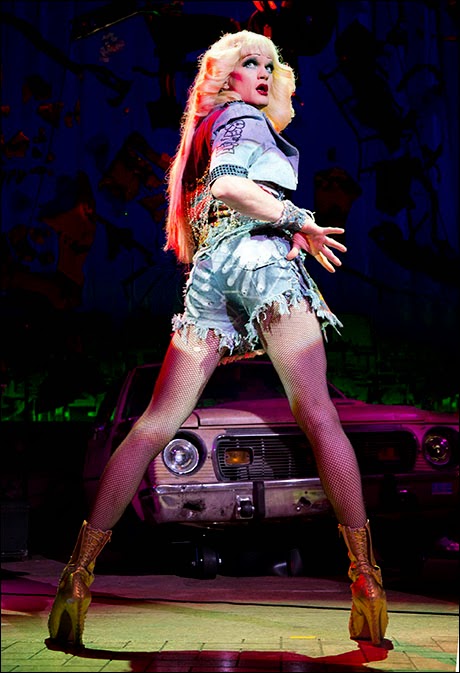 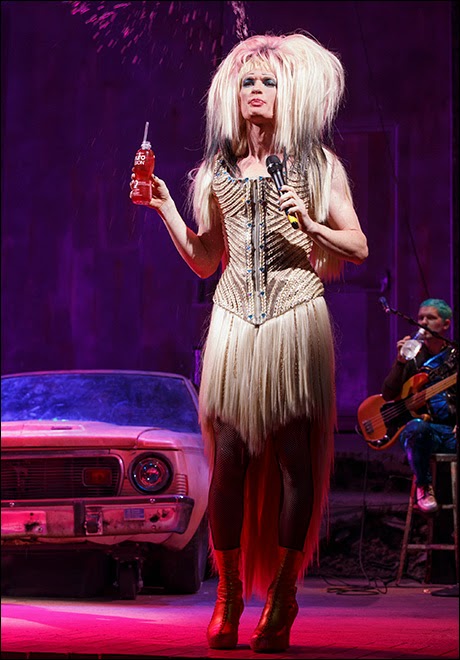 And then there's the rest of the show: the perfect storm of creativity, excellent performances, and superb design.  The book by John Cameron Mitchell is a heady mix of laughs and thought-provoking drama, which, while essentially an extended monologue, allows for more than enough interplay between Hedwig, her band, The Angry Inch, her man/assistant, Yitzhak, and her completely enraptured audience.  Wisely, the laughs and the drama are given a wonderful balance. And Mitchell's book, coupled with Harris' take on the role, feels almost completely spontaneous.  Similarly, there is a terrific balance between edgy punk tunes and more soulful ballads in Stephen Trask's high impact score.  "Wig in a Box" is a riot , while "Tear Me Down" is an awesome rock number pregnant with meaning.  Michael Mayer (and choreographer Spencer Liff) has directed a very tight piece of theatre that moves like lightning and lingers in all the right places.  That he was able to keep the whole thing reined in, and still completely "out there" is a real achievement. 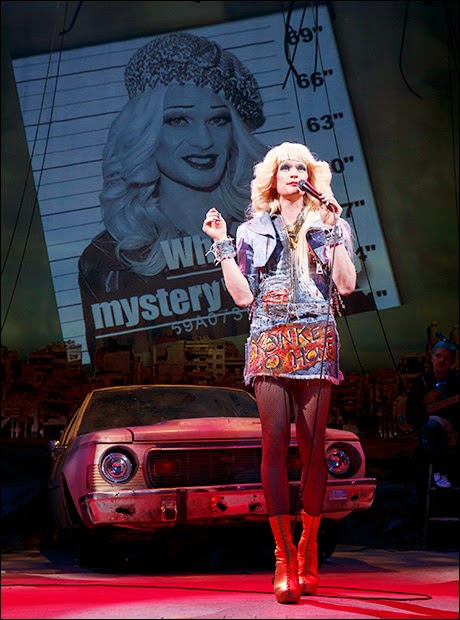 The show also gets a nice boost from the design team. Hedwig's physical look is an exciting mix of androgyny, glam rock, and drag kitsch - think La Cage aux Folles meets trailer park gal with a nod to David Bowie - all brought together by the costume designs of Arianne Phillips and wig/make-up design by Mike Potter.  All of the action takes place on the set of Hurt Locker: The Musical (please don't let this happen...ever), and it is full of many surprises, all designed to make the highest possible impact by Julian Crouch.  The entire thing is lit like a huge rock concert with style and lots of flare by the excellent Kevin Adams.  Kudos go to Benjamin Pearcy for 59 Productions, who have provided some truly wonderful projections, particularly for the showpiece number, "The Origin of Love."  The sound design by Tom O'Heir is flawless - you can hear every word and you don't leave deaf.

Finally, as much as NPH owns this show, he is backed up by some truly spectacular performers, including the best rock band to hit Broadway since American Idiot: The Angry Inch.  The group is made up of Justin Craig, Matt Duncan, Tim Mislock and Peter Yanowitz. What a sound they make!  But the real treat here is the brilliant (and likely Tony nominated) performance by Lena Hall, as Yitzhak.  She is by far the best drag king I have ever seen.  Had I not known she was a woman going into it, I would have has some serious doubt as to what her gender really is.  And her final transformation is just as remarkable - a glittery cherry on top of one fabulous sundae! 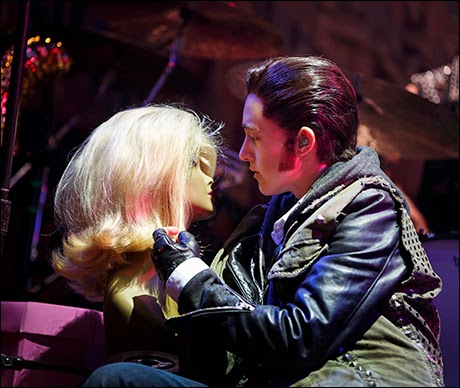 What a remarkable piece of theatre it is when it can overcome flaws.  Turns out a real star and a perfectly rendered production can compensate for an unsettling ending.  Of course, I'd rather leave a little off-kilter and keep thinking about a show for days later, than to leave with all the answers and forget all about it by the next day.  Welcome to Broadway, Hedwig!