I fully realize that this review will probably miff more than a few of you.  I know all too well of the fervor you passionate Les Miz fans have for the show.  Believe me, I know.  You see, after having fallen asleep and pretty much loathing what I saw when I sat in the audience of the original production mere days after its official opening, I was teased, taunted and even lost a friend over Les Misérables.  In the intervening years, I saw the original version several times, warming up to it, and discovering some really great performers along the way.  But, I'll be honest; I will never love this show the way so many of you do.

So why subject myself to nearly three more hours of something I don't really like?  Well, this new revival is full of performers I admire (and I was very excited to see the world renowned Ramin Karimloo), and it is being given a new staging, so, I thought, that might be of interest, too.  In the end, there were a few things I did enjoy, and I'll go through those first. 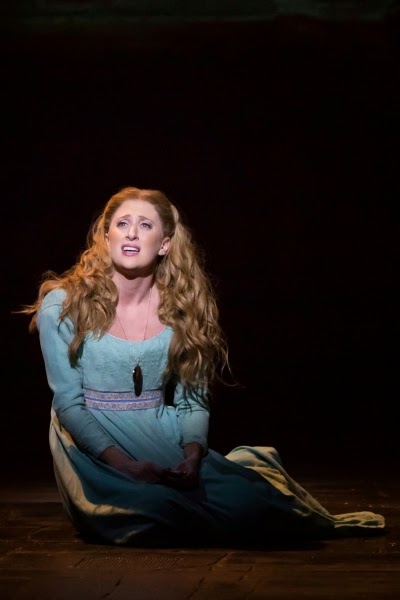 There is exactly one compelling reason to see this revival: Caissie Levy (right).  And she's pretty much it.  She has a stunning, big-range voice, with an anguished lower register that climbs to the rafters with a powerful, crystal-clear belt.  Ms. Levy is the only actor in the cast that doesn't over do the melodrama, knowing just when to push the requisite buttons, and trusting in her material.  It is a knockout performance of strength and sorrow delivered with an urgent realness.  An amazing performance.

I also really appreciated the new design of the show by Matt Kinley, who very bravely eschewed all of the iconic scenery aside and came up with something new.  Very brave, and pretty successful.  I know people miss the turntable, and the collapsing barricade, but I liked the more earthbound and still theatrical design.  I particularly enjoyed the backgrounds based upon the paintings of Victor Hugo.  The whole thing has an artful look to it - nice to see some color.

And I loved the new orchestrations by Christopher Jahnke, Stephen Metcslfe and Stephen Brooker, which have really punched up the score.  It helps, too, that we can actually hear the nuances of their efforts, thanks to the superlative sound design by Mick Potter.

In the "some good, some not so good" middle ground is the direction and staging by Laurence Connor and James Powell.  There are some nice touches here and there.  Things start off promisingly enough, with a vivid and gritty (and a lot like the movie) opening in the bowels of a ship, but soon enough, things get kind of boring.  Then there's the moment where little Cosette first appears, broom in hand, looking exactly like the original book cover.  (Maybe that tired argument over who is on the logo will finally be put to rest.)  Very clever, indeed.  And there's also the moment just after the number "Turning," where the ghosts of the fallen students appear and end up in line with previously placed candles, which they, in turn, blow out as they disappear into the shadows. (The lighting design by Paule Constable is mostly too dark, except for the too obvious white lights that usher the dead into Heaven. Oddly, Jean Valjean doesn't get a white light.) 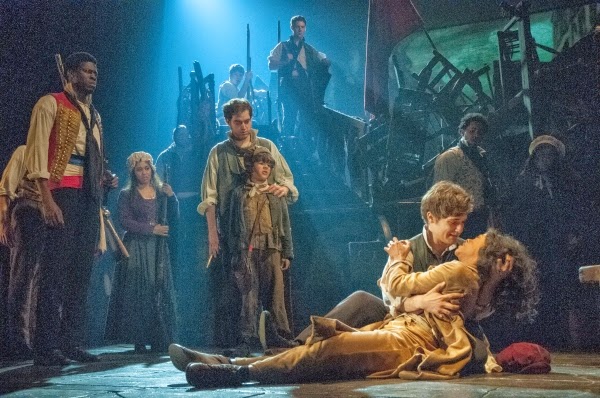 That same "Turning" moment also signals the "some not so good" of the staging.  Instead of completely abandoning the previous staging, Connor and Powell try to have it both ways, having the ladies sing the song while walking in a circle until they reach their marks.  (There is an exhausting amount of running off and on stage throughout the entire performance.)  It seems they feel "Turning" only works when something is actually turning.  Particularly disappointing are the times when they pander to the whim of the fans.  It is most painful during "One Day More," where everyone marches pretty much in place in a "v" while some ensemble member waves the big red flag behind them.  To add insult to injury, there's a projection of a Paris street moving - much faster than they they are marching - in case we can't figure out that is what they are doing.  And there is the most heinous of all - the arms out stretched image of the dead Enjolras, hanging almost off a wagon, but still in everyone's favorite pose, sans barricade.  It is unnecessary, though not surprising, which leads me to the "totally not good" section of this review.

This have-your-new-cake-and-eat-the-old-one-too way of doing things undermines the whole enterprise.  All it really does is point out the shortcomings that the original, beloved staging managed to camouflage.  Every time a reminder from the past shows up, it is a reminder of what was.  And then there is the almost complete lack of trust in the material.  The story is melodramatic and manipulating as it is, but by playing everything over-the-top (when the moment is sad, it is REALLY sad; when it is violent, it is REALLY violent, etc.) it creates a one note sensation, which, in turn, really makes the fact that there are really only a half dozen or so different melodies even more obvious.  And in their need to make this a more modern theatrical experience, they have hired every actor in New York that can sing with a vibrato on each and every power note - there is a serious warble battle going on at the Imperial Theatre.  As it becomes more apparent (and annoying) that everyone just has to take liberties with the tempos and per-syllable notes, the production resembles more and more American Idol on Broadway night. And does everyone who is making a point have to stand center stage and belt out every single note?  Worst of all, the two big group numbers of the night fizzle out - "One Day More" lacked any flare at act one blackout, and the finale was similarly underwhelming.  And who knew that Les Miz was a musical comedy?  The Thenardiers are the comic relief, but both Marius and Jean Valjean worked some lines for broad, not subtle, laughs.  Really? 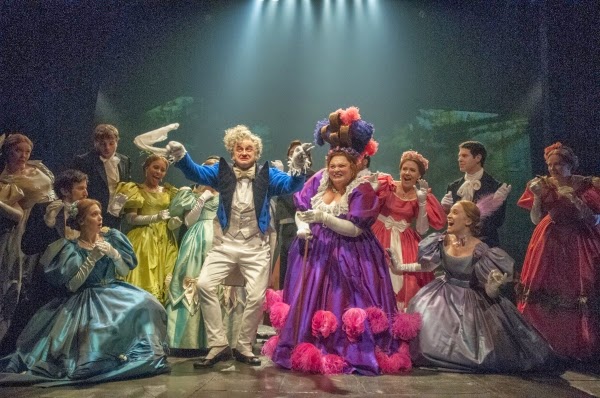 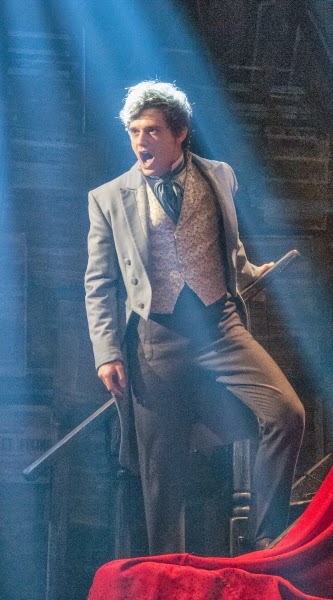 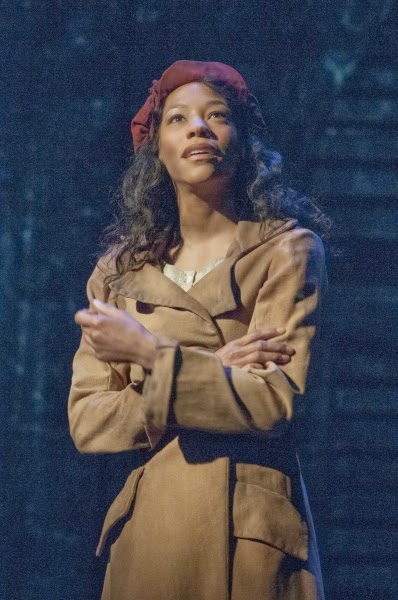 I feel I've already given this mess more time than it deserves, so I'll be brief in assessing the performers, Ms. Levy notwithstanding.  Cliff Saunders and Keala Settle (above, top) are so overplaying it, they are disgusting, then annoying and then just boring.  I actually blushed in embarrassment for Mr. Saunders when he "walked" into the wedding reception.  Sad.  Samantha Hill's Cosette is just plain dull, and made me realize just how little the character actually adds to the show.  Her child counterpart (Angeli Negron) is just as one note, and a cloyingly nasally one at that.  Kyle Scatliffe's Enjolras was equally uninspiring - I wouldn't have moved furniture for this guy, let alone risk my life for him.  And Gavroche, as played by Joshua Colley was annoying in that pesky mosquito kind of way.  (You could tell, even from the far reaches of the upper balcony, that the kid felt "really cool" giving Javert the finger!)  And, in the supporting cast, no one was more disappointing than Andy Mientus (above, bottom left), who I loved in Smash, and who had much more impact in a minuscule role in the off-Broadway revival of Carrie.  He sang OK, but I've heard better, and he acted OK, but I've seen better.  Marius was always the part I liked the best.  Not this time.  The less I say about terribly miscast Nikki M. James (above, bottom right) the better.  I don't want to be rude. 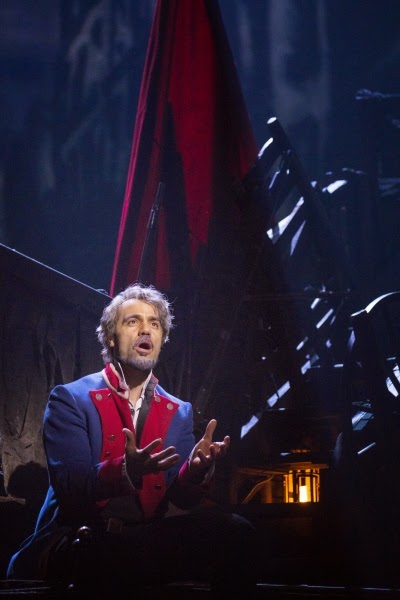 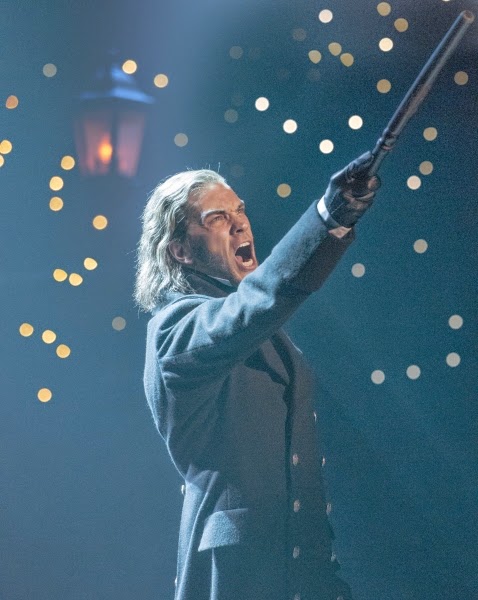 In the leading roles, Ramin Karimloo (above left)and Will Swenson (above right) are emblematic of the entire production - they have moments of brilliance, and a couple of hours of mediocrity.  Mr. Swenson comes out of the gate swinging.  He is mean, foreboding and has a surprisingly low, powerful voice.  It's a long way from that flip flop dress.  But his Javert loses steam as he offers very little in the way of variation.  100% menacing gets old fast.  His voice also lost steam - he yodeled the last notes of his death scene, which is too bad, too, since the staging of his suicide was interesting.  The buff and youthful Mr. Karimloo also starts out like gangbusters, ripped open shirt and all.  And his "Bring Him Home" was a highlight of the evening.  But the man trades charisma in for doldrums as Valjean ages, and the result is not a good one.  He fades into the scenery like an ensemble member.  I really don't see what all the fuss is about. (Clearly I am in the minority, as nearly everyone around me screamed and "whoo-hooed" throughout the performance for the entire cast.)

I think this production - despite a few good things - really makes the argument for waiting maybe another 25 years before it comes marching back to Broadway.  I can't think of another show less in need of being revived.  This is a Les Mizzzz for the ages.