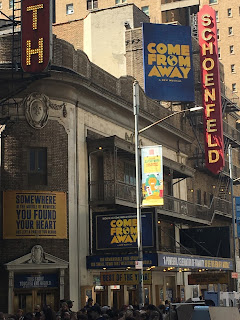 It says a lot about a production when a large part of the original cast remains with it years into its run (not to mention pre-Broadway runs). It says even more about how well it is maintained that a show as tightly directed and staged Come From Away runs so seamlessly even when three understudies are in, and you can't tell at all who they are, they are so fantastic.

For the record, the three were John Jellison (Oz and others) Tony Lepage (Kevin T. (Lumberjack Kevin) and others) and Happy McPartlin (Beulah and others). They were terrific. The natural chemistry between Lapage and Caesar Samayoa was particularly keen, and I really felt Beulah's warmth from Ms. McPartlin. And the rest of the company was in top form. As I said, this show is tightly directed and staged, fraught with the peril that even the smallest error would be very noticeable. But it is also a danger that the whole thing could become a rote, if well-oiled, machine (think the final years of the original Les Miserables). Thankfully, there is no sign of that.

As we become more removed from the events of that fateful day, the show remains as current as ever. This time around, I felt more like 9/11 provides more of a context for the performance and less of the actual story, which is not to say that the gravity of it all is missing. No, the respect and reverence for all involved is firmly in place. Rather, given the ugly times in which we now find ourselves, the piece serves as a reminder that people can be giving, selfless and loving. It also makes certain plot points have an all too fresh sting to them - listening to each person give their name, country and purpose for visit as they enter a friendly nation, the realization that Americans might not be as giving as their new hosts, the fear of someone who looks different.

Still, a return trip to The Rock was overwhelming and joyous - the fastest 100 minutes I've ever spent in a theater, too! Christopher Ashley and Kelly Devine's intricate staging is a real marvel even after having seem it before. The creativity and astonishing transformations are jaw-dropping. This time around, I also noticed how few places there are for the audience to applaud, and I think that is wonderful. Interrupting the rapid fire, ever changing, hectic events of that day would diminish their impact.  I continue to be amazed that people just don't leave in droves during the curtain call like at other shows. And that end of show "concert" by the remarkable band leaves you on a high!

The people portrayed in the show are people I would love to meet in real life. I already feel like a better person for having "met" them on Broadway.