Theater Can Be Anywhere: My Trip to the Rock and Roll Hall of Fame

I rarely go anywhere that I don't see theatricality. Sometimes, it is seeing the possibility of a stage version in some movie or experience. Sometimes it is the way other businesses present themselves. Still other times, most of the time, I see things that remind me of Broadway shows. Surely, I am not alone in this, am I?

Well, as fate would have it, a couple weeks ago, I was in Cleveland. Naturally, that meant a trip to The Rock and Roll Hall of Fame. I love music, so I was pretty much thrilled the whole time. The way many of the exhibits are set up are traditional museum - objects in glass cases, labeled. And we are talking things that are priceless and decades old, so it makes sense. But the way the displays are presented are consistently theatrical. Stage lighting is used throughout, and as you work your way through the decades, the settings of the rooms change. There's even a complete "garage" set up, where you can try out different garage band instruments, and even play a whole song with an impromptu garage band! There is a big multimedia show that shows highlights from induction performances. It is dazzling. And I didn't see one cell phone. Refreshing. 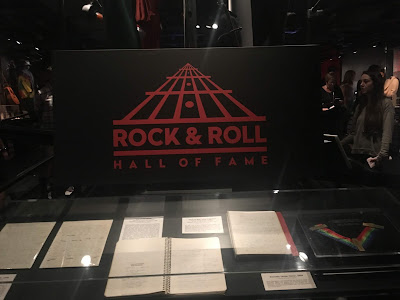 As you can see from the pictures, there are Broadway influences all over the place. This is one museum that is fun, educational, and full of history. Broadway needs this kind of treatment. I know there is a Broadway Hall of Fame, and it is a huge honor to be named to it. But really, your name is on a wall. One section has bathroom doors on either side. Classy.Considering how much of an achievement it is, why aren't there displays? Clips of performances? Set models? Costumes? And a multimedia show!!?? It's Broadway for Heaven's sake! The real shame of it all is that to even see the Broadway Hall of Fame (correct me if I'm wrong) you have to have a ticket to Wicked.

P.S.: I know there's a Broadway museum in the works. I'll believe it when I see it. In the meantime, if you get to Cleveland, go to this museum! It rocks.