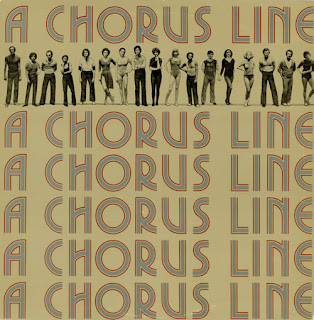 I make no secret that A Chorus Line is my all-time favorite musical. I've seen it so many times, I know most of the choreography, and can recite most of the line. So it probably will come as no surprise that I love the Original Broadway Cast Recording. I got my first copy of it on vinyl when I was in 9th grade. Yes, my first. I literally wore it out. Ah, how I remember that first time carefully peeling back the cellophane and opening the double fold to see that cool 70's style photo of the "One" kick-line, then marveling at the cover, which had foil letters all down the front. Then listening to it over and over, figuring out who sang what during the montage numbers, and memorizing each of those lyrics. Okay, I am also guilty of studying the cover so I could mimic each pose on the line. (I felt like Paul, but really wanted to be Sheila...)


Anyway, when I was older and got my first car, it had a cassette player in it. You can guess which cassette I bought first. Then, a few years later, when I got my first CD player, I got the CD, and later still, the "remastered and extended" CD. To this day, I still play it regularly. For the record, I also have the 2006 revival recording, and while I do like it, the original will always be my first love.


I can say with all honesty that I love every single song, and I'm grateful that even more music was released. Naming a favorite song or two will be impossible. But, I do have a certain affection for a few tracks. First, I love the opening number "I Hope I Get It," and I'm pretty sure I'm not the only one who tried dancing with Zach's steps. The ending punctuation of those chords...they give me chills every time. Then there is my go-to song for the shower and/or when I'm feeling particularly dramatic and want to belt along, "At the Ballet." (and rarely, but sometimes, I can still hit Maggie's "baaallleeeeeet," rarely...) It is so emotional. And, of course, who doesn't love "Nothing"? A great, relatable story song with a great twist ending. Most everyone has had a Mr. Carp in their lives, right? My "B Side" love lies with both versions of "One," with the theater geek in me loving the "rehearsal" version, and the music fan in me loving the reprise aka the "finale" version. The orchestrations are sublime throughout; the feel both 70's-ish, old-school Broadway, and timeless.

The cast recording - one of the biggest selling of all-time - is just one part of what makes A Chorus Line the stuff of Broadway legend. A real masterpiece.