They say characters in a musical sing when plain spoken words aren't enough. Emotions come out in a number of ways in musicals, to be sure. But one of my favorite things about such songs are when they lead to a character revelation: when Tony realizes he's in love with "Maria" in West Side Story, when A Chorus Line's Diana recognizes a painful truth about herself in "Nothing," or when Javert realizes in Les Miserables that he simply cannot live in a world where everything he believes in has turned against him in "Stars." Powerful, relatable moments in classic shows.
"Hit Songs" from Broadway Misfires:
Character Revelations
Such epic feelings are not reserved just for the cream of the crop musical, though. No, even a single performance running show can contain emotional highlights. The three shows below ran a combined total of just 154 performances, with one accounting for 148 of those. Long-running or not, each of these shows and their characters are worthy of consideration. 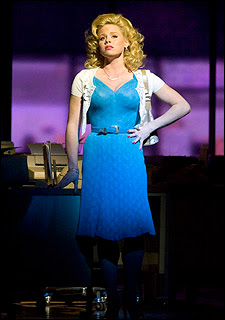 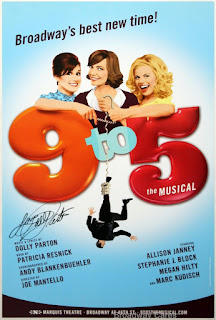 "Backwoods Barbie" from 9 to 5: The Musical
Music and Lyrics by Dolly Parton
Sung by Doralee Rhodes (Megan Hilty)
Favorite lyrics:
Now, I grew up poor and ragged, just a simple country girlI wanted to be pretty more than anything in the worldLike Barbie or the models in the Frederick's catalogFrom rags to riches in my dreams, I could have it all
I'm just a backwoods BarbieToo much make-up, too much hair
Don't be fooled by thinkin' that the goods are not all thereDon't let these false eyelashes lead you to believeThat I'm as shallow as I look cause I run true and deep
I'm just a backwoods BarbieIn a push-up bra and heels
I might look artificial but where it counts I'm realYes I can see how I could be misjudged upon first glanceBut even backwoods Barbies deserve a second chanceAll dolled up and hoping for a chance to prove my worthCause even backwoods Barbies get their feelings hurt
Why This Should Be a "Hit Song":
The awkward phrasing and loose rhyming are perfectly attuned to the character here. Eventually, Doralee can't handle the hurt feelings she has when her co-workers gossip about her and exclude her. And who hasn't felt the pain and embarrassment of being judged based on such superficiality as how they look or how they talk? You don't have to be a woman to relate to this. And it sure is cathartic to sing along with Megan! 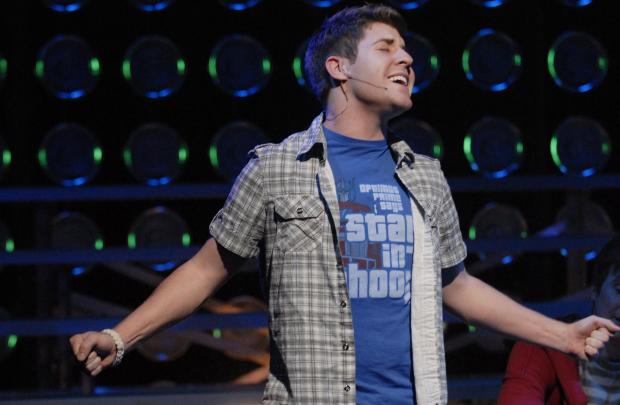 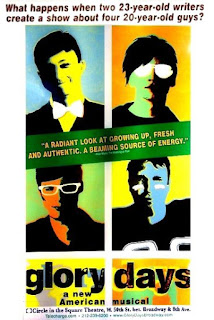 "Open Road" from Glory Days
Music and Lyrics by Nick Blaemire
Sung by Jack (Jesse J.P. Johnson)
Favorite lyrics:
When I was driving through the EastAnd my windows rolled down lowThere was so much air that I could hardly breatheI taught myself the landFrom the Blue Ridge to PoconosI became an expert on how the traffic flowedI loved my life alone on the Open Road
But then I met this kidWho wanted to go cross country like I didBut wouldn't hitch cause he had too much prideSo I offered him a rideWe learned about each other's livesAs we talked all through the nightAnd when he thought the time was rightHe kissed me in the carBeneath the starless skyAnd with that kissHe opened up my mindAnd we went drivingWe were drivingWe were driving
Just meA beautiful boyAnd the Open Road
Why This Should Be a "Hit Song":
Maybe this one hits close to home because the twist at the end of this song is that this young man is coming out to his best buddies, taking a real chance in doing so. Sure, there are lots of coming out songs in the Broadway canon, but this one has a certain authenticity - simple words, a cascade of details as he approaches the big moment - it just rings true in a musical about 23 year-olds written by 23 year-olds. With a different arrangement, this song could be on the radio! 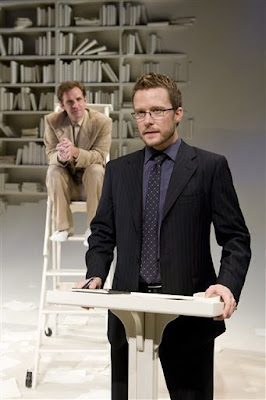 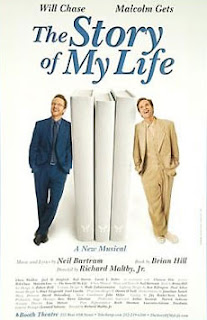 "The Butterfly" from The Story of My Life
Music and Lyrics by Neil Bartram
Sung by Thomas Weaver (Will Chase)
Favorite lyrics:
So the butterfly, he dreamed of the ocean.He longed to flutter high above the seas,But there are dangers in the skyFor a tiny butterfly.
So from his branchHe asked a question of the breeze."What makes you chase the riverT’ward the ocean?’"
Then the breeze told him a most amazing thing.‘I’m simply made up of the currents in the airThat start from the movement of your wing,Your tiny wing.’‘You’re a butterfly my friend,Powerful and strongAnd i'm grateful for the wayYou’ve always hurried me along.When you flap your wings to stretch yourselfIt might seem small to youBut you change the worldWith everything you do.’So he stretched his wingsAnd took off from the safety of his tree
And the butterfly finally saw the sea.
Why This Should Be a "Hit Song":
It is a beautifully written metaphor/story song, probably too good for the Billboard charts. It is simultaneously thought-provoking, uplifting and heartbreaking. And how many songs from a Broadway show that ran for just 5 performances have been turned into a children's picture book? Maybe "The Butterfly" is already a "hit" song!
#2514
Posted by JK at 7:00 AM

Labels: 9 to 5: The Musical, Broadway Misfires, Glory Days, The Story of My Life