DON'T FORGET TO COMPLETE ALL 3 PARTS OF THIS WEEK'S "HOT OR NOT" POLL
MOTOWN: THE MUSICAL - THE ENSEMBLE! 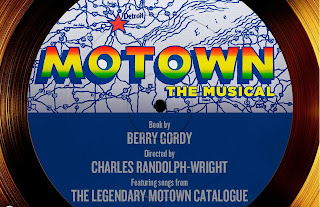 It is very clear from the advertising and logo for Motown: The Musical that producers are looking to people of a certain age to fill up the cavernous Lunt-Fontanne Theatre.  Apparently, given the show's record-setting attendance/grosses for the fitrst two weeks of previews, what they are doing is working.  Very well.  So far be it from me to criticize in a negative way.  Not that I would have, since I love it.

For my parents (they are young for people that have a 46 year old son) that label means even more, as the sound of their generation was, in fact, the Motown Sound.  In the 60's, it was as important a symbol as any freedom march, peace rally or love-in.  They were suburban kids with limited access to African-Americans to say the least.  But music, they say, brings people together.  My parents recall with much happiness going to "integrated dances" and buying ANY record wth the Motown label on it.  Stevie Wonder, The Supremes... they all helped shape the tastes of my parents, and, ultimately, me.

It is more than a little galling that I am part of that "people of a certain age" group, albeit the very tail end of it.  You see, my generation is the last to fully appreciate the idea of vinyl records, where the label on the record meant is much as the songs on the disc.  The Motown label is one that, no matter the artist, you knew was going to be a special record in your collection.  Seeing that label meant quality - talent and sound. One of my all-time favorite albums was "Diana" by Diana Ross.  It came out in - gulp - 1979-80, with two songs that I still turn up every time I hear them on the radio - "Upside Down" and "I'm Coming Out." 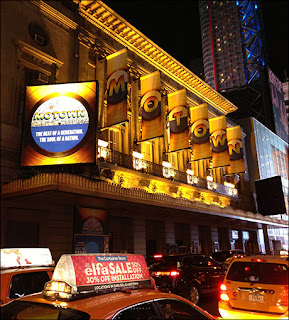 And now, every time I walk by the Lunt-Fontanne, bathed in gold light and covered with that record label logo of theirs, I smile.  And I get very hopeful - that this will be the jukebox/musical bio show that finally pleases me.  (I am no fan of Jersey Boys, Million Dollar Quartet or Baby. It's You!) 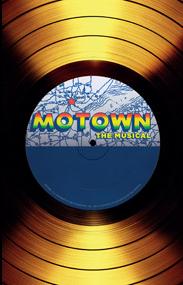 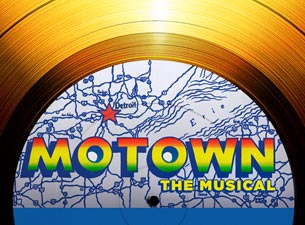 The logo, an exact replica of the old otown label, and the gold-hued vinyl circling out from it, are instant nostalgia.  And the gold tone at once brings to mind the past and gold records, of which Motown had a zillion.  And using the label format allows the show to have an all-purpose logo (much like the Les Miz and Cats logos of yesteryear).  Any information that needs advertising can go right under the title and the logo itself doesn't change.  Brilliant. 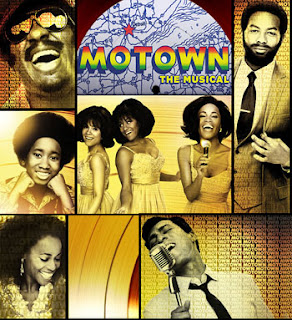 Even their tag lines have the nostalgia factor, especially when paired with the period looking photos of the cast as Michael Jackson, Diana Ross, The Temptations, etc.  Oh, we who know the real thing know they aren't the real real thing.  But they are a close enough simulation to stir all kinds of memories.  And the whole thing, in all of its permutations, looks slick, well-produced, and glamorous.

What more could you want from a show called Motown: The Musical?