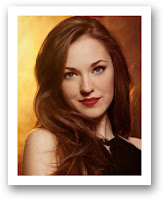 I have to come clean about one facet of Broadway stars that I don't really care for.  The Broadway Star Solo CD.  I know, I know.  It is practically blasphemy to say that, akin to admitting I don't love every single thing Stephen Sondheim ever put to paper, I suppose.  I generally find them to be uninteresting exercises in excess, navel gazing, and artificiality.  Of course, there are exceptions.  Two of them:  Betty Buckley - I have everything she's ever recorded and Patti LuPone - I adore ballsy brilliance.

Make that three.  Imagine my shock when I popped the new solo CD by Laura Osnes: Dream a Little Dream: Live at the Cafe Carlyle, into my car stereo, and found that I liked pretty much everything about it.  Ms. Osnes is every bit the Broadway Diva as Ms. Buckley and Ms. LuPone, but in a completely different way.  The clarity of her powerful, yet gentle voice gives my chills.  And she has a presence that comes through even without any of the visual.  So now there are but three performers whose solo efforts intrigue me and challenge me enough that I look forward to their next stage appearance AND their next solo CD. 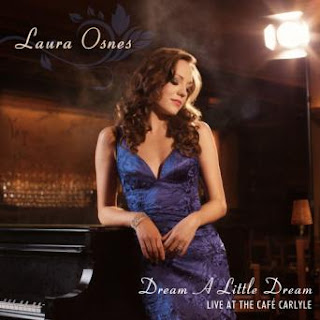 3.  The presentation of the live concert.
I love that Ms. Osnes understands that the patter between numbers is so frequently idiotic at these shows that she giggles when she segues into some of the songs with what has to be purposely awkward lines.  I love that the audience is heard reacting.  Not overreacting.  And I love the quality of the recording - the only thing that betrays the fact that this is a live recording is the applause.  But a lot of credit must also go to the 4 piece band that accompanies this talented lady: Pete Donovan (bass), Matt Copely (guitars), Larry Lelli (drums) and Fred Lossen (musical direction and piano).  They accompany, not overwhelm, and they are completely insync with their vocalist. 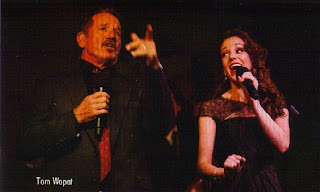 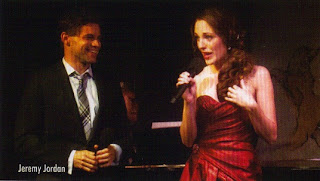 2.  The fun and interesting guests.
Ms. Osnes' choice of guests and the numbers they do are inspired.  How cute is it that she and her husband, Nathan Johnson, recreate the moment they met?  A fine rendition of "A Whole New World" from Disney's Aladdin and a sweet story explain the mechanics of the meeting, but the blend of their voices and clear chemistry explain the connection between the two.  I suppose if Ms. Osnes were an older woman, singing with, say Aaron Tveit, we'd call her a cougar and comment on the sexual fireworks.  The other way around, with the older man being Tom Wopat, and the song being "Baby, It's Cold Outside," it could be creepy.  And yet, somehow, it isn't.  And there is her Bonnie and Clyde co-star, the always awesome Jeremy Jordan, who proves that every second of their palpable chemistry during that musical was honest, as that same chemistry comes blasting through the speakers during their hilarious take on "Anything You Can Do."

1.  Laura Osnes.
I find Ms. Osnes' interpretations to be honest and genuine, free of over-doing it, and her way of making each number her own to be spot on.  She manages to make even the most old-school standard sound both of its period and contemporary.  She does contemporary - the sultry "How 'Bout a Dance?" from Bonnie and Clyde and a bombastic turn with the Frank Wildhorn favorite, "Must Be My Lucky Day."  The mash-up of "Born to Entertain" and "Don't Rain on My Parade" to explain her drive for Broadway is both funny and full of vocal adrenaline.  And her take on The Sound of Music's "I Have Confidence" and The Music Man's "Till There Was You" makes it clear that she's the go-to girl for modern revivals of rusty classics.  I can only imagine what she'd do as Anna in The King and I.  None of the 17 numbers included here are a misfire, and the bonus track, "In My Own Little Corner," makes me actually excited about her upcoming title role in Cinderella.

As one of maybe three reality stars who are worthy of their new celebrity, this recording makes me respect the talents of Laura Osnes even more.  She's the real deal.  I can't wait to see what she does next.

Jeff
4.021
Comments? Questions? @jkstheatrescene (Twitter); jkstheatrescene@yahoo.com (Email); or leave a comment below and check a box!
Posted by JK at 9:00 AM