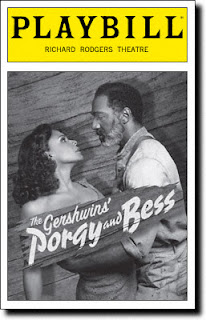 The Gershwins' Porgy and Bess went out with a minor bang, up only 3.9% over the previous week, but it was enough that the show went up an impressive 7 spots on the chart.  But when you consider that only 3 shows posted a gain in attendance this week (An Enemy of the People, Porgy and Bess, Wicked), the latter up less than 1%.  Every other show, except The Book of Mormon, which held steady as the only SRO show, posted losses in attendance.  The biggest drop was Peter and the Starcatcher, with significant drops also posted by Chaplin, Evita, Grace, Mamma Mia!, Spider-Man: Turn Off the Dark, Phantom of the Opera, and War Horse, all of which showed losses of more than 10%.  In terms of cash, the biggest gainer was Grace up nearly a quarter million - this was the first week the show played a full 8 previews, with Evita posting the biggest loss, down just over $129K. The continued success of Rock of Ages continues to astound me, while the loss of B.O. oomph shown by Peter and the Starcatcher saddens me.  The coming week holds no scheduled closings, while Edward Albee's Who's Afraid of Virginia Woolf? will begin previews at the Booth on Thursday.


To see how this chart is calculated, click the "Box Office" tab at the top of the page.

Be sure to come by tomorrow morning, September 26, for details on a contest to win tickets to THE HEIRESS starring Jessica Chastain (The Help), Dan Stevens (PBS's Downton Abbey) and David Straithairn (Good Night and Good Luck).  Be sure to start following me on Twitter to enter (@jkstheatrescene) - check the spelling!