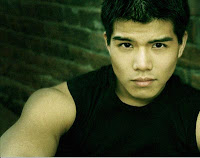 Since part one of this interview posted, Telly Leung has begun previews of the Broadway-bound musical, Allegiance.  In Part I, he discussed that show, as well as his time with the revival of Godspell.  In this part, Mr. Leung talks about his time on Glee, working on the original Broadway production of RENT, as well as working with Neil Patrick Harris on the Hollywood Bowl production.  He also tackles the issue of non-traditional casting, and a few more of your questions.


JEFF: OK, the inevitable Glee question.  The show is so slick and well produced, with epic numbers  and amazing vocals each week.  Can you take us briefly through the rehearsal process – from script to final filming?  I imagine it was grueling!  And how was it to work with Darren Criss and Chris Colfer?  How did you manage to escape the Glee Tour?

TELLY: First of all, from Day One, Darren and Chris were amazing to work with. They are such pros. Shoot days are long and grueling, and I watched those two turn it out take after take. It was really inspiring to watch.


Glee days are LONG. Usually, on a set, you are doing 8 hour days or 10 hour days. On Glee, you’re probably looking at a 12 hour day minimum – and usually, it’s more like 16 hours. Shooting a musical (as the folks on Glee and Smash will tell you) is more complicated than shooting a regular TV drama. You have to get the number from all sides, different angles, crane shots, etc. But, the product is well worth it. It can be a stressful environment sometimes, but in the midst of all that stress and exhaustion comes a loopy sense of fun that I think is also captured on screen. I think it’s that sense of fun that audiences for Glee really latch on to when it comes to the musical numbers. Come on – who doesn’t DREAM of having their life be a musical sometimes?!

As for the Glee tour, they asked me to go on the road – and it was hard to say no. However, I had to chose between Glee tour and hanging with my boys in giant 20k stadiums all over the country – or doing the workshop of Allegiance – and I chose to come home and take the time to really develop Allegiance. I think the choice paid off, cuz now I’m in beautiful San Diego, working on the world premiere of this show!

JEFF:  I have worked with and know several Asian-American actors, who lament the lack of roles and the having to wait for places to do The King and I, Miss Saigon and Flower Drum Song in order to find work.  Has that been an issue for you and your career?  How do you feel about the recent controversy surrounding the casting of The Nightingale?  (I’m playing Devil’s advocate here.)  If people are all for non-traditional casting, why is it “wrong” to cast a Caucasian actor as the Emperor in The Nightingale, but “OK” to cast an Asian-American as German child Wendla in Spring Awakening, for example?  Isn’t non-traditional casting the same both ways?  As someone who has already had quite a career and has seen it from all sides, I’m sure, how do you stand on this issue?

TELLY:  The original intent of non-traditional casting was to give minority actors that do not have a wealth of casting opportunities a chance to work – doing roles that have been traditionally cast as exclusively Caucasian – especially those roles in which race / gender / ethnicity is not germane. I believe in this term and its original intent – which is why I don’t think it really works the other way around. Let’s be real – there are away more opportunities for Caucasian actors. They are the majority. Comparatively, there is very LITTLE work for Asian actors out there – which is why non-traditional casting is important. One day, the situation may be reversed (though highly unlikely). One day, IF there is a minority of Caucasian actors and the majority of actors are (for example) of Asian decent, and the majority of commercial work being produced is cast with only Asian actors – then yes – we will need to make an effort to cast Caucasian actors non-traditionally in roles that are usually cast with Asian actors. But, that’s not the reality – and it’s important to look at the statistics of how many minority actors are actually being considered and hired for projects – especially when the roles aren't race / ethnicity / gender specific.


JEFF: Back to Allegiance and this issue.  Is there any kind of issue taken within the Asian-American acting community when a play about the Japanese internment camps as three leads from three different nationalities – Japanese (George Takei), Chinese (you) and Filipina (Lea Salonga)?

TELLY:  At the moment, there’s no issue – atleast not that I’ve heard of. Quite the opposite. I think the Asian community is actually THRILLED that this story is even being produced on a major level, and featuring so much Asian talent – and I’ve gotten nothing but encouragement and praise from my brothers and sisters in the Asian community for Allegiance. The hope is that Allegiance will benefit the community as a whole. Fingers crossed that it’s a successful run in San Diego, which will lead to a long and successful run in New York. Maybe NY will lead to other productions (West End, a tour) – which means more and more work for Asian actors.

JEFF:  You were also in the closing cast of the Broadway production of RENT.  I’ve seen the DVD preservation of the final performance, and the audience seemed pretty crazy, but totally into it.  What was that whole last week like, performance/audience wise?  While it is great to be a part of such an amazing phenomenon, how was it to come in at the end and close it?  Had you had much experience with the show prior to that?

TELLY:  I saw the original cast of RENT in 1996 when I was in high school, and it totally made me want to do theater. Fast forward 10 years, and I’m standing on that famous line, singing "Seasons of Love" on Broadway. It was a totally full-circle, surreal moment to me. My high school theater dream totally came true. The RENT family is a tight knit group and those final days of RENT was a celebration of 13 years of amazing memories. I feel so honored to be part of a select group of artists that got to work on that show – a show that really changed the way the world thought of music theater. Not only was it an amazing show – it was a cultural phenomenon – and I got to be a part of it. Pinch me!

JEFF: Simple question: What is it like to work with/for Neil Patrick Harris?

TELLY:  Neil is awesome. I was already such a big fan of his acting work, but he’s also a very gifted director. Neil is part of the RENT family. He played Mark in the West Coast premiere – and even though we never worked on RENT together, there is a bond that exists between members of the RENT family. I was so honored when he asked me to play Angel at the Hollywood Bowl. He wanted to add new members to the RENT family (like Vanessa Hudgens and Wayne Brady), but he also wanted to make sure he had some RENT alums (like me) in the mix, especially with a very short, 10-day rehearsal period. It was such a joy, performing that show for 17,000 people a night!

JEFF:  Last question from me!  Given that we “met” on Twitter, I assume that you are pro-social media.  As you see it, what are the pros and cons to websites, Twitter, Facebook, message boards and the like as far as being in the entertainment business?  How important a publicity tool is it?  Does it limit your ability to express your true feelings for fear that you’ll get in trouble with fans, producers, etc?

TELLY:  I love social media. It’s humanly impossible for me to connect to everyone who may have an interest in my work – but social media makes it easier. Theater (and the arts, for that matter) is all about connecting to people. It’s about reminding us of our humanity, and the importance of community. Social Media has only HELPED that. 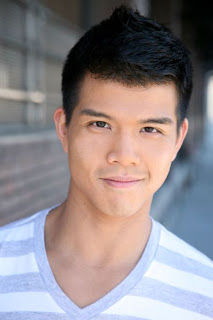 Here are more of YOUR questions for Telly!

1. Which other track would you have liked to play in Godspell?

TELLY: Uzo and I joke about this. We’ve always wanted to switch roles! I’d kill to sing "By My Side."

2. If you weren’t a performer what would like to do as a career?

TELLY:  Either a translator at the UN (I love languages) or a teacher. I think I still may end up teaching – when I’m done acting. I really love it.

3. If you could live any other time in history but right now what would it be and why?

TELLY: NEW YORK…. All the way. LA is a great place to work, but NY is where my heart is.

Thanks for your time, Telly!  It was great getting to know you a little better!


(Photos courtesy of Telly Leung.  Visit tellyonline.net for more on Telly.  Also, visit allegiancemusical.com for more on the show.)

4.014
Comments? Questions? @jkstheatrescene (Twitter); jkstheatrescene@yahoo.com (Email); or leave a comment below and check a box!
Posted by JK at 12:01 PM