CONTEST: WIN tickets to WHO'S AFRAID OF VIRGINIA WOOLF? 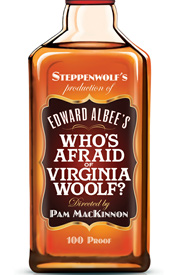 THIS CONTEST IS OVER AND THE WINNER HAS BEEN SELECTED!  THANK YOU TO ALL WHO ENTERED!  THE ANSWERS TO THE QUESTIONS ARE HIGHLIGHTED BELOW.

As the fall season gets into full gear, it's CONTEST time again, readers!  I'm pleased to share that I have several ticket, CD and other show-related giveaways lined up over the coming weeks.

First up, is the already acclaimed 50th Anniversary Production of Edward Albee's Who's Afraid of Virginia Woolf? presented by the Steppenwolf Theatre Company.


Tony Award® and Pulitzer Prize winner TRACY LETTS (August: Osage County) and Tony® nominee AMY MORTON (August: Osage County) team up as America's infamous sparring couple, George and Martha, in Steppenwolf's production of EDWARD ALBEE'S WHO'S AFRAID OF VIRGINIA WOOLF? Be there when this explosive masterpiece of marital combat—directed by Tony® nominee PAM MACKINNON (Clybourne Park)—makes history on Broadway this fall just as it first did exactly 50 years ago.


The voucher is good through November 4, 2012, for the following performances ONLY:

Answer the following 3 questions.  Put the answers (Letter AND Answer, Ex. B. Angela Lansbury) in an email with WOOLF CONTEST in the subject heading and send it to jkstheatrescene@yahoo.com.  Include your name and location.  Entries will be accepted until NOON, on Saturday, September 22.  One entry per email address.  Duplicates will be disqualified.

1.  Edward Albee won the Pulitzer Prize for all of the following plays, EXCEPT:
a.  Who's Afraid of Virginia Woolf?
b.  A Delicate Balance
c.  Seascape
d.  Three Tall Women

2.  Tracy Letts wrote all of the following plays, EXCEPT:
a.  August: Osage County
b.  Killer Joe
c.  Jesus Hopped the "A" Train
d.  Superior Donuts

3.  All of the following actresses have played Martha in Who's Afraid of Virginia Woolf? on Broadway, EXCEPT:
a.  Uta Hagen
b.  Colleen Dewhurst
c.  Elizabeth Taylor - She was in the film version, not on Broadway!
d.  Kathleen Turner

DON'T WANT TO TAKE YOUR CHANCES?  HERE'S A DISCOUNT FOR YOU!
Click HERE and SAVE!