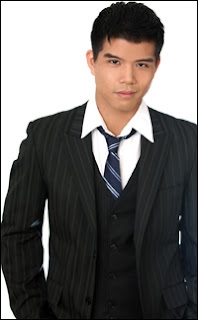 He's a winning combination: talented in a variety of ways, with an always surprising depth, plus dashing good looks and that undefinable "it" thing.  He does it all - solo shows, ensemble acting, and dramatic turns in lead and supporting roles.  You've probably seen him as a Dalton Academy Warbler on Glee, or maybe you caught him in the final Broadway Company (and the DVD) of RENT, or as Angel in the same show at the Hollywood Bowl.  Maybe it was on Broadway recently as the "All Good Gifts" track in the revival of Godspell.  I'm speaking, of course, of Telly Leung, who recently took time out of his busy schedule to answer a full dozen of my questions and 10 of yours!

In this first of two parts of his interview, Telly talks about that VERY busy schedule, opening a new one-man show, opening a star-studded Broadway-bound brand new musical (Allegiance), and the ups and downs of Godspell.


JEFF: So, in the midst of rehearsals for Allegiance, you are preparing a concert!  Do you always do this kind of heavy-duty multi-tasking?  What goes into creating this kind of evening?  What can audiences expect to see when they go?  Do you think you’ll do the same show in NYC?

TELLY: HAHA! I often get made fun of by my friends and family for my mutli-tasking. I’m never just doing one thing. It ends up being somewhat stressful –but at the end of the day, very fulfilling. I think all of my different projects inspire me differently – and fulfill a different passion of mine. For example, I love acting and becoming someone else. I like the distance I get from playing big houses (like The Hollywood Bowl, or a Broadway theater). But, I also love performing in an intimate cabaret setting – and NOT “acting.” There’s no character to hide behind. I’m just “Telly… as TELLY” sharing my own stories and songs that resonate with me personally. My new one-man show is called Playlist, and it’s based on the idea that we are all defined by our music collection. You could be a total stranger to me, but if I picked up your ipod and put it on random shuffle, I’d learn a lot about you from your taste in music. It’s a fun night of songs (and personal anecdotes that go along with the songs) and I love that at the end of the night, they audience has really gotten to know me – Telly, the person – and not just Telly, the actor, playing a part. I performed a version of Playlist at Birdland this last spring. I am taking a refined version of the show to San Diego’s Diversionary Theatre (Oct. 8) and also Hollywood’s The Coterie (Nov. 9 and 10). I am releasing an album on the Yellow Sound label (featuring many songs from Playlist – and other one-man shows I’ve done) and the album will be officially released on Dec. 4 (Amazon, itunes, etc) – with a CD-release gig sometime in December right before the album drops officially.  I can’t officially announce the CD release show – but it will be in NY (in a venue I’m so excited to play), featuring a full trio and a string quartet, and it will be BIG. Stay tuned for venue and date / time info!

If folks want to hear the CD earlier, I will be selling advanced copies exclusively at the Old Globe gift shop during the run of Allegiance, and I will also make them available at the my cabaret gigs (Diversionary in San Diego on 10/8, and The Coterie in Hollywood on 11/9 and 10).

JEFF: I read about Allegiance on the Old Globe website.  It sounds epic, yet personal, bold and emotional.  What can you tell us about the show and your role in it?  Over the years of development, you’ve been involved in it quite a bit – has the evolving of the show been difficult or challenging?

TELLY: I’ve been attached to Allegiance (in various developmental workshops and readings) for the last two years, and it’s such an amazing feeling to FINALLY show a paying audience what we’ve been working on for all these years. I play Sammy – a young, patriotic Japanese-American boy who finds himself torn between his allegiance to his family and his country in the midst of the Japanese internment during World War 2 after the bombing of Pearl Harbor. The show has changed so much over the years – songs cut, lines re-written, character intentions revised – and it’s always a challenge to make changes to the show - but it’s always for the better – so the challenge is well worth it. What audiences will see in San Diego this upcoming fall is a result of years of revision. 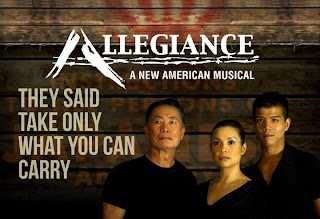 JEFF: It looks like, as a young actor, you’ve really hit the “co-star” jackpot!  I mean your name is right up there with Tony-winner Lea Salonga and TV legend George Takei.  Is that kind of star power daunting in rehearsals?  How have rehearsals been in the collaborative sense?

TELLY: You would think it would be daunting – but those two are class acts! They are incredibly gracious, generous, and approachable. First of all, Lea is a dear friend. She’s always been a big sister to me, ever since I made my Broadway debut in Flower Drum Song. It’s sort of ironic that now, in Allegiance, she’s actually playing my sister! George is also such a pleasure to be with on and off the stage. After years of working on this show, we are family – and it’s not daunting at all.

JEFF: Flower Drum Song… What a way to start!  What do you remember of the whole experience?  Was it everything you dreamed it would be?  That revival had a bit of a rocky run, too.  Is it difficult to deal with a troubled show?  Were you too “new” to get what was going on critically?

TELLY: Flower Drum Song had a very rocky run. So sad it didn’t run longer – because it was a beautiful show that our audiences really loved. There were terrible blizzards that year that was very bad for business on Broadway. Also, the musicians’ strike really hurt our show as well. . It was hard to be in a show that struggled to stay open – especially when we were across the street from a mammoth hit (Hairspray, at the Neil Simon Theater). But, I learned a lot from doing that show in the 4 short months that we ran on Broadway – and I owe a lot of that to my cast mates (like Lea) that took me under their wing and taught me the ropes. That show was such a family – and I’m still very close with my Flower Drum cast mates today, 10 years later! 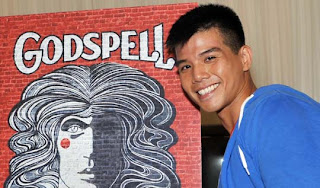 JEFF: Let’s talk Godspell.  Are you surprised (I was) at the practical dismissal of the show by the awards committees and many of the critics?  I saw the show and the audience seemed REALLY into it.  Was that generally the reaction by audiences?  How about on nights when the seats weren’t too full?  I know it is your job to give 100% no matter what, but did lack of audience, and overall failure at the box office, take its toll on you and the rest of the cast?

TELLY: Godspell was a very interactive show, and because we interact with the audience so much and the audience is always different every night, of course the smaller houses affect the way we do the show. But, we never gave less. If anything, we had to overcompensate, and make sure we gave an extra special show to those folks who DID make the effort to come to the show.  I loved Godspell, and I could see, for myself, how much our audiences loved the show, too. Godspell is all about love and joy – and there was a noticeable difference in the audience by the time they left the theater. They left the theater lighter and happier. It would have been nice to have been recognized by the awards, but at the end of the day, it doesn’t matter. We did our jobs. We spread joy. 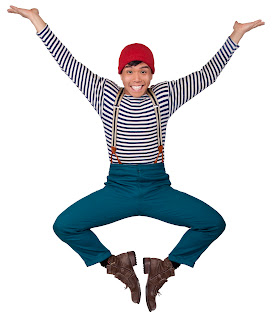 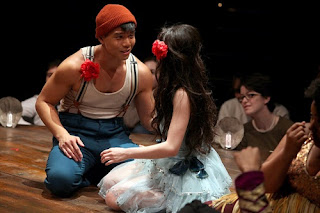 JEFF: I was amazed at the strength of the cast in terms of unity and improvisation.  It seems like it would be really easy for egos to get in the way, but that doesn’t seem to be the case with Godspell.  How did the director, Daniel Goldstein, create an atmosphere in rehearsals that fostered that unity and lack of ego?  How did all of you maintain it?

TELLY: I worked with Danny (and fellow cast mate, Uzo Aduba) on the Paper Mill production of Godspell in 2006, so I knew what I was getting myself into. Improvisation is a BIG part of how Godspell should be performed. It should be contemporary. It should be relevant. It should be topical. That means, the show should be a living, breathing organism every night – and I think we accomplished that. You’re right – in a highly creative and improvisational environment like that, there’s no room for ego – and I think Danny was very careful in his casting of the show. He found 10 of the most generous, giving, selfless energies on stage who also had unique gifts that made them unique story tellers. He and [Stephen] Schwartz will tell you what a long and difficult casting process it was – but all that hard work was worth it. It was a perfect ensemble.

Here are a few of YOUR questions for Telly:

TELLY: Anything that won’t give me acid reflux before I sing! Anything light. I usually eat after a show. Not healthy – but as a show person – what can ya’ do?!

3. If you were asked to voice an M & M which one would you want to be and why?

5. Role you’d like to play if you were female?

CLICK HERE for Part 2 of this interview.  Telly talks about RENT , working with Neil Patrick Harris, non-traditional casting, and being on Glee.

(Photos courtesy of Telly Leung.  Visit tellyonline.net for more on Telly.  Also, visit allegiancemusical.com for more on the show.)

4.007
Comments? Questions? @jkstheatrescene (Twitter); jkstheatrescene@yahoo.com (Email); or leave a comment below and check a box!
Posted by JK at 12:00 PM