FACE OF THE FUTURE: Elizabeth A. Davis 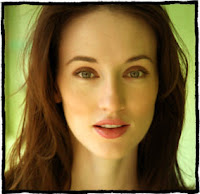 She sings, she dances, she plays a mean violin.  Often, at Once at least, she does all three at the same time.  And, of course, she acts.  In Once, she is a friend and a seductress.  And she is really, really good at all of it.  Not only does she manage to blend into Broadway's best ensemble, she also manages to make an individual impression.  So much so that Elizabeth A. Davis earned a 2012 Tony nomination for Best Featured Actress in a Musical.

Something tells me that will not be the first and last we've heard of this Broadway debutante.  She is definitely a face of the future!

Labels: Elizabeth A Davis, Face of the Future, Once