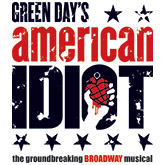 Sitting in the Merriam Theater in Philadelphia with the huge and enthusiastic crowd at American Idiot reminded me quite a bit of the first time I sat in an audience waiting for the same show to start.  Back then, it was an early preview, and the amazing Green Day fans were there to see what it was all about.  The vibe in Philly was pretty much the same.  So, in many ways, was the show.  The pendulum of this show's history has definitely swung back to the show's first days, when the Original Broadway Cast was struggling to find a unified voice for the show.  That early performance was at times overwrought with twenty-something angst and a feeling of rebellion that was so overdone in spots that any sense of real emotion was gone and the show threatened to become a parody of the very disenfranchised population it sought to immortalize.  So, too, are parts of this production - over-hyper, over-"angsty," over-angry, all bordering way over-done.

It is not anything to do with production values - the Christine Jones set, the Kevin Adams lighting, Darrel Maloney video projections, and Andrea Lauer costumes - are all in tact from the First National Tour.  (Brian Ronan's sound design is, unfortunately, all but obliterated by the over-loud volume.  I've heard quieter rock concerts.)  And the production itself is still directed by Michael Mayer, choreographed by Steven Hoggett, and musically arranged by Tom Kitt.  (The band, lead by Evan Jay Newman, is amazing.)  Of course, how often can one say that the second, and non-Equity at that, tour is also the Original London Cast of the show? The leads are mostly top notch (none are completely bad, either), in some cases as good as their original and first tour counterparts, and in a couple cases, even better.


The only time the show feels like we aren't in the presence of seasoned professionals is when the ensemble is doing their thing.  In EXTREMES.  ("American Idiot," the entire "Jesus of Suburbia" sequence, and "Holiday" all suffer - not a great way to start the show.) Someone from the production team needs to revisit the tour and take them all down a notch or two.  Overacting in the ensemble has gone unchecked - hard to imagine, but it is true, the choreography can be overdone.  And the smaller parts can, too. Case in point, the actor in the Theo Stockman track) managed, incredibly, to nearly bring down "Holiday," with the "Zieg Heil"(sic) section so overplayed that it isn't creepy or meaningful, it is laughable.  The young actor similarly overplays the "other boyfriend" part later in "Too Much Too Soon," so much so that Will may as well be taking a break offstage.  I bring him up individually mostly because his track is more memorable than others, but nearly all of the ensemble is equally guilty of scenery chewing.

The leads fare much better, the lone exception being Trent Saunders, whose St. Jimmy is so one note that he ends up being a bland blur.  Even when he was the complete focus, I found myself looking elsewhere; this is not a good thing considering how pivotal the role is. Hunky Jared Young does well by "Favorite Son" - his back up girls were great in that scene as well.


Of the three central couples, least impressive was Will and Heather (Casey O'Farrell and Kennedy Caughell) though some of it probably has to do with their roles being the most under-written.  O'Farrell has a truly lovely voice, much better suited to more traditional musical theatre than Idiot.  But he also lacks even the low key charisma needed to make the resident couch potato interesting.  Ms. Caughell, as a result, comes across as more shrill nag than fed-up social climber.  That said, neither actor is really bad, but I've seen better.  I doubt anyone new to the show would even notice anything I took issue with.


The pair with the most emotional (and I think best written roles) impact is Tunny and Extraordinary Girl, and in those roles, Thomas Hettrick and Jenna Rubaii are superb.  I will even go so far as to say Mr. Hettrick is my favorite Tunny to date - no small accomplishment considering how much I loved Stark Sands in the role.  Even from the mezzanine (a fair distance) one can sense his anger and loss of direction, and later, his resignation to his fate, his physical pain and even his pride in country.  His voice is a perfect fit for the Green Day style AND the acting required to make the piece work as theatre.  Ms. Rubaii is instantly enchanting as Extraordinary Girl and later as Tunny's nurse.  There is more than a little sexual tension between them, and their feelings for each other wordlessly plays all the way up to the 3rd balcony.  I was struck once again by how artistically rendered Tunny's entire story line is.  The songs, the choreography, the visual imagery and these actors combine in such a way that one could make a case for Tunny being the lead/central story.


Chemistry also helps elevate the central characters, Johnny (Alex Nee) and Whatshername (Alyssa DiPalma) here.  Mr. Nee has the unenviable task of taking over the role from two Broadway favorites.  Interestingly, he seems to have taken from both, channeling John Gallagher Jr.'s quirky, hyper insecurities and Van Hughes' outward bravado and underlying anger.  He sings the role well, and he is convincing in portraying Johnny's journey of self-discovery and his despair and disillusionment is palpable.  Ms. DiPalma possesses a terrific voice and a sexy, exotic quality that makes her Whatshername both alluring and enigmatic - and perfect for the role.  When she and Mr. Nee are together, the sparks fly - you can see why she changes his life, and her "Letterbomb" is, well, explosive.

Much like the Non-Equity tour of Spring Awakening I saw a few years ago, this American Idiot makes the argument against such productions difficult to support.  These shows were both professional quality (the overplaying of the ensemble notwithstanding).  That said, both captured a youthful exuberance commensurate with the youth of their casts.  American Idiot remains vital, important, and in very good hands.  Don't let the "Non-Equity" label keep you away.  If you have to, say you are seeing the Original London Cast!