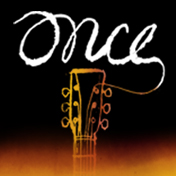 PREFACE: As I was writing this very blog, it was announced that the cast recording of Once won the Grammy Award for Best Musical Theatre Album.  Way to go!

I don't know how much contemporary music all of you listen to, so I might be a little out of my mind here.  BUT I've noticed (have you?) that there are several songs on the the charts today that sound like they could easily fit into the Tony-winning Best Musical, Once.

Maybe it's the driving, almost primal deep beat?  Is it the strings that carry the melody?  Or the clear piano?  Or is it the accordion-like sounds?  Perhaps it is all of these.

This song, "Little Talks" by Of Monsters and Men, is kinda creepy lyrics-wise, but can't you picture a folk tale flashback while Guy and Girl get cozy on the rocks overlooking the town? She gets scared; he comforts her...


I nominate American Idol's Phillip Phillips to either replace Steve Kazee or play Guy in the National Tour.  His song "Home," sounds like it would fit into the show nicely, too.  Maybe Guy and his Da are reminiscing...


Once could use another exhilarating group number, and what better one than "Carry On" by Fun?  When it goes into full swing, can't you just picture Ann Nathan  and Elizabeth A. Davis roaming the stage and jamming together center stage as the song reaches its apex?  It would work so great after the second "Falling Slowly" - rousing AND tearful.  (There is also an acoustic version, perfect for Guy and Girl to get us to serious weeping!)

And finally, this catchy tune, "Ho Hey" by The Lumineers, would fit as part of the pre-show, part of the story, or as a fun curtain call encore.  It is so Once it is almost scary!

So, now that this sound is clearly popular and growing, why haven't the powers the be released a Broadway Cast Recording single of "Gold"?  Surely, that would make a dent in the Top 40, right?