CONTEST: Win tickets to see Broadway's ROMEO and JULIET at a Movie Theater Near You! 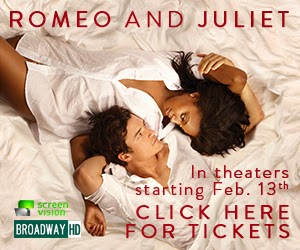 THIS CONTEST HAS ENDED.  THANKS TO ALL OF YOU WHO ENTERED.  THE TRIVIA ANSWERS ARE HIGHLIGHTED BELOW.

Broadway fans around the country lately have been able to see theatre performances from the comfort and convenience (not to mention pretty cheaply) of their local cineplex.  From Love Never Dies to Merrily We Roll Along, plus a wide selection of things from the National Theatre of Great Britain,  movie theaters all across the country are bringing the thrill of live theatre performances to avid fans and those who can't get to New York.

And now comes Romeo and Juliet  starring Orlando Bloom (Lord of the Rings, Pirates of the Caribbean) as Romeo and Condola Rashad (Smash, Sex and the City 2) as Juliet, will be opening at a movie theatre near you this Valentine’s Day! The film has an exclusive run in movie theaters from February 13-19.  And I have a pair of tickets to a screening for you to win!

While Romeo and Juliet is the most famous love story of all time, this production marked the first time in 36 years that the play was produced on Broadway.  For more information on the screening, including social networks and link to the film trailer, scroll down past the contest.

THE CONTEST
1.  The song "(You Gotta Have) Heart" comes from which Broadway Musical.

A. Kiss Me, Kate
B. Kiss of the Spider Woman
C. Damn Yankees
D. A Gentleman's Guide to Love and Murder

3.  Twyla Tharp choreographed a dance to the Frank Sinatra version of "My Funny Valentine" in which Broadway musical?:
A. Come Fly Away
B. Movin' Out
C. The Times They Are A-Changin'
D. Singing in the Rain