CD REVIEW: Bebe Neuwirth Live at 54 Below: Stories... In NYC

When I think of Bebe Neuwirth, I think of a dancing actress.  The woman has moves and a way with a line and a character that can be a powerful combination.  I think about the first time I saw her live - in Sweet Charity, and marveled at how damn funny this very pale twig of a thing was, and how perfectly she executed Bob Fosse's joint-specific choreography. In the years between then and the next Tony-winning role I watched her glide through, it was Bebe on TV and at the movies.  Then it was her cold as ice and smooth as silk Velma Kelly in Chicago that wowed me.

I love her work, truly I do.  But it is funny.  Even though I've seen her in three musicals, I always think dancer-actress.  Never singer.  Oh, it isn't that she can't carry a tune - she's a good, reliable singer.  But it isn't what makes her dynamic to me. And as I sat listening to her new CD, Stories...in NYC, it hit me.  She is Broadway old-school: she actually remains in character and cares more about the story that character is going through than holding a note or going all Idina-Kristin-Kelli on a song.  And that is not a bad thing; and it suits this CD perfectly. 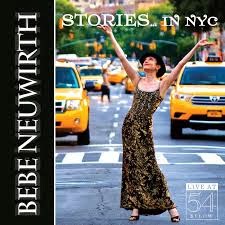 
THINGS TO ENJOY ABOUT STORIES... IN NYC

1.  The package fits the gift: With her brief notes explaining how this CD is the result of years trying out several versions of her act as a starting point, the booklet also contains some really cool photos of Ms. Neuwirth at all ages and at various stages in her career.  And the new photos reveal both sides of this classy, funny lady - on the cover, an evening gown and Fosse bowler in the middle of a busy Manhattan street, and tipping her hat to a street horse; inside, what I imagine the "real Bebe" is: jeans, leather jacket and tee shirt, hair down and smiling.  Normally, this would be a nice extra.  But here, minus the visual of this actress who sings, it all provides a nice context for the evening we are listening to. 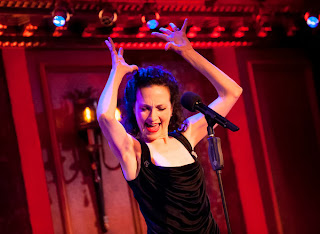 2. Heartfelt, sincere and amusing patter: Since this is a compilation of "story songs," some explanations and personal stories are a natural fit.  Despite the fact that this act has been done many times, her personal stories - with a lovely warmth and affection - and background tales come across as unrehearsed and almost off the cuff.  Again, this totally fits the show and the performer.

3. A nice variety of material: Even though there are many standards - there are even songs on her CD that can be found on others in the same series - her take on them is easy, familiar and still "Bebe-specific." There are pairs of songs by Kander and Ebb, Tom Waits and Irving Berlin, and there are several from the Kurt Weill canon.  She starts the evening with a zesty "I Love a Piano," and ends with a sweet "I'll Be Seeing You."  Highlights in between include a very funny "Ring Them Bells," a moving (considering Neuwirth's background as a dancer) "Mr. Bojangles," and a fierce "But the World Goes 'Round."

I suspect that I'd enjoy this highly enjoyable set even more had I seen it in person.  But even still, I, and you, will enjoy this evening with the intriguing Bebe Neuwirth.