I came across Camp by way of a friend who was thumbing through my La Cage aux Folles Playbill.  "That's the kid from Camp!" she exclaimed.  Never having seen the film (apparently I lose my "gay card" and my "theatre snob card" for this), I had no idea she was talking about Robin De Jesus.  Discussion ensued, and I mentioned that Anna Kendrick is also someone of import (Tony nominee - High Society, Oscar nominee - Up in the Air and co-star in the Twilight films - she plays Bella's non-vampire BFF), not to mention Sasha Allen (Hair), and in smaller roles, Tracee Beazer (Memphis, Hairspray) and DeQuina Moore (Legally Blonde, Little Shop of Horrors).  Further inspection of the movie on http://www.imdb.com/ got me even more surprises - Todd Graff, star of Baby, wrote, produced and directed the film, Jerry Mitchell co-choreographed it, and none other that Stephen Sondheim appears in a cameo role.  No wonder my "cards" were called into question!

And so I watched the movie - twice.  And here are my thoughts. 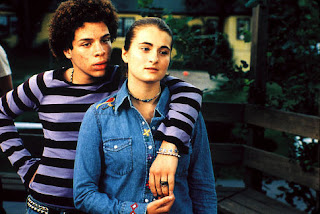 Robin De Jesus and Joanna Chilcoat
It is the rare film or show that manages to hit all of the prudent stereotypes, warts and all, and manages not to annoy me.  Instead, because even though they each wear their hearts on their sleeves these stereotypical teens do so with a disarming sincerity that make it for them (and us) just a little more "real" than we'd like to admit.  Stereotypes are just that because they actually exist.  And every single "theatre geek" stereotype is here: the gay kid comfortable with his sexuality (Spitzer - Vince Rimoldi), the gay kid/drag queen who thinks he's OK with it, but struggles to find himself and fit into his family (Michael - Robin De Jesus), the Black kid with talent to spare, but not too comfortable in his atypical skin (Shaun - Steven Cutts), and his tag along little brother (Petie - Kahiry Bess), and the self-aware, hyper sexual straight kid with talent and looks to get him any girl or guy he wants (Vlad - Daniel Letterle).  Then there are the girls:  the giant ego with marginal talent (Jill - Alana Allen), her annoying sidekick/slave/Eve Harrington wannabe (Fritzi - Anna Kendrick), the ultra sassy black girl who has everything it takes and knows it without being a monster (Dee - Sasha Allen), the overweight girl with a golden voice and a platinum heart (Jenna - Tiffany Taylor) and, of course, the plain Jane girl with enough ability to be a huge star, but with the self-worth of a used tissue (Ellen - Joanna Chilcoat). 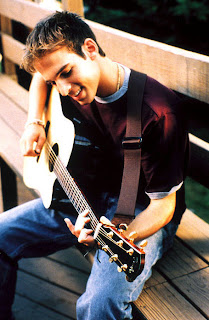 Daniel Letterle
With the setting of Summer Theatre Camp - Camp Ovation - these stereotypes interact.  A love triangle between the straight kid, the plain Jane and the drag queen, the "star" and her "protege" duke it out by sabotaging each other for lead roles, the chubby girl literally has to break the ties the bind to be heard and loved, the black kid laments that there is a dearth of roles for African-Americans, while the little brother becomes an unlikely tap dancing phenom, while the rest of the cast weaves in and out of each story adding a bit of sass, hero worship and some pretty nifty dance moves.  In short, I can see now why the kids at my school shied away from us.  In small groups we are loud, gregarious, and bizarre; en mass, we are unbearable!  Still the movie finds gentle ways to tease its own - a picture of Stephen Sondheim is mistaken as another boy's dad by the un-theatre straight kid; the entire bus of campers sings "Losing My Mind" on the way to the camp; gay pride flags adorn the walls. 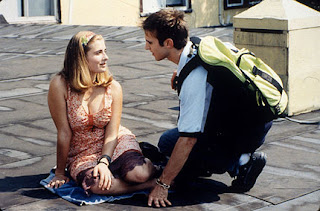 Joanna Chilcoat and Daniel Letterle
Then there are the production numbers, naturally.  After all, the kids produce new sets of shows every two weeks, plus a blow out benefit at season's end.  As a result, we get "Turkey Lurkey Time" from Promises, Promises, lovingly reproduced from the original, a truly amazing version of "The Ladies Who Lunch" from Company, "I'm Still Here" from Follies, and my favorite, the Dreamgirls sequence, added to the camp season in response to the kids' complaint that there aren't enough roles for African-Americans.  The scene is "I'm Telling You I'm Not Going" with Sasha Allen, DeQuina Moore and Tracee Beazer dressed as the Dreams, while lily white Joanna Chilcoat, the only kid at camp that can handle the song, dons a huge 60s black wig and belts the number to 6 year old Kahiry Bess, dressed as Curtis Taylor, Jr.!  What makes it so great is that they play it straight and ultra-seriously, AND that Chilcoat sings the hell out of the song. 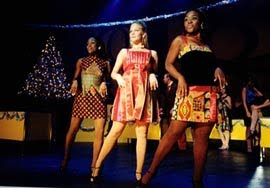 "Turkey Lurkey Time" with
Tracee Beazer, Alana Allen and DaQuina Moore
Each of the actors has moments to shine, and they do.  Their innate awkwardness - they are age appropriate - makes them sweet, their talents make them awesome.  The two main actors, Joann Chilcoat - she hits every moment perfectly, and Daniel Letterle - he exudes an intelligent self-awareness and a blinding sexiness for an 18 year old, haven't been seen much since this film, and that is a shame.  I would have bet they'd have great careers.  But it is great to see how far so many of them have come, especially the Broadway babies.  Sasha Allen owns the entire opening sequence, belting the hell out of "How Shall I See You Through These Tears?" from the short-lived Broadway musical The Gospel at Colonus.  And how is Robin De Jesus, the one that got me to watch this in the first place?  He is utterly charming, sweet and affecting.  And to watch his comfort and glee in the closing number in full drag is to see exactly what is missing in his act one performance in the La Cage aux Folles revival.  Still, he is now nominated a second time for a Tony.  Who am I to quibble?

So, Camp is a romp for theatre lovers - the "show" scenes will tickle you; it is a trip down memory lane for every serious (and weren't we all?) high school actor.  Had it been a tad deeper and probing, the adult in me would be raving about it.  But I'm thrilled that as stereotype full as it is, it manages not to be insulting or condescending.  And that's probably because Mr. Graff lived this summer himself years ago.