To Tour or Not To Tour: That is the Tony Question!

THIS BLOG ENTRY HAS BEEN EDITED AFTER ITS INITIAL POSTING.  SEE COMMENTS SECTION BELOW.

What follows is a bit of a rant, a bunch of conjecture, and a few sour grapes. Almost none of it can be verified, but I am pretty sure it is accurate, if not in detail then in spirit. 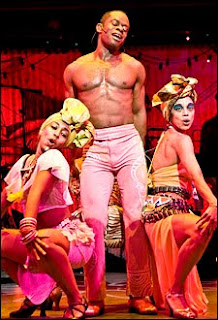 Tony nominated and tour-ready Fela!
The Tony Awards, as we know, have the potential to generate a lot of business for a season’s plays and musicals. And that is mainly because they get national exposure. So audiences that can’t get to New York, and may not even have heard of a certain title, can recognize guaranteed quality if the ads read “Winner! 2010 Tony Award!” And because everyone knows the Tonys are fair and really reward the very best talent and productions on Broadway. Right? Ummm…

Well, that may be the case in the acting categories (if you believe that no lobbying goes on there) because the actors in a Broadway production will eventually leave, get replaced, and rarely end up on the national tour. LA maybe, but beyond that, rarely do the folks in Des Moines get to see the big names.

But you’d have to live under a rock not to know that major lobbying goes on for productions to be nominated, and then voted upon in numbers strong enough to win. They put the kibosh on major swag several years ago, when huge dinners and expensive gifts were sent out. Now, I believe, productions are limited to cast recordings, press kits and photos and souvenir programs. And lobbying still continues.

The biggest thing, though, is that the majority of Tony voters are tour producers and the like, who have a vested interest in which shows they think will play well in the middle of the country. Just ask Urinetown: The Musical – winner of best book, score and direction, yet somehow was not best musical. 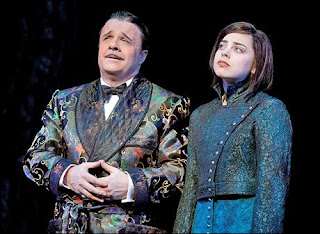 "Ah, Wednesday!  The critics hate us, the Tonys ignored us!
I love being an Addams, don't you?"
With today’s announcement by the previously un-headline maker, laying low Fela!, that it would in fact be touring, it has likely sealed its fate as Best Musical of 2010. Whether or not it deserves it is immaterial. Its biggest competition is probably Memphis, which announced its intentions to tour months ago, back before it mattered. Just before the nominations were announced, the critically raped The Addams Family threw its touring hat in the ring. Not that it needed to…it will sell coast to coast, but announced nonetheless in hopes that it might tip the scales for that 4th spot. Holy Julie Andrews, it went to the ridiculous Million Dollar Quartet, anyway!

Why am I so pumped up about this? Well, I remember two incidences in recent memory, aside from the obvious Urinetown/Millie debacle that have to do with the Tonys and touring. 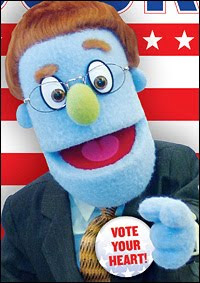 "Vote Your Heart" won us the Tony!
Back in 2003, Avenue Q lobbied hard for its Tony for Best Musical. It made headlines for throwing “campaign parties” with guest lists heavy on touring management and the like. What tipped the scales? A promise that Avenue Q would indeed tour the country. The award was won, and then the tour plans were promptly cancelled – a Vegas run would be cheaper instead. (As it turned out, AQ flopped in Vegas and toured, anyway.) To that I cry "foul!"  Of course, Wicked, like The Addams Family, didn’t really need the Tony… business is still booming over at the Gershwin and nation-wide. (For the record, I think the Tony went to the right show that year.) 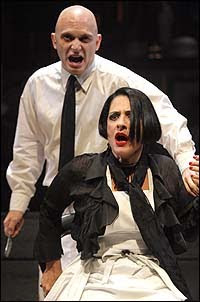 "Oh! Mr. Todd!  We got gypped!"
Then there was the one that really irked (still irks) the hell out of me. In 2006, Roundabout Theatre Company produced the revival of The Pajama Game starring Harry Connick, Jr. and Kelli O’Hara. That same season, the critically acclaimed John Doyle –Patti LuPone-Michael Cerveris revival of Sweeney Todd opened to rapturous reviews. The show re-imagined completely, the performances stellar, etc. etc. When both were nominated for Best Revival of a Musical, the press, the pundits and the websites were overrun with competitive articles - traditional versus avant-garde, both with respect to Pajama Game vs. Sweeney Todd and Original Sweeney Todd vs Revival Sweeney Todd. They were, by all conjecture, neck and neck. Then just when the voters started seeing the shows to vote on them, Pajama Game announced a national tour. The voters voted and artistic achievement lost to possible cha-ching. The producers got their beloved Tony, the show closed less than 3 weeks after the awards, and cancelled its tour. Sweeney ran almost a year and had a national tour. But it deserved the Tony.

My advice to the American Idiot camp: announce a tour, and if you can afford it after, have it. If not, you still might up your chances for being taken seriously.

And does anyone really think Time Stands Still will re-open if it loses the Tony award for Best Play?

It would just be nice to know, for sure, that whatever show is named Best Musical of 2010, really deserves it.  If it really is Fela!, great.  If it is Memphis, great.  American Idiot, no problem.  Million Dollar Quartet?  I want a public counting of the votes!

Comments? Leave one here or email me at jkstheatrescene@yahoo.com.
Jeff
Posted by JK at 3:15 PM