A Weekend in the City, Saturday Night/Sunday Afternoon

After futzing around the hotel room for a bit and a quick change of clothes - and a hearty discussion about the show we just saw, we were off to dinner, neither one of us looking for a huge meal, so we went to the Cafe Edison, home of cheap, good food and fast humorous service. Then, we browsed the other Broadway gift shops, the famous One Shubert Alley, and sister store Theatre Circle. Doesn't everyone go to all three even though they all sell the same thing? I do. It's all about ambiance, differences in current stock and being pushed and shoved by fellow theatre fans all on the same search - merchandise they haven't seen before! (I'll be honest. Except for stuff you can't buy directly at the theatre, I rarely buy anything at these places because the merch at the theatre is always cheaper. My purchases are usually limited to my photo card collection and "New York" gifts for friends. SIDE BAR: Do your friends ask you, like mine do me, for I Love NY t-shirts?) 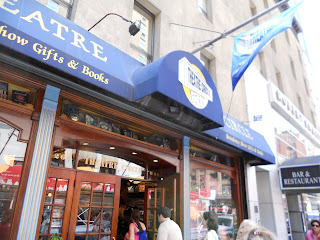 Theatre Circle:  Best for T-Shirt selection and play scripts.
44th Street, next to John's Pizzeria, across from Phantom 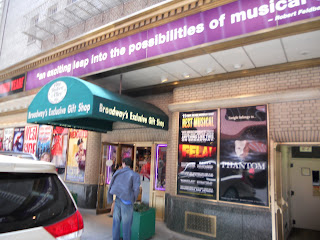 The dinky One Shubert Alley, the first and most nostalgic theatre gift shop.
Between Memphis and next to normal.  Best selection of theatre cards!
Time's up!  We are off to the show I am most curious about, The Addams Family!  Is it as bad as the critics (and the folks who buy everything Ben Brantley says, hook, line and sinker) say it is?  My review will post on Thursday, June 3rd!  We marvel at how long the line is and how efficiently we are taken to our seats.  The place is a mob scene, and the excitement in the air is palpable.  The last time I felt this much expectation in the air was the third performance of the original Les Miserables.  But, is it good?  We'll see. 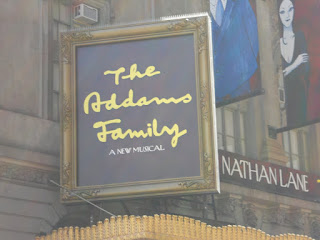 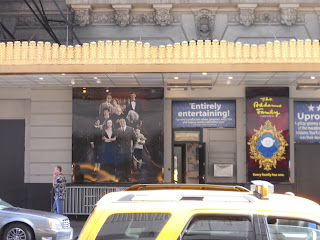 Some of the wall art 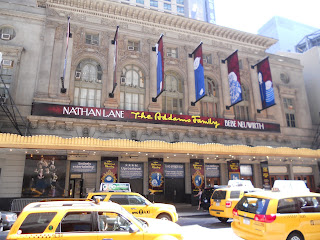 The Lunt-Fontanne Theatre
11:15ish.  We are too awake to go right to bed - the Edison is directly next door to the Lunt-Fontanne - so we join the masses at Junior's for coffee and dessert.  Us and every other theatre-goer it seems.  We got a seat out on the porch, a cool breeze blows through 45th Street.  Our boisterous conversation, including a few "shush"s from surrounding patrons, kept us there until after midnight.  We watched as one by one each marquee went out for the night.
Sunday, May 30, 2010:
We slept in... until a whopping 9:30 am.  We went down to the Cafe Edison for a quick breakfast - the chocolate chip pancakes are to die for... then went back to the Broadway New York Gift Shop.  I bought a Next Fall poster, which the show didn't have when I saw it.  But I mainly bought it to get them to pack it between stiff cardboard and a bag designed for theatre posters (for a whole $1.00 extra!).  You see, I bought window cards for Tenor and Addams at the theatre, saving a total of $15.00 over buying them at the gift shop.  I also saved another total of $9.50 by buying the programs for each at the theatre, too.  I know I sound cheap... 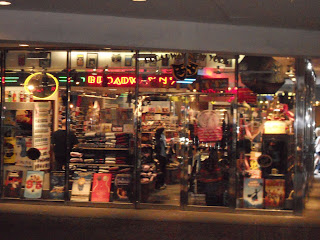 Broadway New York Gift Shop
Best for window cards and New York memorabilia
We packed, checked out, checked out bags and hit some cool stores on Broadway... the Fossil Store, the M and M Store, the American Eagle Outfitters.  Then we people watched while milling around TKTS and vicinity.  Then we trudged up Broadway - it was getting hot, and I HATE being sweaty unless I;m at the gym - toward the Broadway Theatre and Promises, Promises. I could take the anticipation, so we got the tickets we had reserved early, because I had to know if Kristin Chenoweth was going to be in the show that afternoon - she's been out recently nursing a throat infection.  Good news!  Only one of the horny businessmen was out that day! 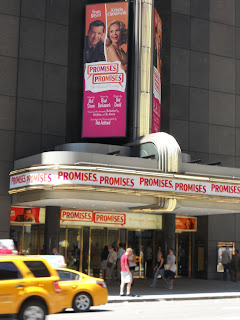 The colorful and 60's cool marquee of
the Broadway Theatre! 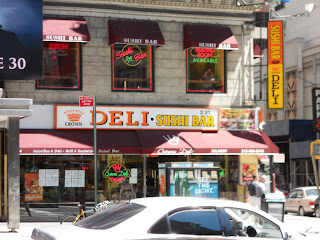 The Crown Deli, almost directly across
the street from the Broadway Theatre
Before the show, we were parched, so we went across the street to the Crown Deli, the only place in the world that I know of where you can by yogurt covered pretzels, tampons, playing cards, a turkey club wrap and sushi!  We opted for bottled water and the air conditioned seating area up top.  Now it is show time, and my buddy is about peeing himself because we will be seeing Kristin.  Our seats are about 10 feet from the stage, an excellent, full and close view.  My review will post June 4th, but I will say this:  Kristin was in amazing voice and can play angst as well as she can play perky, and Sean Hayes couldn't have acted any straighter. 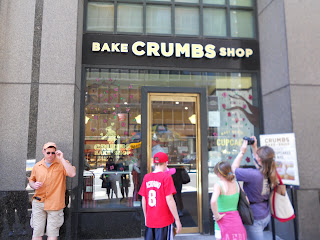 Crumbs Cupcakes - if you like chocolate,
I recommend the Brownie Cupcake.
If you look really closely, you can see
my reflection in the left side window.
The show is over at 5:45!  It sure felt shorter, but we now had to move fast to get our stuff grab a sandwich of the bus and get in line outside Madison Square Garden.  First stop, Crumbs, for a delicious cupcake, then the Edison to get our bags, then to the Signature Deli (no picture...it is covered with scaffolding on the outside).  We went there because hey have the best chicken salad and the cheapest price - chicken salad with bacon on a kaiser roll with a bag of chips and a bottle of water.... $7.95!  You can't that in Vermont, folks.  The stop was doubly worth it for me, as when I was leaving, I literally ran into Stark Sands, who was grabbing a between show bite.  He apologized to me, I blubbered out something about my fault and he picked up what I dropped and said, "have a great night!"  You know my crush on him... my weekend was made.  Then we hoped on the subway, got off at Penn Station and waited for the bus. 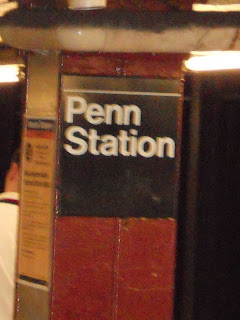 The Last Stop before home...
Nothing like a fun trip to the city with a good friend, good food and 3 new Broadway shows!
Hope I didn't bore you!
Jeff
Posted by JK at 4:35 PM