Review of the May 8 evening performance at the American Airlines Theatre.  Starring Sherie Rene Scott.  Directed by Michael Mayer, with musical direction by Marco Paguia, and staging by Michele Lynch.  Book by Dick Scanlan and Sherie Rene Scott.  90 minutes, no intermission.  Limited engagement through July 11.

Well, if the Tony Awards committee ever needed an excuse to bring back the Special Theatrical Performance award, Everyday Rapture is it, and not because it deserves that award - FAR from it.  No, it needs to reinstate the award to avoid the two Tony nominations this ridiculously laughable piece of "theatre" actually mustered.  Call it a musical if you must, but no matter what, The Addams Family included, THIS is the season's worst show by a mile.

First of all, thank God Sherie Rene Scott isn't like the character she plays in the show.  Well, I assume that's the case because she was nominated for Best Actress in a Musical, which implies that she is in fact acting, even though she is playing Sherie Rene Scott.  If Ms. Scott actually does behave in this psuedo-bubbleheaded, self-absorbed, self-indulgent way, maybe it is time to see therapy for AIDA separation anxiety.  In this "show," she makes Amneris in AIDA look down right charitable and giving.

Second of all, that this was nominated for Best Book of a Musical (by Dick Scanlan and Ms. Scott) is an affront to anyone who ever put pen to paper with Broadway as their aim.  The jokes, and I'm guessing there are many given the pauses for laughter that never really comes, are barely funny, let alone original, and only a few got the "chuckle-to-yourself" level of response.  (Had there been an intermission, I suspect the lovely American Airlines Theatre would have been even more empty by the end of the performance.) 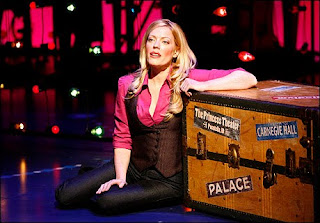 Sherie Rene Scott
The "story" is that of Ms. Scott traveling from Kansas to New York and back again and back again, she of her "kind of "Mennonite past.  The conceit of the "script" is that prior to her entrance she is given two slips of paper by a religious man of some sort - he starts out Jewish, of course, but in a flat running gag, he changes religion until her final dismissive "whatever."  Anyway, on those slips are two sayings for her to remember and to live by - a balance, if you will.  Either she is a single, tiny speck of dust or the world was made for her.  Profound, huh?

And so we spend the longest 90 minutes of recent memory listening to her patter on about religion - the most intersting thing is that she is Mennonite and that her best friend was the daughter of Reverend Fred Phelps - the idiot that attends funerals of gays and soldiers and protests that they deserved to die.  But instead she and he are given a mention or two and then only brought back up to tie things together at the end.  In between, we find out that her favorite cousin Jerome has been shunned, but she's not sure why, though he does like to sing Judy Garland songs.  Really?  Then there is the extended sequence that is supposed to be oh so revealing - the dichotomy of her love of all things Judy versus her love of all things Jesus.  (I'll admit to one chuckle when there is a montage of Jesus pictures projected that include all of the classic renderings, plus a black Jesus and one that looks like an Abercrombie and Fitch model.) 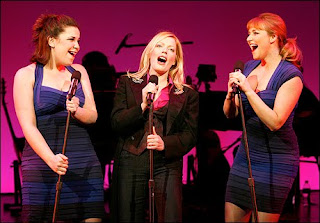 Lndsey Mendez, Sherie Rene Scott and Betsy Wolfe
Somewhere toward the end comes a sequence about a young boy (Eamon Foley) who apparently worships Ms. Scott, and has posted a YouTube video of himself lipsynching to her big number in AIDA.  She, of course, loves this, and contacts the kid, who promptly shuts her down when he refuses to believe it is really her.  In this age of fake Facebook "friends", this had the potential to make a statement, but it gets lost in its unending unfunniness.  Foley is a kid, so I'll go easy.  No.  He's on Broadway; he gets treated like everyone else.  He is the very worst kind of child actor.  Pure and simple.  His self-indulgent, unfunny mugging is so over the top it isn't even worth a slight chuckle after the first 30 seconds or so.  I didn't think you could stop a dead show cold, but apparently you can.  What is funny in a rehearsal studio isn't necessarily funny on stage.

There is one section of the show that is very sweet, and almost genuine - when Ms. Scott pays tribute to Mr. Rogers of Mister Rogers' Neighborhood fame.  You almost believe that he has influenced her life because she comes super close to sincerity here.  But 7 or 8 minutes out of 90 does not a show make.

That Michael Mayer had anything to do with this is shocking.  It looks like a thrown together Reno act - not even Vegas.  Michele Lynch's "musical staging" consists of a few girl group moves (Scott is backed, on occasion, by Lindsey Mendez and Betsy Wolfe) and lots of odd finger pointing.  I'm too in shock to do more than mention that Tom Kitt "orchestrated" the show.

I want to end by saying that as a peformer, Sherie Rene Scott is one of my favorites.  I always say I can't wait until she gets into a show worthy of her talents.  Everyday Rapture isn't it.  And it also proves that just because you sing, dance and have somewhat of a story, you don't necessarily have a musical.  They had all that and much more over at Enron, didn't they?


Comments? Leave one here or email me at jkstheatrescene@yahoo.com.
Jeff
Posted by JK at 12:01 PM