Almost a week has passed since the Tony nominations, and we all survived - ok, most of us (sorry Enron people).  I suspect that soon, there will be a few more open theatres, though.  But that's progress!  And there are a lot of new shows waiting in the wings...

Don't forget to vote in this week's Tony poll!  Every week this month there will be a different one, and all the results will be revealed at the beginning of June.  This week's poll  ends at noon, one week from today.

Click on these links to get to last week's blogs: 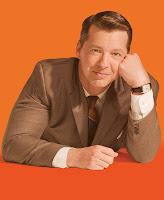 I am still seething from the Newsweek article that was published recently called "Straight Jacket" by Ramin Setoodeh, reportedly a gay writer, who writes at length about the "real reason" Promises, Promises got bad reviews was a reason no reviewer would mention: that Sean Hayes is too gay to play the role.  Aside from the fact that he and Katie Finneran were the only things the critics liked about the production, and that argument therefore makes no sense, to even imply that gay men can't play straight is as ridiculous as it is offensive.  Setoodeh goes on to say that Jonathan Groff is so "queeny" on Glee that it is "distracting."  But then he praises Groff for his chemistry with Lea Michele in Spring Awakening.  The difference?  When he was in Awakening, Groff wasn't "out"; since he joined Glee he is somehow lacking.  Doesn't that negate his initial argument?  Groff was gay whether the public knew it or not and convincingly played straight.  He goes on to say that it matters less for openly lesbian actors because straight men think its cool that two women have sex together.  Then he negates the advocacy and talents of both Portia diRossi and Cynthia Nixon: the former is ok in her role on "Better Off Ted" because she is playing a broad "straight" caricature, while the latter was already firmly successful before she came out.  Um, does anyone who watches Sex and the City  NOT believe that Miranda is straight?  They even addressed that very issue in a late season episode before it went off the air.  He also says thay Neil Patrick Harris is believable straight for the same reason as diRossi.  And suspiciously missing from this article is one of the hottest (as in popular, relevant) current Broadway actors, Cheyenne Jackson, who has always been out, and has successfully played "straight" men in every show he's done on Broadway.   Sounds to me like this writer can't enjoy any film, TV show or play without conjuring to mind who the actors sleep with offstage.  Disturbing.  Very disturbing.

The link to the full article is here.

I almost didn't even comment on this at all because it just draws more attention to an issue that is still a problem, despite huge strides made for equality.  A homophobe with an audience (and he is rumored to be gay himself) is a dangerous homophobe.  But I had to comment because of a certain response from one Kristin Chenoweth, who continues to display professionalism, spunk, and a particularly sharp balance that does not separate gay values from Christian values.  Below is a link to her response, published in its entirety on Broadway.com.  Thank you, Kristin.
Read Kristin's response here.

BROADWAY BY THE NUMBERS
42: Days until Broadway Bares 20!
35: Days until the Tony Awards!  (36 days until all the bitching about who lost starts...)
2: The number of significant changes to previously announced casting: Kelsey Grammer isn't playing Albin for 6 months after 6 months as Georges (disappointing); instead of the the cast of Race staying through August 23, everyone but Richard Thomas is leaving in June. (Race is still running?  Who does their publicity?)  Anticipation of Tony nods that didn't happen?
1: The number of show casualties since the Tony nominations came out - bye bye Enron.


Comments?  Leave one here or email me at jkstheatrescene@yahoo.com
Jeff
Posted by JK at 12:01 PM