Here we are in the middle of the lusty month of May!

Remember:  This month there is a new poll every week that closes at noon on each Saturday.  Please vote!


THE STINK OF CONTROVERSY HAS ATTACHED ITSELF TO RAGTIME 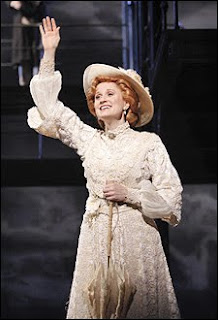 Noll in Ragtime
It’s been a rough couple of days for you if you are associated with the short-lived-but-highly-acclaimed-though-less-acclaimed-now revival of Ragtime.
First, Santo Loquasto’s Tony nomination for Outstanding Costume Design of a Musical was taken away because it was determined (too late) that the designs didn’t differ that much from the original production. Um, duh. You could tell that from the picture. In fact, I thought the Kennedy Center might have rented the originals or had them duplicated.
Next came news from the Drama Desk Awards that the same nomination for costumes, as well as their nomination for William David Brohn’s orchestrations were rescinded because neither were significantly different from the originals. Again, duh. Now, I didn’t see it, but what I saw of it on the Macy’s Thanksgiving Parade segment, sure seemed lip-synched to the original score, and if not, it was seriously close.
It is a shame and an embarrassment on both sides, if you ask me. Isn’t it incumbent upon producers to withdraw names from consideration for such things before nominating committees make their selections? And you are telling me that no one from either awards organization noticed that Ragtime might have been staged differently, but that some of the other components weren’t nearly as original as critics praised?
What’s next? Christiane Noll’s performance too much like Marin Mazzie’s? Not to worry, Ragtime producers. Announce a tour or a return engagement and all will be repaired.
THE RACE GOES ON 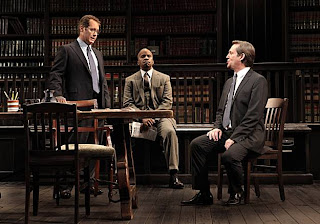 Spader, Grier and Thomas in Race
I have to hand it to the folks over at Race.  The little show no one talks about returned its investment months ago, announced an extension, got a paltry single Tony nod, and promptly announced that all but one of its original stars was jumping ship in June.  Maybe if there were more Tony nods, say for Best Play or Best Actor, they might all have stayed to the end.  But just when it looked like the race was over, replacements were announced.  First, congratulations to Kerry Washington's understudy, Afton C. Williamson, for getting the gig!  That is always so nice to see.  Then, two relatively big names were announced, and they are both even good actors, which is also nice to see in this age of stunt casting without merit.  Eddie Izzard will be replacing James Spader, while Dennis Haysbert (The Allstate guy, the President on 24) will replace Tony nominee David Alan Grier.  With Richard Thomas staying on, the finish of this Race might just be worth watching!
GRAB A VINE! TARZAN IS BACK! 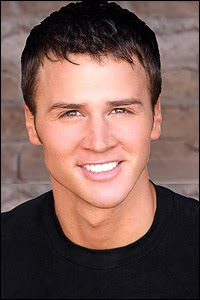 James Royce Edwards
I tell you, there is something about a guy in a loin cloth singing Phil Collins tunes!  First, the incerdibly hot and extremely talented Josh Strickland was plucked from near obscurity to play the vine swinging hero, and now in the very first regional production of the (in my opinion under-rated) Disney musical, Tarzan, the role will be played by the equally good-looking and very talented James Royce Edwards.  The show will have its regional debut in Utah of all places this summer. 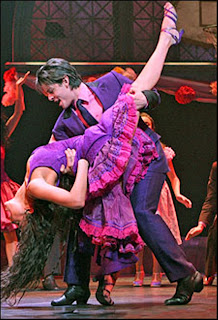 When will she "dance at the gym" again?
Poor Karen Olivo!  As you have no doubt heard, she broke her foot during the May 8th performance of West Side Story, meaning she will be out for the forseeable future.  Her very able understudy, Natalie Cortez, who sang and danced the Anita role on the Macy's Thanksgiving Parade last year, and who dazzled as Morales in the A Chorus Line revival, has taken over the role.  The production announced that a permanent replacement would be announced soon.  I say let Cortez keep the part! 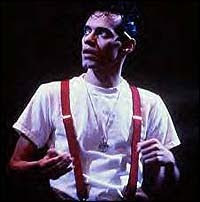 Marc Anthony in the original
The Capeman
One of my favorite flops of all time, The Capeman, looks to have a revival shortly, directed by none other than Diane Paulus, the terrific director how brought Hair back to Broadway in a major way.  The Paul Simon musical is a complex and daring work full of dark themes and much joy.  It played a very short run at the Marquis Theatre during the 1997-1998 season.  I maintain that the show was way ahead of its time, the critics called it a dark mess.  The sets were amazing, all from bizarre points of view, the dancing spectacular and the performances riveting.  Of course, there was much controversy in the Latin/Hispanic community...

BROADWAY BY THE NUMBERS
10 Billion: The number of dollars Broadway added to the New York City coffers during the 2008-2009 season.
3: The number of award nominations Ragtime lost this week.
2: The number of those losses suffered by Santo Loquasto.
1: The number of Tonys Loquasto is still up for - designing Fences. 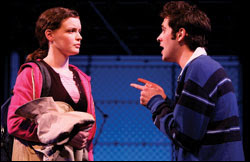