I am ashamed of myself or getting so caught up in the Tony hooplah, that I did not stop to recognize the passing of a truly great talent on May 2, 2010, Lynn Redgrave.  I count myself fortunate to say that I saw her perform, and I actually got to meet this wonderful lady.

I only had the priviledge of seeing Lynn Redgrave perform live one time.  It was in the spring of 1987, in a play by A. R. Gurney, Jr. called Sweet Sue.  In it, Ms. Redgrave played one of two actresses playing the title character.  The other was Mary Tyler Moore.  The conceit of the play was that it was four actors playing two roles - two actresses played artist Susan simultaneously playing the scene and her conscience; two actors played college student Jake in a similar fashion.  Briefly, the story has Jake (John K. Linton and Barry Tubb) working for Susan during summer break from college - he is one of Susan's son's friends - and she and he dance around an attraction they have for each other.  It all comes to a head, so to speak, when Susan has convinced Jake to pose nude for her.  Why I bring this up, will be clear shortly.

The play was funny, sharp, and relatively controversial for the 80's.  Both Ms. Moore and Ms. Redgrave were a draw at the time; Ms. Moore for her TV career past, and Ms. Redgrave for playing Georgy Girl, being a Weight Watchers spokesperson ("This is living!") and for starring in a pretty popular sit-com that had just folded, called House Calls.

I was in the city with a close college friend and we were celebrating the end of junior year with a week of Broadway shows - another blog for another time.  Anyway, the day before we were to see Sweet Sue, the show made headlines because someone had vandalized the ad display outside the Royale Theatre.  It was a very large picture of a naked Jake sitting with his back to us, while both Susans oogled him.  Granted, the guy had a seriously nice rear end, but to steal the photo!!??  So early that afternoon, we were headed to lunch, walking down 45th Street, and we noticed that some workers were replacing the photo.  The street was pretty empty for an early Wednesday afternoon.  So we watched.  In the background, I noticed a cab pulling up to the theatre, but didn't think much of it.  That is until I could sense the person who had just exited the cab walk up behind us. 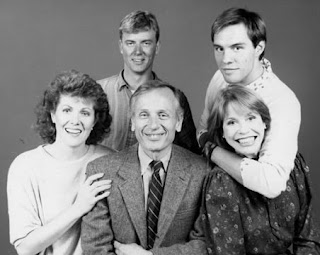 The cast of Sweet Sue: (clockwise from lower left) Lynn Redgrave, Barry Tubb,
John K. Linton, Mary Tyler Moore, and A. R. Gurney, Jr.
"Isn't that just the damnedest thing," this low growl of a British voice purred almost directly into my ear.  "Who'd have thought a tough New Yorker would get so crazy over a picture of a some guy's bum!?"  I turned, and there stood Ms. Redgrave, smiling and shaking her head.  "Are you boys coming to see our show?"

"Well, I certainly hope you enjoy it."

"Will you look at that?" she exclaimed.  All three of us turned back to the picture.

"What's wrong with it?" he said.  (I still couldn't speak.  Seeing celebrities was still so new then for me...)

"They used the picture with John in a towel!"  Damned if they didn't change the picture.  I guess they wanted to stop the vandalism.  "Ah well," she smiled.  "At least Mary and I look happier in this photo."

Then she turned to us both and said, "thank you so much for coming to see our little play.  Please be sure to stay after and let me know what you thought!"  And she was off...

Finally, I could speak.  "Oh my God!  That was Lynn Redgrave!"

Of course, we stayed after at the stage door.  And she looked so pleased that we actually waited.  "Did you enjoy it?  The house was great today!"

"He does talk!" she said to my friend.  We all laughed.

And then she handed each of us a black and white photo of the very scene that caused all the commotion - with no towel - signed by the entire cast.

"Wow!  Thank you!" we both practically screamed.

"You enjoy!  I just wish more young people like you came to the theatre.  Well, I'm off for a quick bite before the next curtain.  Goodbye, now!"

And I thought sitting two seats behind Lucille Ball and Bea Arthur at Les Miserables would be the highlight of that trip.  Boy, was I wrong.

Sadly, I never made it back to see another of her shows.  I will regret that forever.  She is among the classiest people I have ever met.  Would that more of today's "Broadway stars" were like her.

Rest in Peace, Ms. Redgrave.  And thank you for everything.
Posted by JK at 5:00 PM