A Weekend in the City, Saturday Afternoon

THIS IS IN TWO PARTS BECAUSE I HAVE TOO MANY PICTURES TO SHARE FOR ONE ENTRY, APPARENTLY.  Sorry!

As I've Tweeted and mentioned for day prior to this, I had a big weekend scheduled in New York City this Memorial Day.  And like anything you really look forward to, it took forever to get here and was over in two Addams Family snaps!  I got a new camera and I apologize if some of the photos below are a little fuzzy.  My hands were sweaty sometimes and well, my hands shake a tad, so... and only figured out the "shake adjustment" feature on the camera during the bus trip home!  Ah well... Here is my pictorial essay on my "Weekend in the City."  Enjoy.

Sunny, breezy, increasing warm, but not unbearable... up at 5:30 to pack (ok, I procrastinate), my buddy picks me up at 6:30... Megabus departs a bit after 7 and we are in the city by 10:45! Bad knees (me), allergies/asthma (my buddy) converge to force the trip uptown via the subway under Madison Square Garden.  Next stop  42nd Street Station, 44th Street exit! 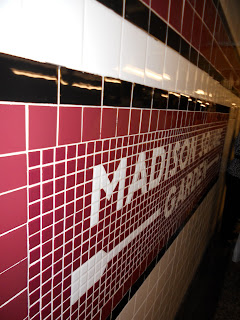 The tiled wall at the platform for the A,C or E train
First stop, Hotel Edison where we will be staying... small, but nicely refurbished suite! Splitting the cost wasn't too bad, and the location made the cost worth it! 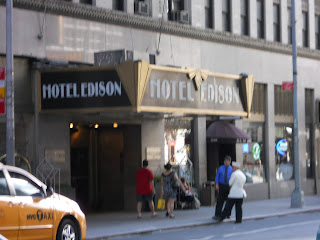 47th Street Entrance
(Rock of Ages is just down the street, and Race is across the street)
Here are the art-deco style paintings in the lobby.  The whole hotel is that style, just as it was when it was built.  Funny to think that when my gandparents spen their honeymoon there, it was considered one of the swankiest hotels in Manhattan! 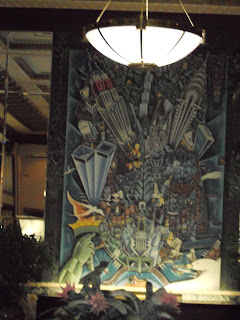 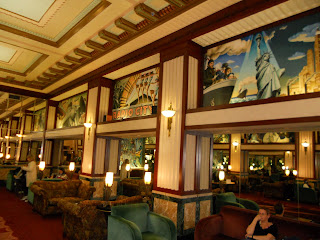 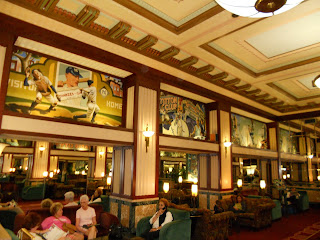 I love the columns and the detail work in the ceiling, too.
Next stop, lunch!  One of my favorite places to eat BBQ, Virgil's Barbecue Restaurant.  I recommend going early, no seating wait and everything is super fresh.  The Brisket Melt is so tender you barely have to chew it!  I'm not a potato salad fan, so I recommend swapping that for their homemade fries or their homemade mac and cheese! 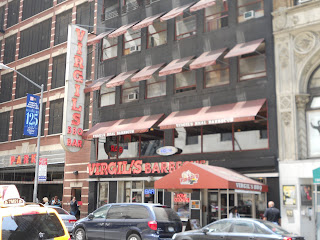 Virgil's is on 44th Street on the opposite side of Broadway
as most of the theatres and is three doors down from ABC Studios.
Still some time before our first show, so we strolled in the sunshine in Times Square.  I love the whole pedestrian mall thing, though the stupid pedestrians who don't read the street crossing signs pretty much deserve to get run over...LOL! 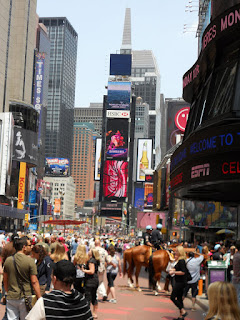 Beautiful day!
Now I get that excited feeling in the pit of my stomach... it is almost show time.  So we walk over to 45th Street, and take in the view of all the theatre marquees in a row.  (When I was a kid, I thought that's what Broadway was - a lobg street with all of the theatres side by side...) 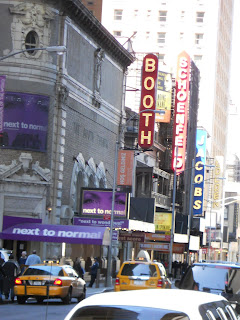 It looks soo much better than the last time I was here.
No more construction scaffolding!
And now the moment I've been waiting for... the first show!  Lend Me a Tenor at the Music Box Theatre.  We sat in the front row!  Not always ideal, but for this it was great.  The deatils of the set, costumes and the actors' facial expressions were awesome!  And the whole cast was in!  (My review of the show will post Wednesday, June 3rd.) 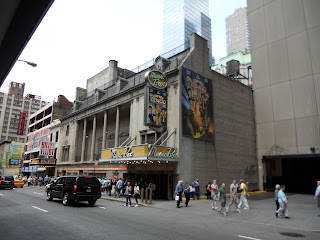 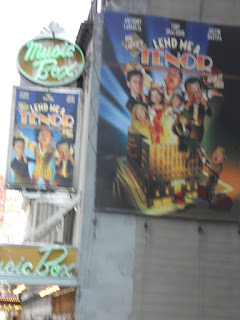 A close up of the famous Music Box marquee and
the Lend Me a Tenor logo
(See how shaky my hands were?)
After the show,  a quick stop at the Broadway New York Gift Shop, under the Marriott Marquis Theatre to buy a birthday card, remembered during intermission.  I love the breezeway that isn't the drive way, full, from floor to ceiling of bright blue Come Fly Away ads, photos and quotes - plus ol' Blue Eyes crooning "My Way." 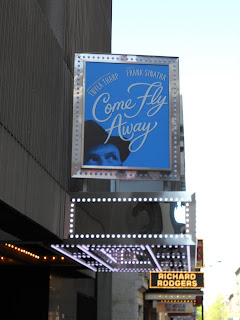 The breezeway is just under
the new Marquis Theatre marquee 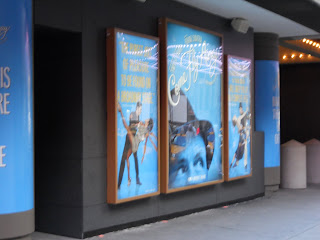 These ads on the street are smaller (much smaller)
versions of what you see in the breezeway, just around the corner. 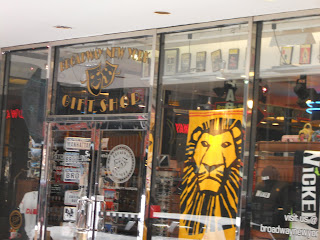 The 45th Street entrance to the
Broadway New York Gift Shop
Click here to continue this blog about what happened Saturday night and Sunday afternoon!
Jeff
Posted by JK at 4:00 PM