The Best Musical of 2010 Didn't Get a Single Tony Nomination

All of the arguing, finger pointing and assessing of blame over who got Tony nominations, who didn't get Tony nominations, who should have, who shouldn't have...then the sniping over the winners yet to come (my favorites are those who each year "hate" a show, then it wins and "it was always their favorite... blah blah blah.  It has all started.  It is both my favorite time of the theatre season and my least.

This season is even more difficult (and potentially more prone to ugliness, or worse, no reaction at all) because for the first time in awhile there are no real standouts in any of the four main categories: Best Play, Musical and revival of each.  I can't remember the last time that critics were so, um, kind, to so many shows.  None got universal raves and, except for Bye Bye Birdie in the fall and The Addams Family in the spring, none got across the board pans.  The result is every show has something going for it, but no show is extra special in the good department, according to the critics, at least.  Theatregoers are having their say, to be sure.  Good luck getting a decent seat in the Lunt-Fontanne cave where The Addams Family is, but pity the fool that pays full price to any of the nominees (that are still running) in the Big 4 categories.  I hope the nominations at least bring a bump in the BO for these shows...

But the real problem is that the musical has become relevant in this country again, but probably in a way that Broadway never dreamed.  The movie musical, thanks largely to Chicago, is back in vogue, even if the hit to failure ratio is about 50-50.  But who would have thought that the musical would make a comeback on television - regular, not cable, television, at that!  And on the smallest of the big 4 TV networks.  Why is this a problem?  If you are reading this blog, you probably think it is a blessing.

It is a problem because this season's Best Musical is Glee. 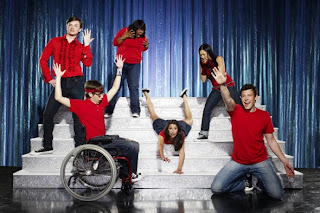 It has by far the best book - engrossing, funny and outrageous plotlines that are ever so carefully grounded by touching realities.  The gay boy loves the football star, their parents fall in love instead.  The diva of the show choir is obssessed with stardom, but is weekly willing to share the spotlight.  You actually feel for the pregnant cheerleader, the bad boy, the outcasts.  You don't feel pity for the overweight girl or the wheelchair bound handicapped kid - because they are as important and as unimportant as anyone else.  The "adult" cast is just as perplexing:  the glee club advisor is almost Quixotic in his quest for greater glory, his girlfriend is a guidance counselor with more issues than a PMSing beauty queen, and the show has created the most amazing villain - the best kind, really - she is viscious, mean, unabashedly un-PC, and so witty you have to love her, if not respect her.  And then they go and give her a heart to boot.

It has the best score - the ultimate jukebox musical score that is.  Writers of future jukebox musicals should be taking copious notes.  Why this works, because they are usually thematically-driven, and they are given clever AND meaningful context, which is why it works 99.9% of the time.

It has the best actor - Matthew Morrison (Mr. Schuester) who plays the matinee idol with angst to perfection, and each flaw his character reveals just makes him better.  Plus he can sing a variety of styles and dances like Astaire.

It has the best actress - Lea Michele (Rachel) who is simply an amazing triple-threat.  Who knew our little Wendla was so bombastic.  Please come back soon...

It has the best supporting actors - Cory Monteith,  (Finn) the dumb, but getting smarter, jock with a golden voice and heart to match; Mark Salling, (Puck) the bad boy who will nail any girl he chooses, but then feels bad for it; and Chris Colfer, (Kurt) the struggling gay kid who is aware enough to survive and who manages not to be a sad cliche all at the same time.  All three are great singers and dancers, and say what you want about their acting, it is hard to find three characters so fully developed and so emotionally available.

It has the best supporting actress lead by the indomitable Jane Lynch as Sue Sylvester, the tyrannical cheerleading coach, who can cut you like a knife with a glare or an amazingly spot-on and still completely inappropriate remark.  Then, too are Amber Riley - (Mercedes) the sassy African-American girl who realizes her place in the pecking order and does everything she can to fight it all while being grateful for having a place at all; and the beautiful, talented and brilliantly understated Dianna Agron - (Quinn) the fallen from grace former head cheerleader, pregnant and searching for meaning in her life.

Best choreography, by far... every show features stunning all out production numbers and even better upclose numbers and montages that make the hair on your neck stand at attention.

Best orchestrations, by far... anyone who can "mash up" two or three totally unrelated songs so that they blend together gets my vote! 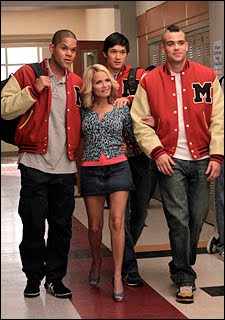 And then there are the guest stars.  Lots of Broadway folks have guested - Debra Monk, Victor Garber, Kristin Chenoweth (get another Emmy ready for her), Idina Menzel, and the stunningly transformed, confident, sexy and uber-talented Jonathan Groff, to name a few.  But you know you are big when Hollywood and music types are fighting to be included, not the least of which is Madonna.  Then there is Olivia Newton-John, and the newest faculty member Molly Shannon.

Then there are the nods to Broadway that make it truly special.  What other show has its star-crossed lovers meet at the Stephen Sondheim section of the school library, which includes the vocal score to Company.  Or the inside of the diva's bedroom with rotating Playbills and show cards on her walls - last night there was Rock of Ages, Wicked and the Alfred Molina Fiddler on the Roof (which Michele appeared in).  I'm surprised there hasn't been a Spring Awakening seen yet.  And what other show features angst-ridden teens wallowing in self-pity while the underscoring of "Hello Twelve, Hello Thirteen" plays in the background?

And so producers of Memphis, Fela!, American Idiot, and Million Dollar Quartet, which ever one of you gets the silver medallion, just remember, you still aren't the best musical of 2010.