It takes place on W. 44th Street (home to The Phantom of the Opera, Memphis, Rock of Ages, and soon, Hugh Jackman: Back on Broadway and On a Clear Day You Can See Forever) and will "spill out into Times Square."  The event will take place light drizzle or shine on Sunday, September 25 from 10AM - 7PM.

The Flea Market features booths from most of the Broadway shows, selling everything from home made baked goods to posters to props actually used in the show.  Other booths sell vintage souvenirs, one of a kind photos, and long out of print cast recordings on vinyl, cassette and CD.  The array of things would be impossible to list here.  But the best thing is that you don't have to be rich to find something from your favorite shows - items start at under $1, and the later it goes, the better the bargains! 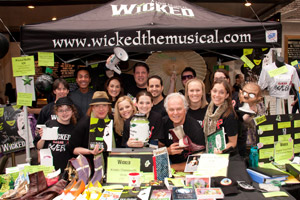 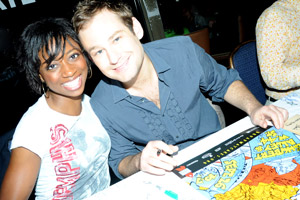 For slightly more money, you can pay to go through the photo booth and have your picture taken with today's biggest Broadway and daytime TV stars.  Or you can pay a flat fee and get autographs from your favorite celebs as you walk the autograph line.  There are usually three or four sets of stars, and you pay each time you walk through.  But it is a chance to say hi and get signatures from almost 100 stars! 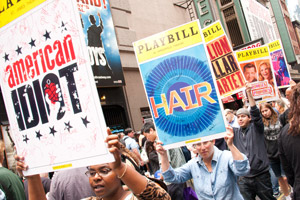 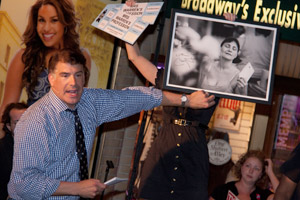 But if you do have extra cash and really want to contribute to the cause, there is the Grand Auction, where you can bid on huge prize packs from all the shows, one of a kind personalized items from Broadway legends like Bernadette Peters and Angela Lansbury.  Several shows are auctioning off walk on parts and backstage experiences.

If you've never been before, you really should try it.  It has become an annual tradition for Mike, a close friend of ours, and I.  We get there bright and early and check out all the tables before we buy anything Sometimes you can find the same thing, only cheaper, at different booths.  And we have also found that we've purchased an item we liked, only to find something we've LOVED later, but couldn't afford it or carry it!  Then we grab a quick bite and head off to a big Broadway show.  So far, it has always been a show we are re-visiting, or that one of the three of us somehow missed.  Previously, it's been The Lion King and Wicked.  I'll tell you all about it early next week! 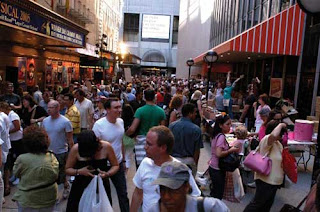 There are always huge crowds of theatre lovers!

For more information, including pre-bids for auction items, a full list of celebrity autographs and times, as well as a look at the tables and auction items go to http://www.broadwaycares.org/home.


Rate this blog below and leave your comments here, by email at jkstheatrescene@yahoo.com or Tweet me!
Jeff
3.026
Posted by JK at 12:00 PM